Who’d have thought M. Night’s ‘The Visit’ would be so funny? 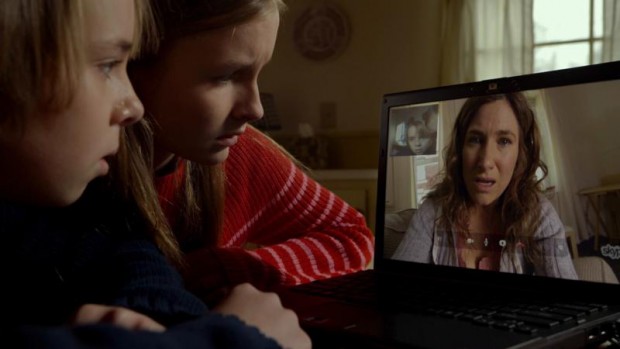 Ed Oxenbould, Olivia DeJonge and Kathryn Hahn star in a scene from the movie "The Visit." (CNS photo/Universal)

NEW YORK (CNS) — Humor is not the first thing one associates with an M. Night Shyamalan movie. Since he captivated audiences in 1999 with the supernatural puzzler “The Sixth Sense,” the writer-director has specialized in deadly serious tales involving paranormal phenomena.

Although a sense of playfulness is detectable in his best efforts, the adjective ponderous springs to mind when considering his body of work.

Which is why it’s so surprising that “The Visit” (Universal) elicits abundant laughter, most of it by design. As expected, the film is quite spooky, offering ample opportunity for viewers to be startled and shriek. But the comedy is integral and more than a relief valve. Unfortunately, because it triggers a significant amount of unintended laughter as well, Shyamalan’s latest can also feel like a parody of a horror-comedy. Too often viewers will find themselves caught between laughing with the movie and laughing at it.

Thanks to its multiple tones and inability to fully coalesce, “The Visit” is a head-scratcher, albeit an entertaining one. On the horror side of the equation, while not especially gruesome or graphic, the scares are effective. There’s enough other material to render it inappropriate for most adolescents, however.

Two talented young actors play the lead roles. Olivia DeJonge is 15-year-old Becca, a budding moviemaker who tries to gain insight into her broken family by filming a documentary. Her mother (Kathryn Hahn) left home at 19 after falling for an older man, whom she married and with whom she had two children. After Becca came Tyler (Ed Oxenbould), now an aspiring rapper with a germ phobia. Five years ago, their father took off and their parents subsequently divorced.

Their mother has never reconciled with her parents, but has agreed to send the children for a weeklong visit in the Pennsylvania farmhouse where she was raised. A keen student of film, Becca wants answers and is committed to documenting the trip, with Tyler’s sometimes-reluctant help. Armed with cameras, a laptop computer and other equipment, they meet their grandparents for the first time.

While warm and welcoming, Nana (Deanna Dunagan) and Pop Pop (Peter McRobbie) exhibit peculiar behavior from the outset. Nana, who plies them with delicious food and baked goods, is prone to night terrors and sudden mood swings. In addition to hiding something mysterious in his shed, Pop Pop insists the kids avoid the basement and never leave their room after 9:30 p.m.

Attributing their strange conduct to the mental and physical infirmities brought by old age won’t suffice. The atmosphere of dread and menace is heightened by the wintertime locale, the neatness of the colonial-era home, and the existence of a health care facility nearby where Nana and Pop Pop volunteer as counselors.

Tyler, who has adopted the persona of an inner-city rapper, is responsible for the lion’s share of levity and Oxenbould does an excellent job of mining the wit in Shyamalan’s script. Both actors superbly convey the rapport between the siblings.

Becca’s movie-within-the-movie is not an original device (see “The Blair Witch Project” and “Paranormal Activity” series). Yet the jumpy hand-held photography it occasions is well executed and the technical work overall is unimpeachable. If only Shyamalan didn’t try to cover so many bases and focused more on his screenplay. The big twist is functional yet lacks sufficient explanatory power, even allowing for the genre’s low plausibility standards.

In his attempt to avoid presenting a run-of-the-mill horror-comedy, Shyamalan weaves in several weighty themes. “The Visit” can be read as a mild critique of the dangerous allure of storytelling — of getting so caught up in communicating a narrative that one ignores real life’s actual perils and predicaments. More specifically, he draws attention to our obsession with experiencing life through a lens, screen or other electronic device. Becca is so absorbed in the process of creating her documentary that she’s blind to the fact that something is horribly amiss with her elderly relations.

Shyamalan also tacks on a laudatory message about the power of forgiveness and the necessity of overcoming anger. Nevertheless, any lesson or earnest sentiment is eclipsed by the humor and scare quotients of “The Visit.” Presumably, that bodes well for its commercial prospects.

The film contains much terrifying behavior and some nongraphic violence, an instance of rough language and one rough gesture, some crude and crass language, several instances of profanity, brief rear female nudity, a drug reference, a suicidal character, and some sexual banter, mostly contained in rap music lyrics. The Catholic News Service classification is A-III — adults. The Motion Picture Association of America rating is PG-13 — parents strongly cautioned. Some material may be inappropriate for children under 13.

PREVIOUS: Hour and a half in heaven, no more than a glimpse

NEXT: Fascinating format can promote understanding among religions