Hour and a half in heaven, no more than a glimpse 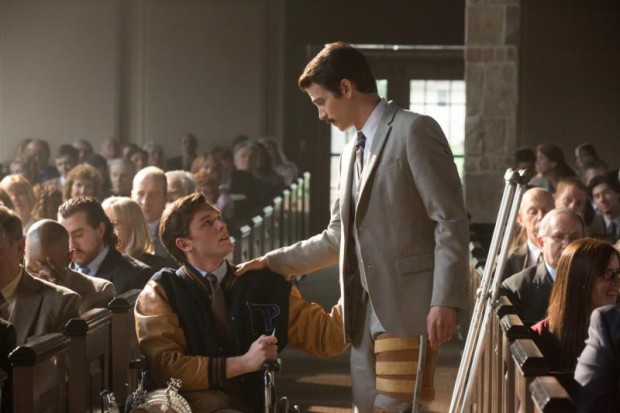 Trevor Allen Martin and Hayden Christensen star in a scene from the movie "90 Minutes in Heaven." The Catholic News Service classification, A-II -- adults and adolescents. Motion Picture Association of America rating, PG-13 -- parents strongly cautioned. Some material may be inappropriate for children under 13. (CNS photo/Giving Films)

NEW YORK (CNS) — As its title suggests, a trip to the pearly gates and back is the highlight of “90 Minutes in Heaven” (Samuel Goldwyn). Writer-director Michael Polish’s drama is based on the true story of a Baptist minister and his near-death experience.

Don Piper lived to tell the story of his celestial journey in a 2004 memoir, which has sold 7 million copies. The screen version of his best-seller underlines the power of Christian spirituality and the rewards of perseverance.

As portrayed by Hayden Christensen (light years removed from his starring turn in the “Star Wars” prequels), Don is an earnest and sincere pastor. He’s also a loving husband to spouse Eva (Kate Bosworth) and an attentive father to his three children.

In 1989, returning home after speaking at a prayer meeting, Don has his date with destiny. On a rain-swept bridge, an 18-wheeler plows into his car, crushing the vehicle. Don is pronounced dead, and his car — with Don still trapped inside — is covered with a tarp, awaiting removal.

As the eponymous time period passes, Dick Onarecker (Michael Harding), a fellow minister, approaches and asks permission from law enforcement to pray over the body. He proclaims that Don’s sins are forgiven, sings a song of praise over the supposed corpse — and then, inexplicably, Don stirs to life.

Don himself is bewildered and bemused, for he has spent the past hour-and-a-half in ecstasy above the clouds. In keeping with other near-death reports, heaven is portrayed as a place bathed in golden light, where loved ones approach to greet the new arrival. “Heaven was, without a doubt, the greatest family reunion of all,” Don says.

However, just as he is about to pass through the portals of paradise — approached, oddly enough, via a yellow brick road — Don is returned to earth.

What follows is Don’s personal Calvary, a torturous and protracted journey to recovery from devastating injuries. The physical pain is unbearable, and the emotional toll on his family even greater.

Over four months in the hospital and 34 surgeries, Don is wracked by his supernatural experience, telling no one of his vision. “Survival was going to be difficult, because heaven was so glorious,” he admits. He longs to return to the afterlife, rather than stick around on Earth.

It is up to Eva and a support system of family and friends — who organize around-the-clock prayer vigils — to restore Don’s will to live.

A feisty hospital volunteer, Jay (Fred Dalton Thompson), doesn’t mince words. “You’re denying others the right to help,” he tells Don. “Let them in! People are God’s hands to meet your needs and answer your prayers.”

They do, and eventually Don decides to share his “sacred secret.” But here, “90 Minutes” departs from a similar faith-based movie, 2014’s “Heaven Is for Real.”

By contrast with that earlier title’s lively stories concerning 4-year-old Colton Burpo and his “visits” with Jesus, we learn precious little of Don’s observations. The mere glimpse of “heaven” given us in this movie is, ultimately, unsatisfying.

Nonetheless, “90 Minutes” does offer an inspiring lesson for adults and older teens about faith, hope and persistence. Despite some hints at underlying theological differences, moreover, considered as a whole, the film’s evangelical viewpoint on prayer and the promise of eternal life is mostly consonant with Catholic doctrine.

The film contains disturbing images and some mature themes. The Catholic News Service classification is A-II — adults and adolescents. The Motion Picture Association of America rating is PG-13 — parents strongly cautioned. Some material may be inappropriate for children under 13.

NEXT: Who’d have thought M. Night’s ‘The Visit’ would be so funny?