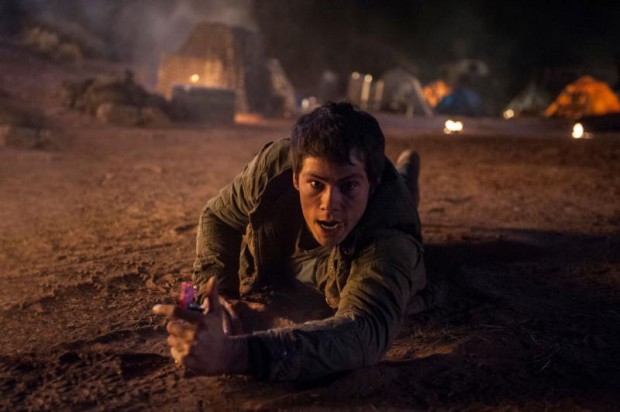 Dylan O'Brien stars in a scene from the movie "Maze Runner: The Scorch Trials." (CNS photo/Fox)

NEW YORK (CNS) — The forecast is bleak in “Maze Runner: The Scorch Trials” (Fox). This adaptation of the second novel in James Dashner’s sci-fi trilogy about teens running for their lives in a post-apocalyptic world calls for a permanently dusty atmosphere with an unwelcome windfall of predatory zombies.

Wes Ball returns to direct this ponderous sequel to 2014’s “The Maze Runner,” picking up where the last film left off. The relentless pacing and nonstop action leave little time to decipher the convoluted yet insubstantial plot, which is probably a good thing.

When our youthful heroes are not too busy running (which is rare), they espouse the virtues of loyal friendship and self-sacrifice. Unfortunately, most of their adult counterparts are evil and untrustworthy. This “hope I die before I get old” mentality seems to be de rigueur for the young-adult genre these days.

Like its predecessor, “The Scorch Trials” is essentially a mash-up of “The Hunger Games” and “Divergent” series — but this time with a good dose of “Mad Max” and “Night of the Living Dead” added to darken the formula still further.

For those coming into the franchise cold, the narrative centers on a band of intrepid adolescents known as “Gladers.” Led by relative newcomer Thomas (Dylan O’Brien), the Gladers have escaped the mysterious maze of the title. Their confinement within that vast labyrinth turns out to have been an elaborate initiation exercise organized by the so-called Creators.

In a case of the fire replacing the frying pan, however, the Gladers’ dystopian hazing has only gotten worse. They’re now lab rats within the aptly-named “World in Catastrophe: Killzone Experiment Department,” or WCKD.

“Wicked” indeed. For the Gladers have something the Creators, led by Ava (Patricia Clarkson), desperately need: their blood. It seems they have a natural immunity to the vicious plague that has overrun — and devastated — the world beyond the laboratory.

This so-called “flare” virus, named after the solar flare that scorched the Earth and destroyed everything in sight, turns people into flesh-eating undead types known as “Cranks.” (To paraphrase an old song, you’d be cranky, too, if it happened to you.)

Unwilling to be bled dry like their peers, the Gladers escape and take their chances outside in “The Scorch.” There they hope to locate, and unite with, a group of resistance fighters whose exploits have become mythical.

The violence quotient is ratcheted up as the Gladers evade Cranks and WCKD soldiers, and scale ruined skyscrapers stacked high like children’s blocks. Soon they encounter a community of survivors with gang boss Jorge (Giancarlo Esposito) and his shotgun-toting sidekick, Brenda (Rosa Salazar), at their head. Jorge’s motives are unclear, but Brenda soon takes a shine to Thomas.

Viewers of faith will note some vaguely Christian symbolism in “The Scorch Trials.” This ranges from the life-giving quality of the Gladers’ blood to the name of the aforementioned resistance force, “The Right Hand.” Yet these hints at spirituality represent mere incidental curiosities along the path of a largely unrewarding slog through a grim, terror-ridden future.

The film contains relentless, often intense violence, including torture, gory images, drug use and some profane and crude language. The Catholic News Service classification is A-III — adults. The Motion Picture Association of America rating is PG-13 — parents strongly cautioned. Some material may be inappropriate for children under 13.

NEXT: Long, winding road of church in Philadelphia comes to TV