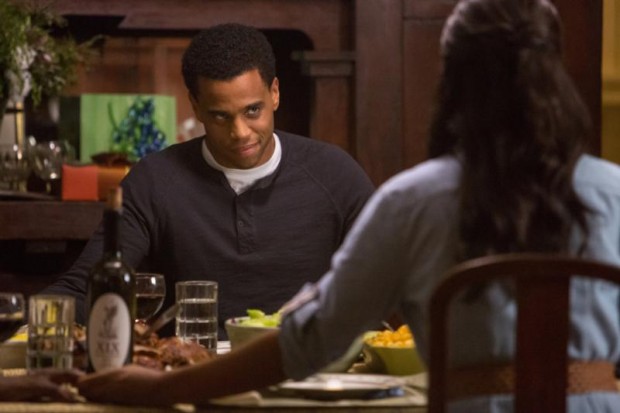 Michael Ealy and Sanaa Lathan star in a scene from the movie "The Perfect Guy." (CNS photo/Sony)

NEW YORK (CNS) — The stale predictability and slow pacing of “The Perfect Guy” (Screen Gems) might appeal to people who prefer generic thrillers without twists and turns.

Leah (Sanaa Lathan), a successful executive in Los Angeles, has a dull and commitment-phobic boyfriend, Dave (Morris Chestnut). She has a solid moral core, and wants to take the next step with marriage and children. He’s seen too many divorces in his own family, so marriage is a nonstarter for him, and they break up.

Soon, she meets handsome and seemingly gallant Carter (Michael Ealy) at a bar, they have a couple of whirlwind dates, and he even impresses her grumpy, suspicious father, Roger (Charles S. Dutton).

Bliss, in these plots, is merely a facade, and after Carter flies into an unexpected rage and beats up a gas station attendant, Leah calls off the relationship.

Carter, of course, can’t deal with that. Having worked as a corporate espionage specialist, he’s skilled at cyberstalking, and on top of that, we’re informed that he’s also bipolar.

The ensuing mayhem consists of him monitoring her phone calls, breaking into her house, installing video cameras, using her toothbrush (It’s supposed to be creepy, but plays like bad comedy), and even stealing Leah’s cat.

Is he in her closet? Under her bed? Does she walk around a lot alone in the dark? Is there a suspicious neighbor? Yep, yep, yep and yep.

Leah goes to the police, gets a restraining order and reconnects with Dave, but according to this formula, none of that has the desired results before the predictably violent ending.

The film contains two implied sexual situations, physical violence and fleeting crude and profane language. The Catholic News Service classification is A-III — adults. The Motion Picture Association of America rating is PG-13 — parents strongly cautioned. Some material may be inappropriate for children under 13.

NEXT: Maze Runner: The Scorch Trials