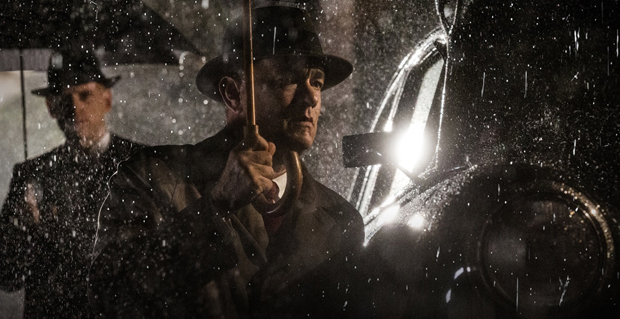 NEW YORK (CNS) — Few incidents in the long history of the Cold War were as rich in personal drama as an exchange of prisoners that took place on a Berlin bridge early on the morning of Feb. 10, 1962.

The subjects of the tense swap were a duo of high-profile captives from either side of the Iron Curtain: KGB agent Rudolf Abel and downed U.S. spy plane pilot Gary Francis Powers.

The events that led up to this rare face-to-face engagement between the forces of East and West are skillfully chronicled in director Steven Spielberg’s outstanding thriller “Bridge of Spies” (Disney). As his film shows, the hard-won bargain underlying the trade was, in large part, the work of a seemingly unlikely broker, New York corporate lawyer James B. Donovan (Tom Hanks).

A specialist in insurance cases, with limited experience in the criminal field, Donovan is surprised to learn, as the movie opens in 1957, that the American Bar Association has chosen him to represent Abel (Mark Rylance) following the Brooklyn-based operative’s arrest by the FBI. It’s obviously a thankless task, but at the urging of his senior partner, Thomas Watters (Alan Alda), Donovan reluctantly accepts.

Despite the strong bias of the presiding jurist, Judge Mortimer Byers (Dakin Matthews), and the fears of retaliation expressed by his devoted wife, Mary (Amy Ryan) — concerns that turn out to be well-grounded — Donovan gives the case his all. In fact his doggedness far exceeds the strictly pro-forma defense Watters and the ABA had expected him to provide.

When Abel is nonetheless convicted, Donovan appeals all the way to the Supreme Court. Meanwhile, as scenes interspersed with Donovan’s legal maneuverings show us, the CIA is busy developing the U2 surveillance plane to photograph Soviet military installations, and training Air Force officers like Powers (Austin Stowell) to pilot the cutting-edge craft.

Thus the stage is set for Donovan’s transition from advocate to negotiator. At the behest of famed CIA director Allen Dulles (Peter McRobbie), Donovan agrees to serve as the government’s unofficial representative in a secretive effort to reach a deal for Powers’ release.

Screenwriters Matt Charman and Ethan and Joel Coen add suspense to their fact-based story — the basic outcome of which is well known — by focusing on the fate of American graduate student Frederic Pryor (Will Rogers). A rather naive youth caught on the wrong side of the newly built Berlin Wall, and conveniently accused of spying by the East Germans, Pryor is anything but a priority as far as the real cloak-and-dagger folks backing Donovan are concerned.

Still, savvy gamesman Donovan is determined to spring Pryor as well as Powers — even if he has to risk walking away with neither of them to accomplish it.

The script maintains a balanced outlook on the ideological struggle, neither sugarcoating American behavior nor ignoring the brutality of the Communists. Together with the thoroughgoing, understated decency of its main character, this just portrayal of the past makes Spielberg’s predictably well-crafted retrospective a valuable viewing experience.

In fact, the lessons it conveys, and the ethics it upholds may lead many parents to regard “Bridge of Spies” as acceptable fare for their older teens, despite the potentially problematic material listed below.

The film contains a few uses of profanity, a couple of rough terms and occasional crude and crass language. The Catholic News Service classification is A-III — adults. The Motion Picture Association of America rating is PG-13 — parents strongly cautioned. Some material may be inappropriate for children under 13.

PREVIOUS: Like Halloween treats, ‘Goosebumps’ has frights of many kinds