Book’s academic style makes for a difficult but worthwhile read 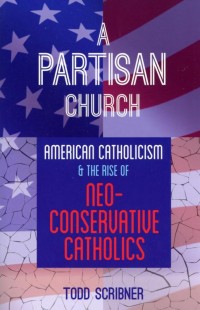 “A Partisan Church: American Catholicism and the Rise of Neo-Conservative Catholics”
by Todd Scribner.
The Catholic University of America Press (Washington, 2015).
286 pp, $34.95.

It appears from the preface, introduction and footnotes in “A Partisan Church” that Todd Scribner drew heavily from the dissertation — “The Neoconservative Catholic Thought During the Reagan Era, 1980-1988” — he wrote in earning a doctorate in philosophy from The Catholic University of America in 2011.

That is not a criticism, but it indicates the style in which it is written, as well as the tone and content of “A Partisan Church.” Scribner, an accomplished researcher and writer, serves as education outreach coordinator at the U.S. Conference of Catholic Bishops. His scholarship and experience alone qualify him to focus on this particular era in the U.S. church.

Readers accustomed to and comfortable with academic writing will welcome the depth with which Scribner explores and develops the topic. Using the words of Father Richard Neuhaus, Michael Novak and George Weigel, a group he terms “the first wave of neoconservative Catholics,” he examines the “disruptions that occurred in Catholic intellectual life” in the last 50 years of the 20th century.

Much of the text deals with how immersed clergy, including bishops, were in political matters following the Second Vatican Council. This was a time when two priests, both Democrats, served in the U.S. House of Representatives — Norbertine Father Robert Cornell (1975-1979) and Jesuit Father Robert Drinan (1973-1981). It also was the era when the U.S. bishops wrote and promulgated pastoral letters on nuclear arms and on the economy: “The Challenge of Peace: God’s Promise and Our Response” (1983) and “Economic Justice for All” (1986).

It is an understatement to say the bishops’ foray into those areas, and others they addressed during that time, was not welcome by neoconservative Catholics who saw that as territory reserved for Catholic laity, and who strongly supported President Ronald Reagan, a Republican.

All of that and its implications, as delineated by Scribner, are explored in great detail throughout “A Partisan Church.” Of particular interest is the chapter titled “When Shepherds Became Sheep” which, again relying heavily upon the work of Father Neuhaus, Novak and Weigel, and papers written by neoconservative groups, provides a broad historical context for what the bishops were doing.

This is not an easy read, but it is an important book in that it provides a view of a historical part of U.S. church life. Given the topic, readers familiar with that era may strongly disagree with Scribner’s thesis and his development of it. Or they may embrace it. In either case, they should appreciate and value what he presents.

Olszewski is the general manager of the Catholic Herald, a publication serving the Catholic community in southeastern Wisconsin.

PREVIOUS: Movie review: In the Heart of the Sea