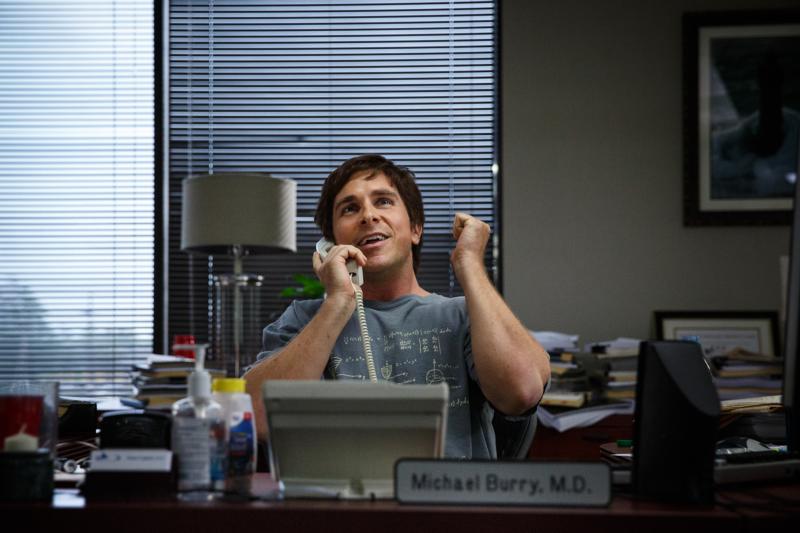 Christian Bale stars in a scene from the movie "The Big Short." The Catholic News Service classification is A-III -- adults. The Motion Picture Association of America rating is R -- restricted. Under 17 requires accompanying parent or adult guardian. (CNS photo/Paramount)

NEW YORK (CNS) — The run-up to the financial crisis that began in 2007 provides the backdrop for director and co-writer Adam McKay’s ensemble dramatization “The Big Short” (Paramount).

Based on the real events recounted in Michael Lewis’ 2010 book of the same name — subtitled “Inside the Doomsday Machine” — the film tells the story of a handful of disparate individuals who, unlike the vast majority of analysts, managed to foresee the coming collapse of America’s housing market.

Even as it merrily berates the greed and folly its heroes alone seemed able or willing to recognize at the time, McKay’s script, written with Charles Randolph, carefully reminds moviegoers of the human cost resulting from such widespread corruption. Some brushes with the seamy side of life and persistent machismo-driven swearing, however, may limit the film’s appeal — even among grownups.

At the center of the action stand two equally eccentric figures: socially awkward physician-turned-brilliant-money manager Michael Burry (Christian Bale) and cynical, ill-tempered fund administrator Mark Baum (Steve Carell). Unlike virtually everyone else on Wall Street, Burry methodically examines the actual numbers behind the mortgage boom and discovers that the housing industry had become a house of cards.

Learning of Burry’s findings, fast-talking banker Jared Vennett (Ryan Gosling) pitches them to Baum, who does some research of his own before reaching the same conclusion.

When small-scale investment partners Jamie Shipley (Finn Wittrock) and Charlie Geller (John Magaro) independently run across the pessimistic information Burry has uncovered, they too want to capitalize on it. But to do so, they’ll need to enlist the help of a friend: retired Wall Street powerhouse Ben Rickert (Brad Pitt). A rat-race dropout with apocalyptic notions of society’s looming downfall, Rickert has both the insider experience and the connections Shipley and Geller lack.

Despite virtually universal opposition from clients and colleagues, these six naysayers buck conventional wisdom, and bet everything on a real-estate downturn. After that, it’s a matter of holding fast to their convictions as those within the system manipulate matters to try to hold off the inevitable collapse.

Along with interesting characters acting under severe pressure, and a wealth of dramatic irony, McKay and Randolph offer audiences an amusing primer on the economic factors underlying the crash. To soften the abstract, eye-glazing nature of these lessons, they’re delivered by such unlikely instructors as actress Margot Robbie (who tutors us while sipping champagne in a bubble bath), Disney-bred star Selena Gomez and TV chef Anthony Bourdain.

Would-be crusader Baum’s outrage at the wheeler-dealer shenanigans he’s witnessing provides the movie with its moral foundation. That this same emotion makes a nice fit with a liberal political outlook goes without saying, though that point is handled with a reasonably light touch — at least until the picture’s hammer-wielding conclusion.

Before reaching that wrap-up, Hillary and Donald fans alike will have to deal with a couple of burlesque-themed interludes and a barrage of vulgarity that includes at least 70 F-bombs. So, while acceptable for mature audiences, “The Big Short” will certainly not be to every seasoned taste.

PREVIOUS: Vader to Vatican film critic: ‘I find your lack of faith disturbing’

NEXT: ‘Concussion’ reveals the traumatic risk of any given Sunday