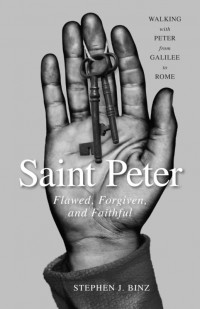 Travelers planning to visit the Holy Land may want to read Stephen Binz’s “Saint Peter: Flawed, Forgiven and Faithful.” In addition to his Scripture scholarship, Binz conducts study trips and pilgrimages to the places most closely linked with Jesus and his first disciples.

The author obviously loves bringing the Holy Land’s geography to life for readers. They travel with Peter in these pages from Galilee to Rome.

It is enjoyable to hear Binz talk about the home where Peter hosted Jesus or the small church at the place on the Sea of Galilee’s shores where Jesus cooked fish for his disciples after his resurrection.

The author seems particularly insightful in his advice about the right starting point for a Holy Land tour. Pilgrims “often begin their Holy Land tour with the cities of the Mediterranean coast,” he points out. But he prefers “to visit these coastal sites at the end of the trip because they are the places from which the Gospel was launched westward throughout the Roman Empire.”

He explains that “believers who left from this harbor to bring good news to the nations … knew that (Jesus) called them to cross boundaries and overcome barriers.”

This book is at its best in its attention to Peter’s crucial role in the ancient church’s decision to baptize Gentiles — to welcome even those who were not Jews and did not follow Jewish dietary practices into the community of faith and, as a consequence, to begin to take the Gospel to the ends of the earth.

While “the apostolic mission to all parts of the world will soon be led by Paul,” Peter’s admission of the Roman centurion Cornelius to baptism in the Acts of the Apostles “makes it clear that Peter was the inaugurator of this mission,” Binz says.

“Saint Peter” exhibits a religious educational intent at numerous points. By this I mean that the book is not meant only to highlight Holy Land events that occurred some 2,000 years ago but to clarify what these long-ago incidents imply now for the concrete lives of Christians.

Binz says the Gospel challenges Christians to become “open to what seems impossible” — like “walking on water, feeding thousands with a few loaves, rising from the dead, forgiving an enemy, giving precious time to prayer, giving away hard-earned money, standing alone for what is just.”

He comments, too, that “the call of the risen Christ for us to be his witnesses to the ends of the earth convinces us that now every place can be a holy land.”

“Saint Peter” is not a scholarly tome overloaded with footnotes or discussions of technical points. On the other hand, some other biblical scholars might quibble with a point or two here.

Binz does not appear to question the traditional view that the author of the Gospel of Mark is the John Mark who made an appearance in the Acts of the Apostles and went on to become a close associate of Peter. Thus, Gospel readers might well expect John Mark to introduce them in a highly significant way to Peter’s teaching.

“Although Mark had many sources for the material of his Gospel, Peter seems to be his most important and consistent source of information,” Binz writes. The New American Bible cautions, however, that “Petrine influence” in this Gospel should not “be exaggerated.”

What I think readers will enjoy most is the book’s description of Peter not as someone so perfect that they never could identify with him, but someone like them in important ways.

Binz explains that in the Gospels “we are shown the flaws in Peter’s character — the chips in the Rock.” However, “we are also shown, through praise and criticism of Peter throughout the Gospels, how God is working through the life of this great disciple.”

Jesus’ passion becomes a “point of crisis for Peter,” Binz comments. Peter insists to Jesus that “I will not deny you,” but Peter then denies Jesus three times.

“Peter’s bluster holds a lesson for all future disciples,” says Binz. “If we do not recognize our vulnerability, then we have set ourselves up for failure.” He suggests it is wise “to place our confidence in a power beyond our own.”

Peter will become known later for preaching the good news and for his healing ministry. Binz underscores the resemblances between the healing acts of Jesus and those of Peter.

In light of this, Binz writes, “Peter’s ministry demonstrates that Jesus is still powerfully at work in his church.”

PREVIOUS: Secrets abound in ‘Mother’s Day’ but pretentions are clear