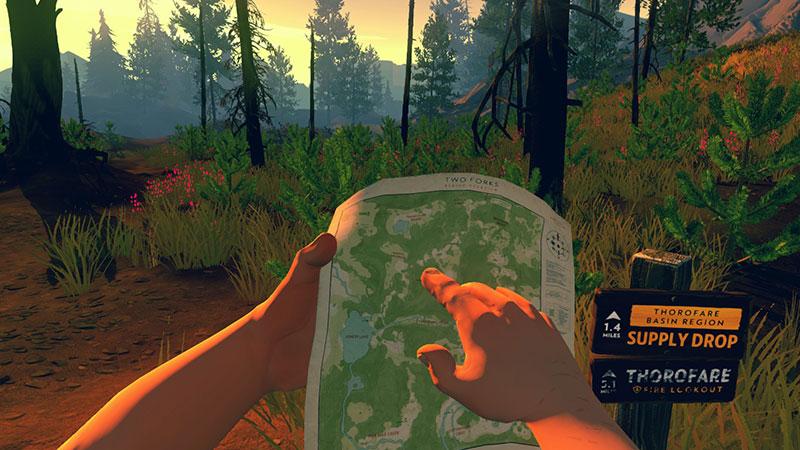 This is an image from the video game "Firewatch." The Catholic News Service classification is A-III -- adults. The Entertainment Software Rating Board rating is M -- mature. (CNS photo/Campo Santo)

NEW YORK (CNS) — If a designer were asked to come up with a video game that would effectively refute popular preconceptions about the genre, “Firewatch” (Campo Santo) might well be the result.

Playable on PC, Mac, Linux and the PlayStation 4, “Firewatch” goes for genuine emotion rather than mindless action, and evokes real mystery instead of confining itself to the simple formula of a shoot-’em-up.

The game is free of graphic violence. But there are adult themes concerning illness, including post-traumatic stress disorder. And the two main characters indulge in some vulgar talk.

Though not suitable for children, “Firewatch” can be a tremendously rewarding experience for their elders.

The action is set in 1989. The player takes on the persona of Henry, a fire lookout at a fictionalized version of Wyoming’s Shoshone National Park. With his marriage strained by his wife’s early-onset dementia — which develops into Alzheimer’s disease — a job in the wilderness offers Henry a means of escape.

Henry’s only contact is his fellow ranger Delilah, whose station is one a mountain over. Delilah, who communicates with Henry via a walkie-talkie, has a lot of personality and frequently dispenses sarcastic humor. But she also shows touches of warmth and tenderness. She nicknames Henry “Hank.”

As an average Joe trying to process grief — rather than a sniper, a car thief, or a dragon-slaying knight — Henry is the opposite of the usual video-game protagonist. He navigates his way through placid scenery by diligently following a map. No blasting through space or arrogantly roaring through an urban landscape in a hot rod for this leading character.

“Firewatch” takes place over the course of an entire summer, even if actual gameplay takes only about five hours to complete. Henry investigates a number of known and possible crimes. These include the use of illegal fireworks, the falling death of a hiker, and the disappearance of two teenage campers.

To reveal too much more of the terrific story could spoil it for potential players. But it can be said that the payoff is both unexpected and poignant.

The design of “Firewatch” is gorgeous.

The creators at Campo Santo, including illustrator Olly Moss, illuminate the screen with bold reds, yellows and oranges as they color the forest’s beautiful scenery. In keeping with the best tradition of fantasy settings, locales with names like Two Forks, Thunder Canyon and Jones Lake somehow appear more real than the actual places might.

The voice-over actors in “Firewatch” also deserve credit. Rich Sommer plays Henry with Everyman understatement. And Cissy Jones gives Delilah just the right amount of playful wit while leaving room for the intelligence and compassion that allow her friendship with Henry to grow.