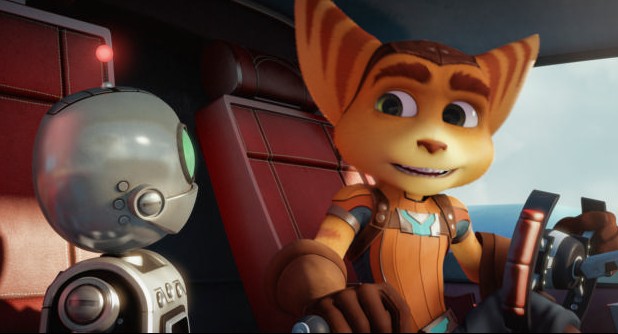 NEW YORK (CNS) — Busy 3-D visuals fail to mask the flat tone and by-the-numbers storytelling of the animated sci-fi adventure “Ratchet & Clank” (Gramercy). In fact, even undemanding youngsters may feel the space-time continuum yawning before them as the seemingly interminable 94 minutes of this video-game adaptation tick away.

There’s nothing particularly wrong with the film’s underlying message. As encapsulated in the repeated tagline, “You don’t have to do big things to be a hero; just the right ones,” it actually echoes — however faintly — Mother Teresa’s famous formula: “small things with great love.” But the vehicle used to convey this respectable theme bears more resemblance to a tired jalopy than a gleaming spaceship.

Thus there’s a strained quality to the attempts at humor with which the script — penned by co-director Kevin Munroe in collaboration with T.J. Fixman and Gerry Swallow — tries to make the predictable plot more involving. When your primary hero, the titular Ratchet (voice of James Arnold Taylor), is a catlike creature called a lombax whose very nature requires an explanatory detour, moreover, it doesn’t bode well for the journey ahead.

An accomplished, albeit somewhat scatterbrained, mechanic, Ratchet longs to leave the garage behind and join a glamorous band of interplanetary peacekeepers known as the Galactic Rangers. When he tries out for this prestigious team via an interview with their vain leader, Qwark (voice of Jim Ward), however, things go so badly wrong that Ratchet finds himself back among the spare parts being consoled by his gruff but kindly employer, Grimroth (voiced by John Goodman).

Yet plucky underdogs can’t be kept down forever. At least in the world of kids’ movies they can’t. So it’s not long before Ratchet teams with brainiac robot Clank (voice of David Kaye) to take on Drek (voice of Paul Giamatti), a planet-destroying villain who has temporarily managed to stymie the Rangers.

We know that the aptly named Drek must be about the blackest hat going since he’s not only a tycoon, but a polluting industrialist whose frequently seen factory spews soot into the air with merry abandon.

Joined at the helm by Jericca Cleland, Munroe adds moral observations about the dangers of pride and the need to be a team player to the aforementioned outline of everyday heroism. If their eyes haven’t glazed over, those are ethical signals parents and little ones alike can profitably take on board.

Momentary dangers and some loud mayhem, however, suggest that the very youngest moviegoers might better be steered in a different direction. All the more so if those supervising them have a low tolerance for tedium.

The film contains some cartoon violence, including explosions, and occasional peril. The Catholic News Service classification is A-I — general patronage. The Motion Picture Association of America rating is PG — parental guidance suggested. Some material may not be suitable for children.