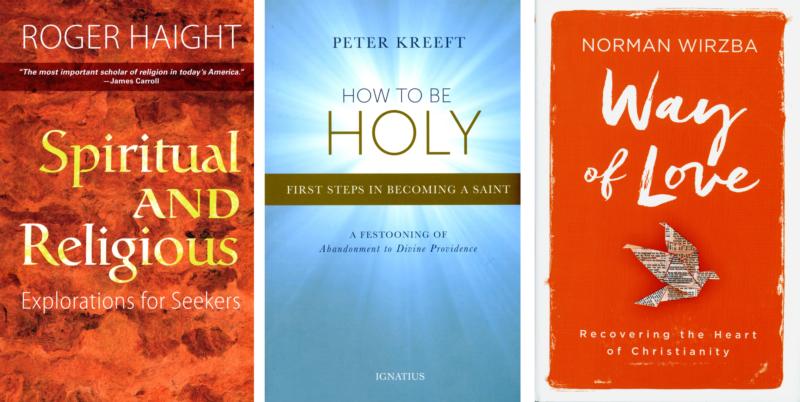 Spirituality. It’s a focus of interest for many these days, and not just those who announce themselves as “spiritual but not religious.”

These three books, from rather different perspectives and backgrounds, propose to help us navigate the challenging waters of understanding and exploring just what spirituality is and how to live it out.

Jesuit Father Roger Haight, a theologian and scholar, helps frame the conversation by clarifying the terms and setting the challenges before us. In “Spiritual and Religious” his formal definition of spirituality is “the logic, or character or consistent quality of a person’s or a group’s pattern of living insofar as it is measured before some ultimate reality.” A helpful definition, but it also highlights that his terminology and concepts at times may not be for a general audience.

He is, however, quite clear about the connection with religion: “Religions cannot exist without spirituality but are precisely the institutionalization of spirituality. Spirituality is prior to religion, and religion has as its purpose to reflect and support spirituality. When religion fails in this function, it loses its reason for being.” Father Haight is clear and honest and inviting in his approach, if a little abstract at times.

Peter Kreeft, a popular author, attempts to be brief and simple in his approach, but some readers may find his style to be rather flip and frustrating.

For example, after talking about God’s loving presence in the world, he says, “That is either true or it is not. If that is not true, then let us all become atheists, so that we can live in the real world and not in illusion and fantasy. If it is true, then let us become saints for exactly the same reason.”

Kreeft’s book, “How To Be Holy,” is not really for a beginner, even though that’s who he designed it for. (It begins with “Ten Reasons to Read This Book,” after he first explains that the cover of the book is a joke, since he’s certainly no saint nor expert on how to be holy.)

The concern of this reviewer is not what he says as much as how he says it, almost condescending at times and oversimplified. For example, he explains, “If the reason you bought this book was the title (‘holiness’), and if you seek that holiness in your heart, then you will certainly attain your desire. If not, Jesus is a fool or a liar.”

Norman Wirzba, professor of theology and ecology at Duke University Divinity School, brings a refreshingly different perspective to the topic of spirituality in at least a couple ways.

First, he mentions specific people who are trying to live out the qualities he is describing, such as a community garden manager in the mountains of North Carolina who experiences grace when she welcomes a vegetable thief to work in the garden alongside her. As Catholics we know through our tradition of saints that having someone to show us specifically what following Christ may mean in a variety of ways and in a variety of settings is so helpful.

He sets forth a strong theme early in the book: “Our way into the fullness of life is the way of love. That is the central claim of this book. Love is the power that enables us to affirm, even embrace, the wide range of life’s splendor and tragedy. It is the passion and that enables us to protect, nurture and celebrate every created thing. It is the lens that enables us to see each person and creature as a gift worthy to be cherished. Love is the eternal ‘yes’ to life’s possibilities and promise. It is the form of protest that says ‘no’ to all the forces in our world that diminish and degrade life.”

Wirzba then goes on to talk about how we live that out in four sections to his book: creation, fall, redemption and hope.

When he is talking about creation, his background in ecology comes through loud and clear. For example, “If you want to know the meaning of life — why it is, what it is for, and why it matters — and if you want see what God’s creating love actually looks like, one of the best places to go is to a garden.” But when he discusses fall and redemption, his strongly Protestant perspective comes through, emphasizing sin and guilt in a way that seems to shortchange the Resurrection, at least from a Catholic perspective.

Each of these authors give the reader plenty to consider in exploring the intriguing and many-faceted topic of spirituality.

Finley is the author of several books on practical spirituality, including “The Liturgy of Motherhood: Moments of Grace” and “Savoring God: Praying With All Our Senses,” and has just finished teaching in the religious studies department. at Gonzaga University.