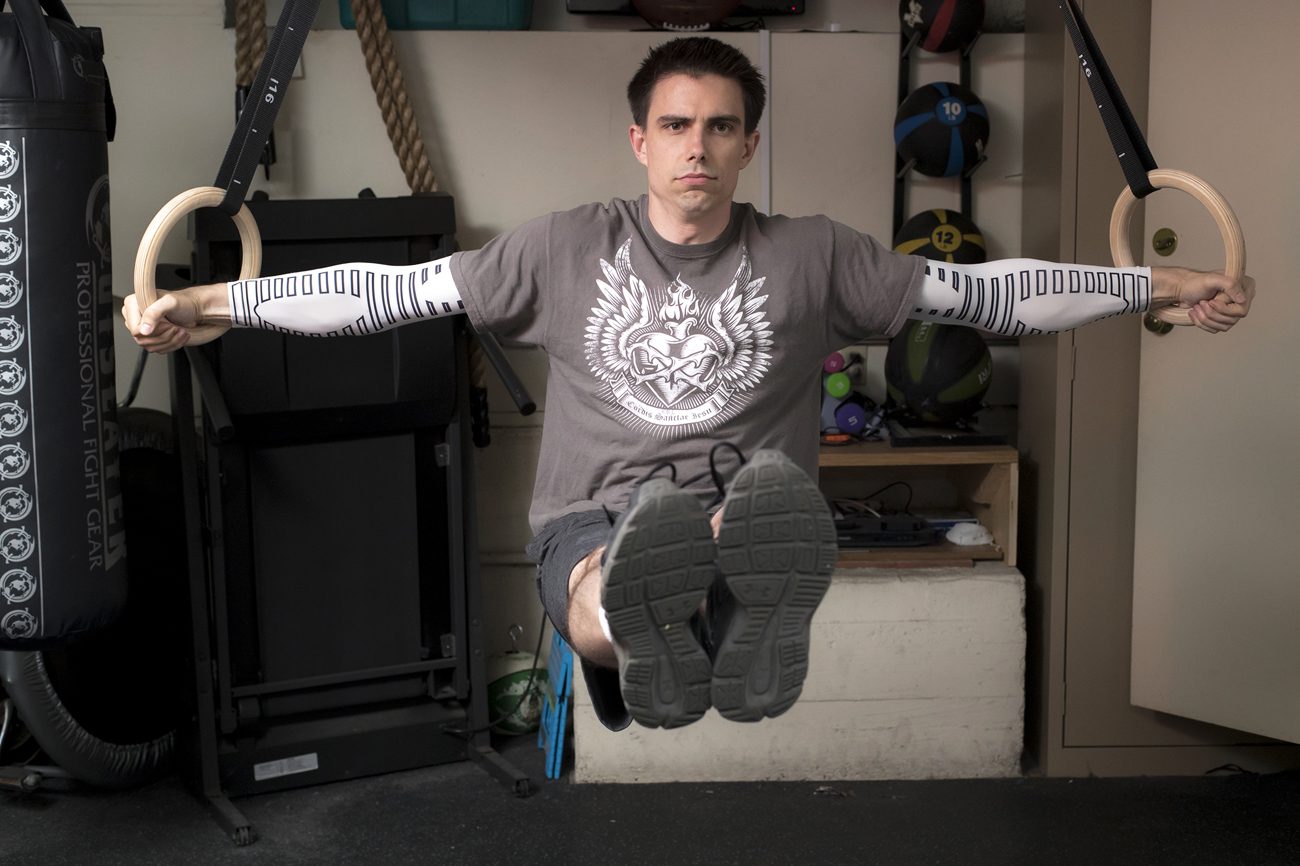 Sean Bryan, the "Papal Ninja," poses for a June 3 photo. Bryan competed in NBC's "American Ninja Warrior" and made it to the city finals in Los Angeles July 11. (CNS photo/Chris Silva, Catholic Voice)

OAKLAND, Calif. (CNS) — In what has become a staple of summer television, scores of athletic folks run an obstacle course that looks like a cross between a playground on steroids and the inner workings of a pinball machine.

They race against the clock; if they miss an obstacle, they fall ignominiously into water. In cities across the United States, about 100 carefully screened contestants give “American Ninja Warrior” their best shot, vying for a chance to reach the finals, which are held in Las Vegas, with a chance at an elusive $1 million payday.

Over the series’ eight summers, some regulars have developed followings, competing year after year. But this year, Sean Bryan — the “Papal Ninja” — was a newcomer. Spurred on by friends including a priest-friend — a friar — his performance qualified him for the city finals in Los Angeles July 11.

Although he fell and did not advance to semi-finals to be held in Atlanta, Bryan said in a Facebook post that he’ll be back next year. He also has been given plenty of credit for telling his story of faith in prime time.

In a brief video segment, he was shown in prayer and at play near his home and at his alma mater, the Dominican School of Philosophy and Theology in Berkeley.

“Faith is not something separated from society, and it should be integrated,” he told The Catholic Voice, newspaper of the Diocese of Oakland. “I certainly hope it (the video) cast a good light on the church, to some degree. I’m not going to expect it to change anyone’s life, but it could trigger a process. You never know.”

Beyond his notoriety for competing in “American Ninja Warrior” and climbing its famed warped wall, Bryan is one of the masters of ceremonies for the bishop of Oakland. The diocese is headed by Bishop Michael C. Barber.

At the request of Sacramento Bishop Jaime Soto, he also is working with Dominican Father Michael Sweeney and the Western Dominicans on a formation program for the Diocese of Sacramento to develop lay leadership in the church.

Bryan, 31, who had been discerning the priesthood with the Salesians, heard a call to something else.

“In the ‘Ninja’ community, there’s a running joke: Everybody’s biting their nails, waiting to get the call. It’s from an 818 number, down in Los Angeles area,” Bryan said.

Bryan, who graduated from the University of California in Berkeley in 2008, was a member of the university’s gymnastics team, but a shoulder injury and subsequent surgeries forced him to leave that level of gymnastics behind and he took up other sports, including biking.

But over the years he kept “getting encouraged to look into this ‘Ninja’ stuff.” He began watching the show three or four years ago, he said.

The road to being a contestant on “American Ninja Warrior,” it turned out, was a “long, rigorous process,” he said.

“I used that time as a reflection period in my life,” he said. “They ask some detailed questions about your background. They want to know your story. That’s what people really connect with.”

Bryan also connected with Apex Movement in Concord, which he called “a ‘pretty awesome ‘Ninja’ gym.” It features obstacles inspired by the competition.

“They have a lot of veterans on the show,” he said. “There’s so much wisdom, you have to pinch yourself.”

The application was 10 pages of writing. The video he had to submit about himself, he said, was another matter. Although he is comfortable behind the camera, he said he didn’t like being in front of it. “I tried to figure out a creative way of telling my story,” he explained.

A friend who is a director of photography interviewed people asking questions about Bryan, then laced those with images of Bryan doing acrobatics.

He said if you take out the conquering and violence aspects, a ninja is basically “a skilled person who helps to accomplish the mission of the one who sends them.”

“For myself, I’m being a sent by Christ, being sent by the church after every Mass, to go out and infiltrate the secular society in a way that helps order it to God,” he said.

Adopting the yellow and white papal colors as his ninja outfit did not guarantee automatic recognition in the world, however.

He was asked at one point, “Papal? You mean PayPal?”

As Bryan moved through the obstacle course in the show’s June 1 premiere, commentators were not at a loss for superlatives: “He’s looking divine,” at one point, and “Call the Vatican; the Papal Ninja is representing.”

When a contestant on “American Ninja Warrior” reaches the end of the course, he or she hits a button and a puff of white smoke is released in the air.

A little inside joke for the Papal Ninja, who followed that with a back flip.

Since his first appearance on the television show, he and the friends who were featured in the segment have been reconnecting.

Bryan’s story also has resonated with strangers on social media. “I’ve been getting some feedback on how my story has inspired them,” he said. “That’s definitely motivating me,” he said.

But when asked if he had heard from the pope, Bryan said he didn’t expect that.

He said it would be “energizing and motivating” and definitely a “once-in-a-lifetime moment,” but he also would keep it in check. “I would always remember, it’s nothing compared to the grace we receive in the sacraments,” he said.

PREVIOUS: ‘The Infiltrator’ follows the money trail of drug trafficking to bankers

NEXT: Authors approach topic of spirituality from differing perspectives