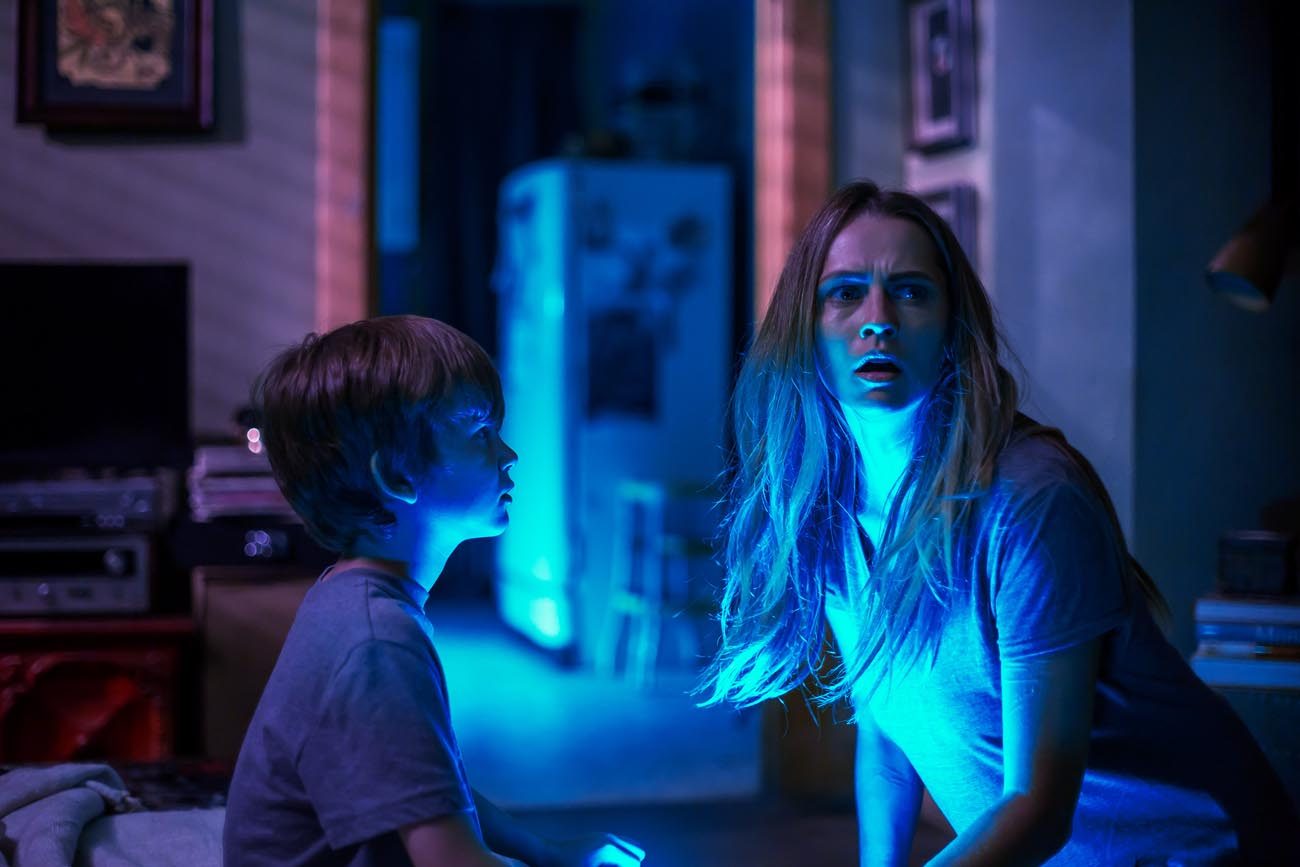 Gabriel Bateman and Teresa Palmer star in a scene from the movie "Lights Out." (CNS photo/Warner Bros.)

NEW YORK (CNS) — Viewers may find themselves giggling at “Lights Out” (Warner Bros). But it won’t be because this feeble horror film has scared them silly.

Young Martin (Gabriel Bateman) has a better reason than most 10-year-olds for not being able to get to sleep. His demented mother, Sophie (Maria Bello), is camped out nightly in her dark bedroom with her best friend, a feral creature named Diana (Alicia Vela-Bailey). Zombielike Diana is repelled by light, which is why Martin sleeps with a flashlight.

The backstory reveals that Sophie and Diana met as children, when both were committed to a mental institution. Diana contracted a rare skin disease which rendered her hideous and, ultimately, invisible. It was also fatal — or so the doctors thought.

Fast forward 20 years, and Sophie is twice married, off her meds, and acting very strangely when the sun goes down.

As the body count starts to rise in the dead of night, Sophie’s estranged daughter, Rebecca (Teresa Palmer), enters the picture. She left home years ago to escape Mommie Dearest (sorry, wrong movie), but is now determined — with the aid of her lovesick boyfriend Bret (Alexander DiPersia) — to rescue her brother.

At a brisk 81 minutes, “Lights Out” doesn’t unduly tax viewers’ patience. Unfortunately, the film’s ending is not only unexpected and shocking, it’s also morally unacceptable.

Were the context any less remote from real life, the movie would have to be considered unsuitable for all. As it is, the otherworldly situation within which the climactic misdeed is committed diminishes its likely influence, meaning that at least a few well-grounded grownups may choose to witness it.

The film contains occasional bloody violence and scary imagery, a suicide, implied nonmarital sexual activity, drug use and some crude language. The Catholic News Service classification is L — limited adult audience, films whose problematic content many adults would find troubling. The Motion Picture Association of America rating is PG-13 — parents strongly cautioned. Some material may be inappropriate for children under 13.

NEXT: ‘Star Trek Beyond’ goes where none of its forebears have gone