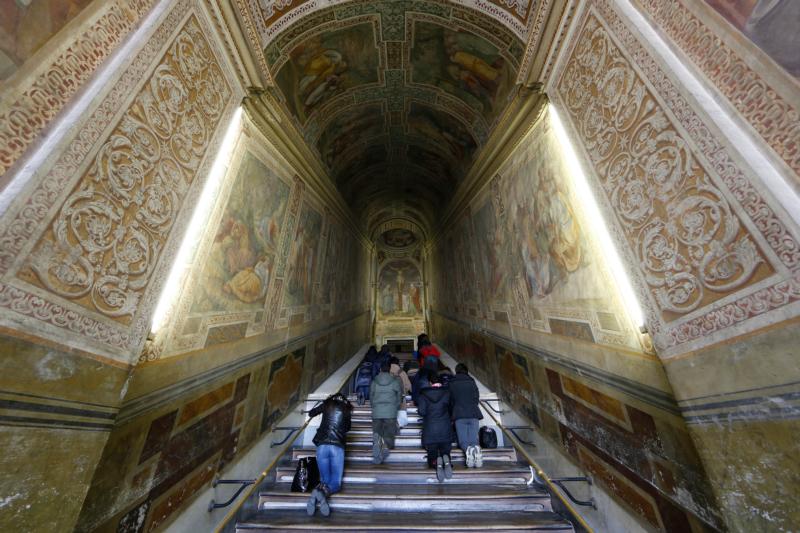 People walk on their knees as they pray at the Holy Stairs in Rome March 10, 2014. The Holy Stairs, or Scala Santa, are seen in the 3-D documentary "St. Peter's and the Papal Basilicas of Rome." (CNS photo/Paul Haring)

NEW YORK (CNS) — The 3-D documentary “St. Peter’s and the Papal Basilicas of Rome” had only a single American showing July 14 in a few hundred theaters.

But viewers are likely to get another opportunity to catch up with the film. Fathom Events, its American distributor, tends to offer encore showings of its opera and theater productions. So the big-screen tour should return in a few months, although no date has been announced.

While the movie has its strengths, the overall project doesn’t quite live up to its hype. On the plus side, this 90-minute look at the Eternal City’s “major” or papal basilicas — St. Peter’s, St. John Lateran, St. Mary Major and St. Paul’s Outside the Walls — utilizes some splendid aerial photography. And who doesn’t enjoy a top-down view of a magnificent dome?

But the filmmakers rely too heavily on art historians as talking heads, and something about the English translation of the Italian adds a layer of distance. Besides which, these experts talk a lot, giving the venture the feel of a school assignment.

The featured structures also tend to be shown empty. Amid the many leisurely pans across gilded ceilings and chipped mosaics, there’s a noticeable absence of people within camera range. The result is an air of lifelessness and abstraction.

Brief footage of Pope Francis dramatically opening the Holy Door at St. Peter’s to inaugurate the Jubilee Year of Mercy is included, however.

So, too, are images of pilgrims ascending the 28 marble steps of the Scala Santa, or Holy Stairs, adjacent to St. John Lateran. Since this is traditionally believed to be the staircase that led up to the residence of Pontius Pilate, the site of Jesus’ condemnation, the devout climb these steps on their knees as an act of penance.

With these fleeting exceptions, though, the film’s focus is not on the role these churches play as active houses of worship. Instead they’re primarily considered as architectural masterpieces filled with great art.

St. Peter’s, of course, is the star, and the big-screen presentation does effectively capture its vast, majestic dimensions. On the other end of the spectrum, there are also a few memorable close-ups, including shots of the ancient graffiti left by pilgrims to St. Peter’s tomb and a lingering look at Michelangelo’s signature on the Pieta.

That latter detail is one in-person visitors to Rome would need binoculars to appreciate. Since a damaging 1972 attack on the cherished statue, a bullet-proof glass screen has separated it from the public.

Perhaps that’s as good an indication as any of the real value of this documentary. Moviegoers are treated to a privileged, if slow-moving, visit to all four of these impressive sites within the span of an hour-and-a-half — and without having to dodge the notorious Roman traffic.

“St. Peter’s and the Papal Basilicas of Rome” was produced by the Vatican television center, CTV, and Sky 3D in collaboration with the Italian government’s culture ministry. It was shown as the last in a series called “Art & Architecture in Cinema.” Earlier films in the series showcased works by Goya, Leonardo Da Vinci and Renoir and profiled landmarks like Florence’s Uffizi Gallery and Milan’s Teatro alla Scala.

NEXT: Movie review: Lights Out