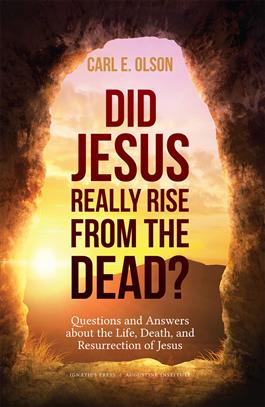 “Did Jesus Really Rise From the Dead? Questions and Answers About the Life, Death and Resurrection of Jesus”
by Carl E. Olson.
Augustine Institute (Greenwood Village, Colorado, 2016).
201 pp., $14.95.

Although Carl E. Olson states that “Did Jesus Really Rise From the Dead?” is not an academic book, he delves into and disputes the conclusions and presumptions of numerous academic and popular books which in one way or another seek to question or even deny the historical reality of Jesus’ resurrection.

Olson uses a question-and-answer format, with the questioner representing a skeptical view rejecting the Resurrection on various grounds, reflecting views ranging from the 18th-century Enlightenment to humanism and contemporary secularism. He demonstrates the development of modern biblical scholarship from its roots in the Enlightenment to the present. He answers each question he raises and, not surprisingly, concludes that the overall view of modern historical scholarship has to accept the historical reality of the Resurrection, since the subsequent rise and spread of Christianity is inexplicable without it.

Olson establishes the essential historical reliability of the writings of St. Paul and the Gospels, since these relied on eyewitness accounts of the risen Jesus preserved in oral tradition for no more than a generation or two. He emphasizes, rightly, that the Resurrection was bodily, that is physical, and not just spiritual.

Here, he rejects ancient and modern gnostic approaches, which view the physical as “lesser” or indeed as “evil” as opposed to the “superior” goodness of the spiritual. He is correct in emphasizing this point since the doctrine of the Incarnation is, in fact, what makes Christianity a distinct religion. The Incarnation is the dividing line between Judaism and Christianity.

Contrary to some of Olson’s overstatements, Judaism did not and does not have a fundamental issue with the idea of the bodily resurrection of Jesus, since Pharisaic and modern rabbinic Judaism believes in an “end time,” a messianic age in which the dead will be raised by God and face judgment by God.

The messiah will usher in an age of universal peace, harmony and justice for all humanity, so Jews speak of the coming of the messiah since, as they note, such an age of universal peace has not yet arrived. Christians speak of the return of the Messiah. In the meantime, as various Vatican and joint Catholic-Jewish documents have noted, Jews and Christians are called to work together to prepare the way, by caring for the poor and sick and establishing societies of equal law and justice for all.

Olson debunks contemporary ideas that the Resurrection was a collective hallucination of early Christians or a myth in the negative sense. Catholic readers who have confronted these questions or wish to delve into them will appreciate this book.

They would be well served, however, to be a bit reserved about the author’s negative view of the Pharisees, who were the lay reform movement of the time and not really included in the Jewish leadership of Jesus’ time. That role was reserved for the chief priests and the Sadducees, who were quislings supporting and supported by the Romans, with the chief priest, Caiaphas, in fact, appointed by his boss, Pontius Pilate.

Fisher is distinguished professor of theology at St. Leo University in Florida.

NEXT: Collection on mercy has much to say about often-misunderstood virtue