Memoir on path to Catholicism could inspire many 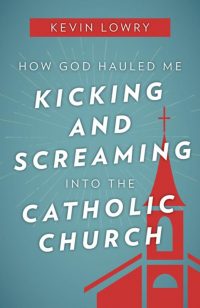 Over the decades, indeed over the centuries, a good many new Catholics wrote down accounts of their conversions. Going back as far as the fifth century and St. Augustine’s “Confessions,” such first-person accounts make good reading down to the present day. “Cradle Catholics” tend to be intrigued by these accounts, sometimes because they help overcome a tendency to take one’s Catholicism for granted, other times because they nourish a new appreciation for being Catholic.

Of course, those considering becoming Catholic also may find such books intriguing and helpful as they follow their own path to possible union with the Catholic Church. Alternatively, sometimes ex- or inactive Catholics may find a light to help guide them back to the Catholic faith.

Kevin Lowry’s book is unique in that it is a 21st-century account by a nontheologian written for regular folks. While every story is unique, Lowry’s is captivating because he grew up the son of a Presbyterian minister who had no intention of ever being anything else.

The book is divided into two parts. The first, “Sprinting to the Starting Gate — or How God Hauled Me Kicking and Screaming Into the Catholic Church Despite My Best Efforts to Avoid It,” follows Lowry from his early years up through his actual admission into the Catholic Church. These years include his first failed attempt at a college education as a Protestant at Franciscan University in Steubenville, Ohio, his marriage and his eventual baptism as a Catholic.

The second part is titled “Turning Stumbling Blocks into Stepping Stones — or How All Those Weird Things About Catholicism Turn Out to Make Sense and Actually Bring You Closer to God.” Potential new Catholics may find this part of the book particularly interesting as Lowry addresses how he dealt with several aspects of Catholicism that prospective converts often find difficult to accept. These include the Eucharist, the sacrament of confession, devotion to Mary, church authorities and the church’s imperfections.

Lowry discusses each “stumbling block” fairly, clearly and with adequate theological competence. One issue he does not address, however, under the topic of “authority,” is this: Not infrequently, in our time intellectuals who become Catholic tend to replace Protestant biblical fundamentalism with Catholic doctrinal fundamentalism. Thus, for example, Lowry is the kind of Catholic who tends to believe that practically all official church teachings are at least quasi-infallible.

Be that as it may, however, most readers will find in this book a captivating and inspiring story to read and share with others.

Finley is the author of more than 30 books on Catholic themes, including “What Faith is Not” and “The Rosary Handbook: A Guide for Newcomers, Old-Timers, and Those in Between.”

PREVIOUS: ‘Denial’ honors the memory of the Holocaust by debunking its deniers

NEXT: For its tedium, ‘Inferno’ is more akin to movie purgatory