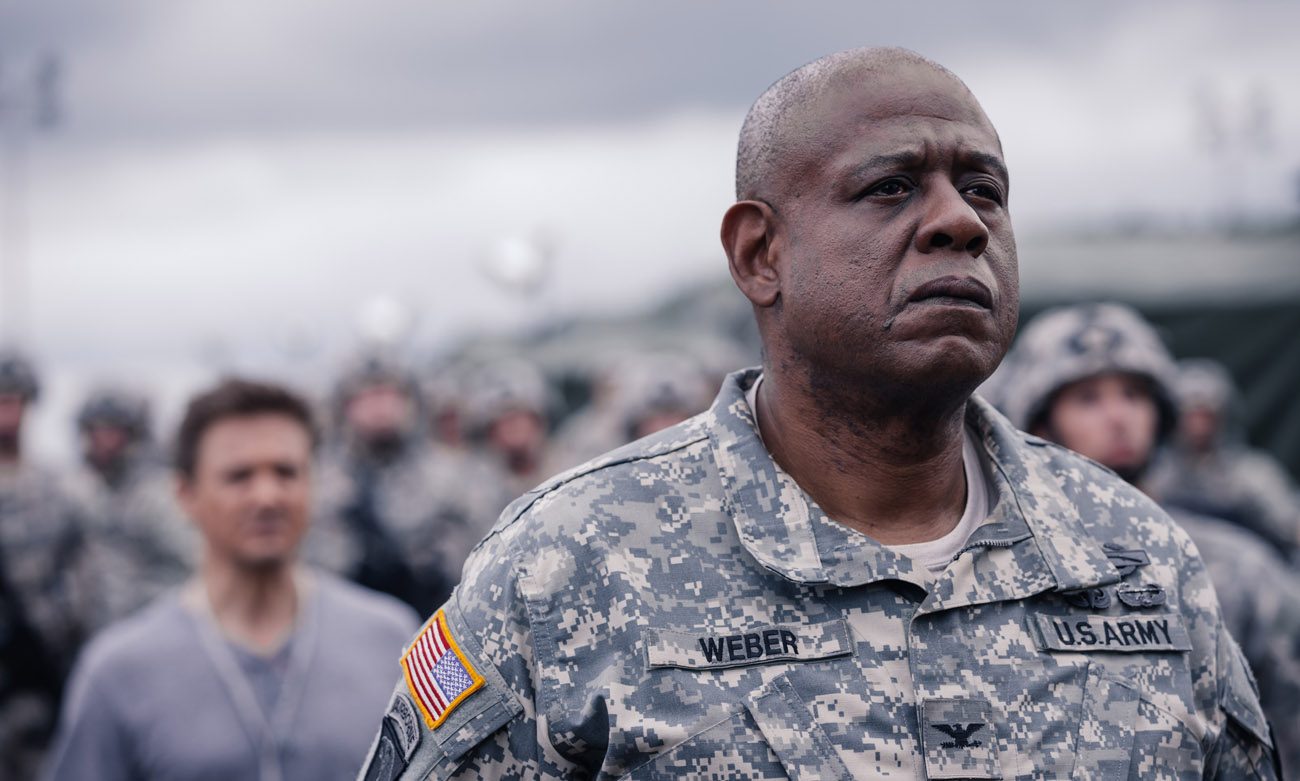 Forest Whitaker stars in a scene from the movie "Arrival." (CNS photo/Paramount Pictures)

NEW YORK (CNS) — Mankind has an extended encounter with aliens from outer space in “Arrival” (Paramount).

This unusually intimate science-fiction drama finds profundity on a human scale as well as in the cosmos. Hypnotic and melancholy, the trenchant film probes the human capacity for awe and the benefits of being vulnerable and brave at the same time.

Based on a Ted Chiang short story titled “Story of Your Life,” “Arrival” is both vividly realistic and mesmerizingly dreamlike. At its center is Dr. Louise Banks (Amy Adams), a linguist mourning a personal loss, who is enlisted to communicate with extraterrestrials that have descended upon Earth in a dozen ovoid spacecraft.

One of these charcoal-hued vessels hovers above a Montana field and the U.S. government, represented by Col. Weber (Forest Whitaker) of Military Intelligence, enlists Banks and a physicist named Ian Donnelly (Jeremy Renner) to determine what its occupants want and, most urgently, whether they pose an existential threat to mankind.

Step one is to find a means of communication and somehow decipher their language — either the sounds they make or, more probably, the symbols they produce. Basically it’s a code-breaking exercise, albeit one that requires Banks and Donnelly to enter the spaceship and come face-to-face with their potential interlocutors.

Although we’re only privy to the American efforts, experts from the 11 other countries where the ships have alighted attempt similar projects. Not surprisingly, the advent of the otherworldly visitors has triggered panic and significant geopolitical instability. Eventually, several nations led by China abandon the slow process of establishing meaningful contact and, fearing annihilation, threaten to attack the aliens pre-emptively.

Interlaced throughout the film are snippets of Banks’ personal life — ethereal flashbacks to moments when she’s conversing with her young daughter.

These transfixing scenes evoke the recent films of director Terrence Malick, especially “The Tree of Life.” And because they ultimately dovetail with Banks’ interaction with the aliens on both a material and metaphysical plane, they give “Arrival” a pronounced mystical quality.

Revealing anything more about the plot or the aliens could spoil viewing. But the film deploys elements commonly found in science-fiction tales in a novel and ultimately uplifting — if decidedly somber — way.

Director Denis Villeneuve and his cohort of designers and craftsmen do a splendid job of generating an alternately frazzled and eerily calm atmosphere. Without diminishing any of their technical, behind-the-scenes work however, Amy Adams’ performance leaves the most lasting impression.

Tough, tender and intelligent, she translates the dramatic cadences of the story in gripping fashion and will surely win accolades, including, quite possibly, her first Oscar after five previous nominations.

It’s difficult to assess whether the science underlying the narrative holds water or makes complete sense from a logical point of view. What’s clear is that the film coheres artistically and emotionally.

The same can be said about whether the science meshes with Christianity and Catholic thought. Certain aspects, particularly with regard to the concept of time, seem to conflict with a theological understanding of the universe. Yet in vital respects the values evinced by “Arrival” are consonant with a Catholic worldview.

Specifically, the movie proffers a message about the necessity of accepting pain and sorrow in order to enter a more enlightened state of being. And it highlights the wisdom of not succumbing to fear by letting our bellicose instincts override our capacity for open communication and acceptance.

As a bonus, there’s no sexuality or violence — and only one lapse into vulgar language — in “Arrival.” Accordingly, most parents will probably consider this fundamentally moral work acceptable for mature adolescents.

The film contains some potentially frightening scenes and a single instance of rough language. The Catholic News Service classification is A-III — adults. The Motion Picture Association of America rating is PG-13 – parents strongly cautioned. Some material may be inappropriate for children under 13.

NEXT: ‘Almost Christmas’ is almost a classic, but not quite