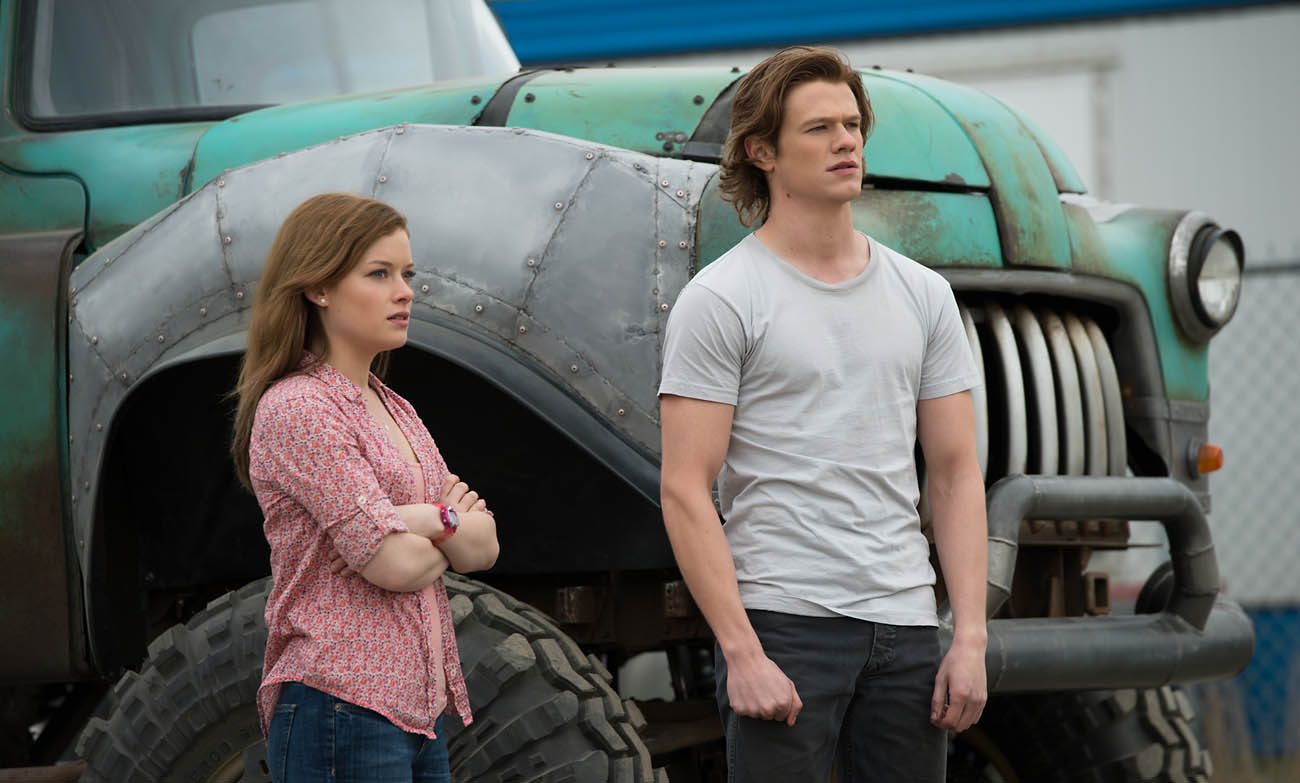 Jane Levy and Lucas Till star in a scene from the movie "Monster Trucks."(CNS photo/Paramount)

NEW YORK (CNS) — The action comedy “Monster Trucks” (Paramount) certainly lives up to its title. It has strange creatures mysteriously propelling utilitarian vehicles in the absence of an internal combustion engine. It also sees to it that some bad guys meet justice, as you might expect.

Complex thinking is not what director Chris Wedge’s children’s film demands. Undoubtedly best appreciated by those who still pronounce the eponymous conveyances “twuks,” it does manage to fold in an environmental message as rigs of every sort speed around the oil fields of North Dakota.

As for the monsters, for most of the picture there’s just one, a youngster named Creech. He’s more or less a combination of shark, octopus and manatee. He’s friendly and quite intelligent, along the lines of SpongeBob SquarePants. Instead of a pineapple under the sea, however, Creech’s native habitat is found in a dense aquifer.

His preferred food is crude oil, and he can somehow comprehend human speech — otherwise there’d be no story here.

Tripp (Lucas Till), a high school senior, wants nothing more than the independence that will come with his own set of wheels. So he’s been restoring an old pickup truck at the salvage yard where he works. Meanwhile, Terrafex, a profit-focused oil-drilling outfit, has tapped into a nearby aquifer without caring to discover whether its depths are home to any life forms.

There are, of course, and a few creatures explode out of the drilling machinery along with the water. Creech, looking for oil, finds his way to Tripp’s garage and crawls under the hood. Creech’s tentacles can wrap around the axles and — although the movie doesn’t have the budget to explain this well — some physiological property allows him to spin them.

Tripp and his tentative girlfriend Meredith (Jane Levy) team up after that for a series of antics, mainly devoted either to crushing other vehicles or to tormenting the drillers. All of these adversaries turn out to be irredeemable except for Jim (Thomas Lennon), a scientist with a conscience.

The many action sequences are unburdened by the logic of consequences. But trucks are merrily racing around, so the target viewers are unlikely to mind.

The film contains a few intense action sequences and a slightly crass sight gag. The Catholic News Service classification is A-I — general patronage. The Motion Picture Association of America rating is PG — parental guidance suggested. Some material may not be suitable for children.

NEXT: Actor did St. Ignatius’ spiritual exercises to prepare for priest role