Late exorcist’s words lift the veil on the demonic, Satan 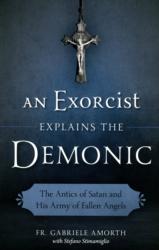 “An Exorcist Explains the Demonic: The Antics of Satan and His Army of Fallen Angels”
by Father Gabriele Amorth with Stefano Stimamiglio.
Sophia Institute Press (Manchester, New Hampshire, 2016).
145 pp., $14.95.

The world-renowned exorcist, Pauline Father Gabriele Amorth, who died this past September, has left his wisdom and experience in dealing with evil forces through this lucid and insightful compendium gleaned from interviews published in Credere magazine over the past few years.

Father Amorth founded the International Association of Exorcists and performed tens of thousands of exorcisms in his life. He is refreshingly direct throughout the book and doesn’t mince words when it comes to the reality of the demonic, evil spirits and Satan.

In addition, his writing conveys a sense of comfort and hope for those suffering from physical and spiritual ailments such as possession, vexation, obsession and infestation, all believed to stem from demonic forces.

Father Amorth attributes the rise on demonic activity to the decline in faith in God. “When faith in God declines, idolatry and irrationality increase; man must then look elsewhere for answers to his meaningful questions,” he writes. The principle of total and complete liberty apart from God and the denial of truth itself are indeed seductive in appearance but ultimately fail to satisfy the “desires of the human heart.”

Young people in particular, he states, “are easily deluded and are attracted to these ‘seductions’ which has been the desire of Satan since the beginning.” Extreme danger arises when these demonic spirits are invited into a person’s life and Father Amorth goes into detail on specific cases he has personally encountered.

However, there are an incredible amount of people who declare their allegiance to Satan, the “father of lies.” The casting of spells and “infestations of the demonic” are in fact a reality and chronicled in this book.

In chapter three, “The Cult of Satan and Its Manifestations,” topics such as spiritism, Satanism, occultism, wizards, fortunetellers, magic, piercings, tattoos and satanic music are addressed.

He states that the three rules of Satanism are: “You may do all you wish, no one has the right to command you, and you are the god of yourself.” One doesn’t need to be exposed to the satanic heavy metal band Slayer to see those three elements alive and operating in our culture.

Although “An Exorcist Explains the Demonic” is profoundly disquieting, Father Amorth reminds readers of God’s victory over Satan and the tools for growing in holiness and fighting evil provided by the church in the sacraments, sacramentals and prayer. God loves us as a father and desires to protect us.

The reader will perhaps be surprised by the amount of demonic activity that Father Amorth records in a matter-of-fact manner and yet always with the confidence that God is stronger. He recalls invoking with much success Mary, the mother of Jesus.

Father Amorth also was the exorcist for the Diocese of Rome during St. John Paul II’s pontificate so he has firsthand knowledge of at least three exorcisms that the pontiff performed in his private chapel. The demons are recorded as having a special indignation when his memory is invoked because St. John Paul “ruined their plans.” Father Amorth believes the reason for this is linked to Fatima and to the consecration of the world to the Immaculate Heart of Mary by St. John Paul March 25, 1984.

The book also relies on Scripture and the Catechism of the Catholic Church for insights into heaven, hell, purgatory and the rite of exorcism itself. Father Amorth makes a solid case for the need for many more exorcists and even suggests that every seminarian be exposed to the work of exorcism as an essential course of study.

This compendium is a suitable witness to both the man and his struggle with evil.

Wright is an author and academic dean of evangelization for the Diocese of Paterson and resides in New Jersey.

NEXT: Movie review: Get Out