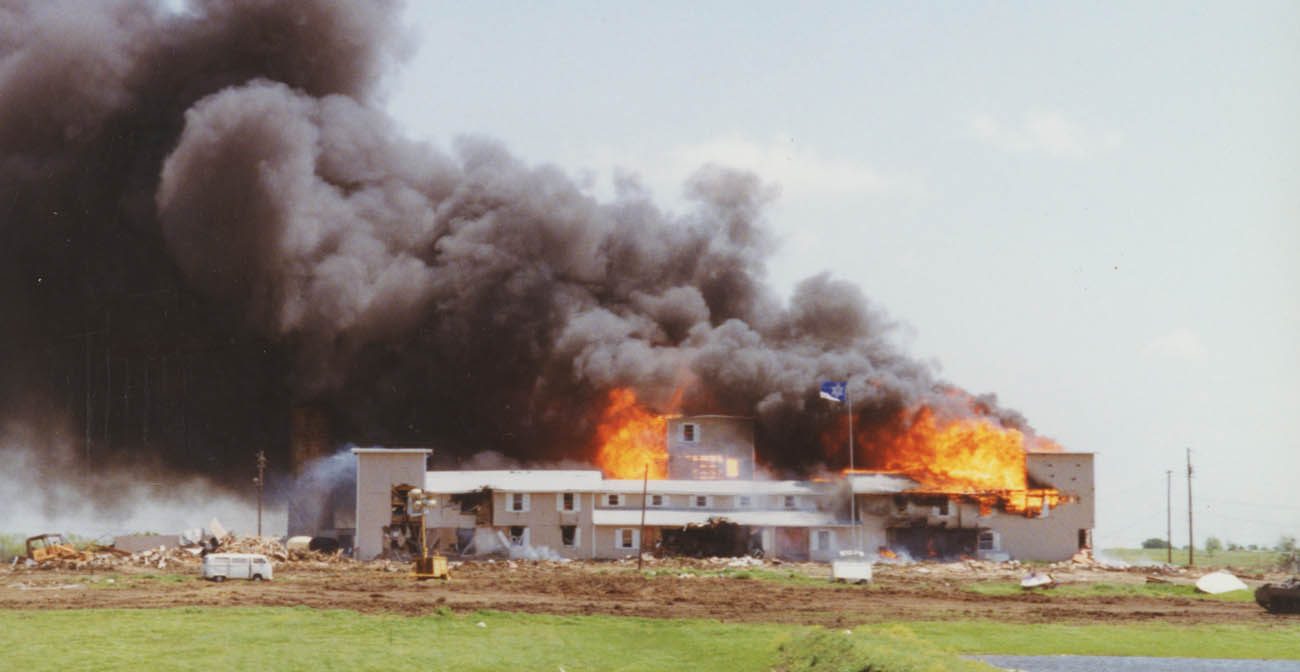 This is a scene from the PBS documentary "Oklahoma City," which debuted Feb. 7. The "American Experience" series explores the tragic bombing of the Alfred P. Murrah Federal Building in the eponymous state capital April 19, 1995. (CNS photo/PBS)

The attack is examined from the perspectives of survivors, first responders, law enforcement personnel, journalists and perpetrators.

Other than one use of a vulgarity, the film doesn’t contain any offensive material. But it does include distressing, yet necessary images of badly injured people. Among the mature themes it discusses are violence, hate groups and domestic terrorism. “Oklahoma City” is thus unsuitable fare for young children.

As the film opens, prosaic chatter at a meeting of the local Water Resources Board is suddenly cut short, at 9:02 a.m., as an explosion shreds the nine-story building in two, killing 168 people, including 19 children at a day care center, and injuring 675 others.

Timothy McVeigh built and detonated the bomb, which contained 6,500 pounds of explosives. His motive: to avenge the overly aggressive tactics he believed the FBI and the federal Bureau of Alcohol, Tobacco, Firearms and Explosives, or ATF, had used during their raid on the Branch Davidian compound in Waco, Texas. That event, which took place two years to the day before McVeigh’s attack, resulted in the deaths of 80 religious cultists.

FBI agent Jon Hersley asks “Oklahoma City’s” fundamental question. “Why would someone get so angry and upset they would do something like this?” We should view McVeigh’s actions, Goodman argues persuasively, in the context of the radical right, white separatist, anti-government faction of the 1980s and ’90s.

Goodman describes this movement as growing in intensity over those years from spark to flame to inferno, its mounting fervor leading ineluctably to McVeigh’s bombing.

Along with Waco, what happened to white separatist Randy Weaver and his family at Ruby Ridge, Idaho, in 1992 also sparked McVeigh’s action. When Weaver failed to appear in court to answer a charge he sold sawed-off shotguns to an ATF agent, U.S. Marshals and FBI agents, after surveilling the cabin where Weaver was holed up for more than a year, shot and killed his wife, Vicki, and 14-year-old son, Sammy.

Tanks, jeeps, and armored personnel vehicles supported government agents in their assault on the Weavers. As FBI agent Jim Botting acknowledges in the film, the government’s show of force was “overwhelming.” Ruby Ridge, writer Mark Potok says, “lit up the radical right.”

The movement’s anger continued to ratchet up during the government’s 51-day standoff with the Branch Davidians. They were led by David Koresh, who believed God had chosen him to prepare his followers for the coming of Armageddon.

Tipped off the cultists were making illegal, explosive weapons, the ATF decided to raid their compound. But the Davidians were prepared and, after a two-and-a-half-hour gunfight, 10 people were dead.

The protracted siege that followed drew far-right activists incensed about the government’s overreach to the site, McVeigh among them. On April 19, unable to negotiate the successful release of Davidians, FBI tanks rammed the compound’s main building as agents sprayed tear gas into it, and the Davidians set fire to it as well.

“What happened served his (Koresh’s) purpose,” said FBI agent Jeff Jamar, who had been at the scene. “I served his purpose to a terrible degree.”

The filmmakers commendably implicate the government for its violent excesses, which enraged McVeigh. For him, the Waco tragedy exemplified a government “at war with the American people.”

McVeigh had earlier become disillusioned during his Army service in the Gulf War. Someone who didn’t like bullies, McVeigh came to see the United States, through its involvement in Iraq, as playing exactly that role.

The November 1993 passage of the Brady Bill, which limited the use of handguns in the United States, finally pushed McVeigh to plot to take down a government building. He chose his eventual target because it housed ATF agents. McVeigh wanted to “hurt them where they hurt most.”

McVeigh insisted the government didn’t win when they sentenced him to death: “168 to 1,” he said.

Culling through an astonishing range of archival videos, and weaving multiple plotlines, themes, and perspectives, “Oklahoma City” strikingly evokes the biggest act of domestic terrorism in U.S. history. And, with the alt-right wielding more influence than ever before, the documentary’s lessons about extremist ideologies could hardly be timelier.

NEXT: Late exorcist’s words lift the veil on the demonic, Satan