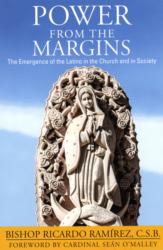 “Power From the Margins: The Emergence of the Latino in the Church and in Society”
by Bishop Ricardo Ramirez.
Orbis Books (Maryknoll, New York, 2016).
202 pp. $24.

Anyone looking for a primer on the Mexican-American (and by extension, the Latino) experience in the United States should read “Power From the Margins.” The author, retired Bishop Ricardo Ramirez, of Las Cruces, New Mexico, was born of Mexican parents in Bay City, Texas, along the Mexican border.

Bishop Ramirez blends his personal experiences as a Mexican-American with his pastor’s knowledge of how Latinos have been and are contributing to U.S. secular and Catholic society. He also dissects how they think, act and survive in a secular atmosphere and church culture often alien to their understandings of society and religion.

The book grapples with the thorny issues of immigration, regarding both legal immigrants and unauthorized immigrants, as well as education, youth formation, political activism and encouraging voting. But it was written before the political catapulting of Donald Trump as the Republican presidential nominee and then his election as president.

So it doesn’t deal with Trump’s inflammatory, xenophobic and fear-mongering rhetoric against Mexicans and Latinos; nor does the bishop talk about the Trump administration’s early actions to strictly enforce immigration laws, allowing federal authorities to more aggressively detain unauthorized immigrants, especially those with criminal records. Hopefully, an updated version will include his insights into these issues.

Through a series of essays, though, Bishop Ramirez traces the difficult emergence of Mexican-Americans in the U.S. Catholic Church and society, their growing political and economic influence, and their effort to gain a foothold in national life. Relying on his own experiences, the bishop narrates the discrimination and second-class status faced by his generation, even the vast majority such as himself who were U.S. citizens.

He tells how, when he was a boy, Mexican-Americans were not allowed to join the Bay City English-speaking parish, but had to use an abandoned railway car for their church.

Poignant is his discussion of how as a Mexican-American he had one foot in each culture, yet was not fully accepted as an American by Americans nor as a Mexican by Mexicans. He lived in Mexico as a seminarian and later has a missionary priest. “This made me feel like a ping-pong ball,” he relates. But it also led him to appreciate his Mexican-American heritage and its rich history which allows the duality of Mexican-Americans to meld aspects of two cultures. He should have developed this more.

There is also development of the importance of family life as a religious experience. In the Latino culture belief is often passed on by parents and grandparents more than by the clergy. It is a culture where the extended family is an integral part of faith activities.

The best part of the book, perhaps, is his discussion of popular religiosity and the importance of this in Latino religious life and worship: pilgrimages, processions, fiestas, joyful songs, devotion to the Virgin Mary and a deep relationship with the suffering Christ. Bishop Ramirez also notes how this emotion, joy and spontaneity in ritual and worship is a shot in the arm for the U.S. church experiencing a decline in church attendance among English-speaking Catholics.

Much remains to be said about the Latino experience in the U.S. as it is an evolving situation in church and society. But this book is a good starting point for understanding where we are today.

PREVIOUS: ‘Free Fire’ takes a shot at grim humor between bullets, but misses

NEXT: Of genocide and the people who kept ‘The Promise’