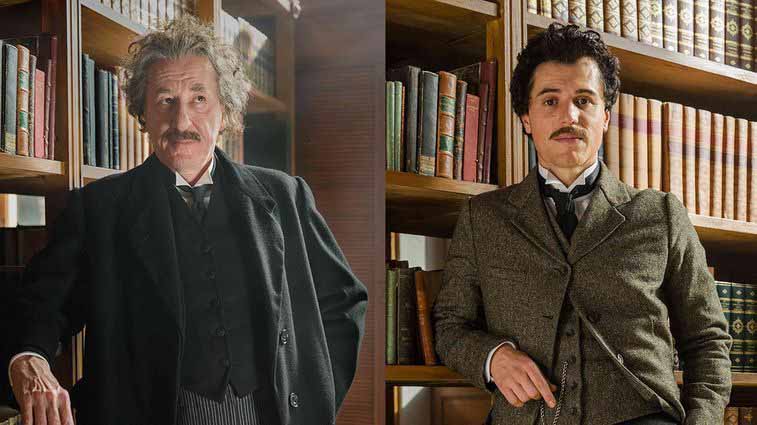 To judge by this initial venture’s preliminary results, episodic programming has a promising future at a network better known for documentaries about science, nature, culture and history.

That said, this is adult fare. In addition to such mature themes as anti-Semitism, sexism, war and nuclear weapons, “Genius” also contains depictions of adultery, though these are dealt with in a frank but not overtly graphic manner.

The two episodes available for preview highlight Einstein’s life before he emigrated to the United States in 1933, escaping the imminent threat the rise of Adolf Hitler’s Nazi party posed to the Jewish scientist — and to his wife, Elsa (Emily Watson).

A moment at the first hour’s conclusion will vividly impress viewers. Having applied for a visa to travel to New Jersey’s Princeton University, the Einsteins meet with Raymond Geist (Vincent Kartheiser), an official at the U.S. Consulate in Berlin.

Geist surprises and perturbs the Einsteins when he vigorously questions their application; similar requests from them had been routinely approved in the past. Geist, it turns out, is acting at the behest of FBI Director J. Edgar Hoover (T.R. Knight), whose suspicions have been roused by Einstein’s pacifism.

Those familiar with Hoover’s reputation for ruthlessness will feel his powerful, chilling presence.

This first episode shuttles back and forth from the 1890s, when Einstein was a young, rebellious student, to the 1920s, when the Nazis first came to his attention, and on to the following decade as he prepared to escape Germany.

These time shifts introduce us not only to Rush but to Johnny Flynn, who plays the younger Einstein. The second episode alters the focus, placing Einstein’s future first wife, Mileva Maric (Samantha Colley), beside him at the center of the drama.

They meet in 1896 when both are physics students at Zurich’s Swiss Federal Polytechnic School. The sexism Maric encounters there proves almost a worse handicap than the clubfoot with which she was born.

She has romantic obstacles to overcome as well. Early on in her relationship with Einstein, Maric’s resentment boils over when she discovers he’s still writing love letters to his first girlfriend, Marie Winteler (Shannon Tarbet).

“Don’t you understand,” she says, “how strong I must be to have the slimmest hope of being taken seriously, to be given an ounce of the respect you receive instantaneously by virtue of your manhood?”

Portraying Maric as Einstein’s collaborator, the filmmakers work to counteract the ongoing sexism that, in their view, has caused her contributions to Einstein’s work to go underestimated.

If this revisionist characterization is sustained in subsequent episodes, as seems probable, it will likely engender controversy. Most historians believe Maric didn’t collaborate with Einstein in 1905 on his breakthrough “Annus Mirabilis” papers, including his famed “Special Theory of Relativity.”

Although too tall for the role, Rush is outstanding as the older Einstein, and the ever-wonderful Watson is pitch-perfect as Einstein’s long-suffering but realistic second wife — who also happened to be the physicist’s first cousin.

But Flynn and Colley are revelations in their parts. Portraying Einstein’s youthful ardor for new ideas — combined with his tendency to step on toes — and his irrepressibility contrasted with his carelessness toward those closest to him, Flynn’s Einstein somehow emerges as likable and relatable.

Future installments will likely emphasize Einstein’s controversial support for the atomic bomb, which he later regretted, as well as his messy personal life, which involved multiple affairs with women, including Russian spy Margarita Konenkova (Ania Bukstein).

Based on only two episodes, it’s difficult to ascertain precisely how the series will depict these events. But those grown viewers for whom it’s suitable will want to stay tuned to “Genius.”

NEXT: ‘Blackwood Crossing’ a top choice for a spiritually rich video game