In ‘The Circle,’ social media titan demands loyalty and truth 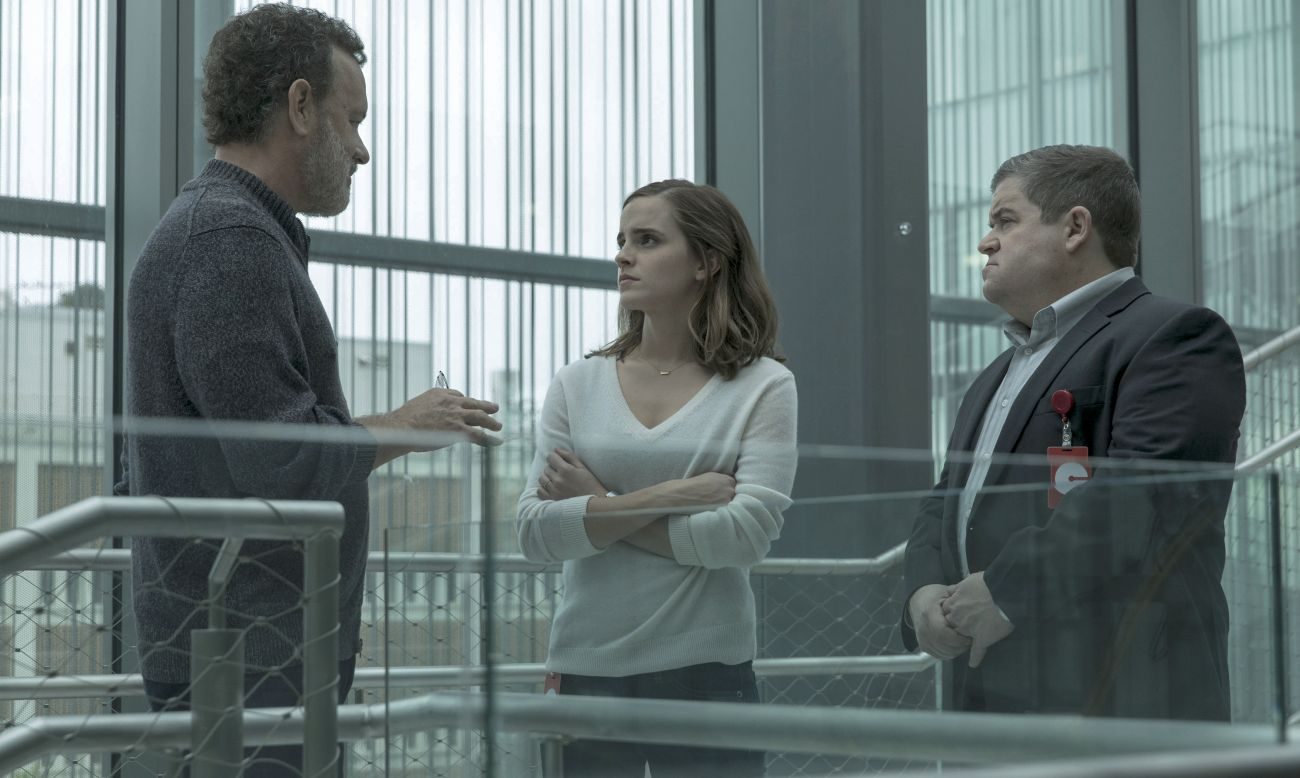 Tom Hanks, Emma Watson and Patton Oswalt star in a scene from the movie "The Circle." (CNS photo/STX Films)

NEW YORK (CNS) — Big Brother is watching you, and he has nothing to do with the government. Such, at least in part, is the message of the confused cautionary tale “The Circle” (STX).

While perfectly acceptable for a wide swath of grown-ups, director James Ponsoldt’s adaptation of his co-writer Dave Eggers’ novel includes a crucial scene that probably puts it over the line for all but the most mature teens.

Emma Watson plays San Francisco office worker Mae Holland. Bored with her job at a traditional firm, Mae is thrilled when her friend Annie (Karen Gillan), an employee of the titular company, the world’s leading social media outfit, gets her an interview there.

Once on the inside, however, Mae finds herself conflicted about her new environment.

She’s drawn to the charismatic figure of Eamon Bailey (Tom Hanks), the most visible of the Circle’s three founders (Patton Oswalt portrays Tom Stenton, Eamon’s more subdued collaborator at the top). And she’s grateful when the Circle’s in-house medical staff arrange to have her parents, Bonnie (Glenne Headly) and Vinnie (Bill Paxton), added to her health insurance plan. Since Vinnie suffers from multiple sclerosis, this is a real boon.

But Mae also quickly discovers that the Circle’s corporate culture is unsettlingly cult-like. And her initial enthusiasm is also dampened by her encounters with Ty (John Boyega) the now-marginalized, and disenchanted, third creator of the firm.

The Circle’s stated goal of enlisting every person on the planet as a member is obviously problematic since it raises troubling issues about privacy and the power of big business. Yet, although overworked Annie recognizes this, Mae does not.

Instead, taking her cue from Eamon, she buys into such Circle slogans as “Secrets Are Lies.” Mae even suggests that the government should make membership in the Circle a prerequisite for voting.

Though already awakened to the Circle’s dark side, Mae still has enough ardor to agree to go fully “transparent,” that is, to have her life made totally available online 24/7 to be witnessed and commented on by millions of Circle subscribers. This experiment in privacy denial soon has negative consequences for Bonnie and Vinnie and even worse ones for Mae’s would-be boyfriend, gadget-shy woodcarver Mercer (Ellar Coltrane).

As all of this suggests, Mae never seems to come down on one side or the other of the movie’s philosophical divide. Even after a climactic crisis, and a gotcha plot twist, her stance remains unclear.

So it’s hard to guess what the ultimate takeaway is meant to be. And the fact that the proceedings are lacking in energy throughout leaves the audience with little motive to exert themselves trying to solve this thematic puzzle.

The film contains brief semi-graphic marital lovemaking, some sexual humor, a few uses of profanity, at least one rough term as well as several crude and a couple of crass words. The Catholic News Service classification is A-III — adults. The Motion Picture Association of America rating is PG-13 — parents strongly cautioned. Some material may be inappropriate for children under 13.

PREVIOUS: ‘How to Be a Latin Lover’ quickly goes from spicy to dull

NEXT: ‘Guardians of the Galaxy Vol. 2’ is beyond the orbit of younger viewers