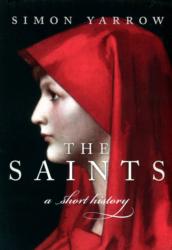 There seems to be an almost endless supply of inspirational, biographical and hagiographical books about saints.

There are dictionaries of saints and classic sources, like Butler’s “Lives of the Saints” and the classic from the late Middle Ages, Jacobus de Voragine’s two-volume “Legenda aurea” (English edition, “The Golden Legend: Readings on the Saints”). In a few cases, saints even wrote books themselves, most notably the Rule by St. Benedict of Nursia, St. Therese of Lisieux’s “Story of a Soul” and St. Ignatius of Loyola’s Spiritual Exercises.

British scholar Simon Yarrow’s book belongs in none of these categories. Rather, it is an academically informed popular historical study of the phenomenon of saints. Yarrow guides the reader on a walk through the world of saints from the crucifixion of Jesus down to the present.

His sources include literature, art and politics, and he enlightens with insights into how churches’ understandings of saints changed with the passing of the centuries. Finally, Yarrow examines characteristics of sainthood including martyrdom, asceticism, virginity, etc.

Bringing his discussion into the 21st century, Yarrow’s book puts the present into perspective in comparison with earlier eras. “One hundred and fifty-eight saints were made between 1846 and 1978,” he writes. “Since then more than a thousand saints have been canonized and a small army of the beatified await promotion to full cult status upon their completion of a second miracle.”

St. John Paul II, Yarrow adds, “was the first great canonizing pope of the modern age. He canonized 483 saints during his pontificate, more than all his predecessors combined.”

“The Saints” is a book to read not so much for inspiration as for information, most of it the result of solid historical research. Some readers, however, may find some of Yarrow’s observations perplexing. One example: “A curious parallel exists between the frequent death of young saints (e.g. St. Aloysius Gonzaga) at the age of 24, and the likes of Janis Joplin, Jimi Hendrix, Jim Morrison, Kurt Cobain and Amy Winehouse, all known for their early deaths as members of the ’27 Club.'” Yarrow even finds a place in his discussion for, yes, Superman!

Overall, “The Saints” is a captivating study of saints and the saint-making process down through more than 2,000 years. Anyone devoted to a few or many saints would do well to read this book to allow the results of scholarship to nourish an increased maturing to their devotion.

Finley is the author of more than 30 books on Catholic themes, including “What Faith is Not” (Sheed & Ward) and “The Rosary Handbook: A Guide for Newcomers, Old-Timers and Those in Between” (Word Among Us Press).

PREVIOUS: Entree of morality in ‘The Dinner’ proves too tough to cut through

NEXT: Beneath the filthy exterior shines a positive tale, just barely