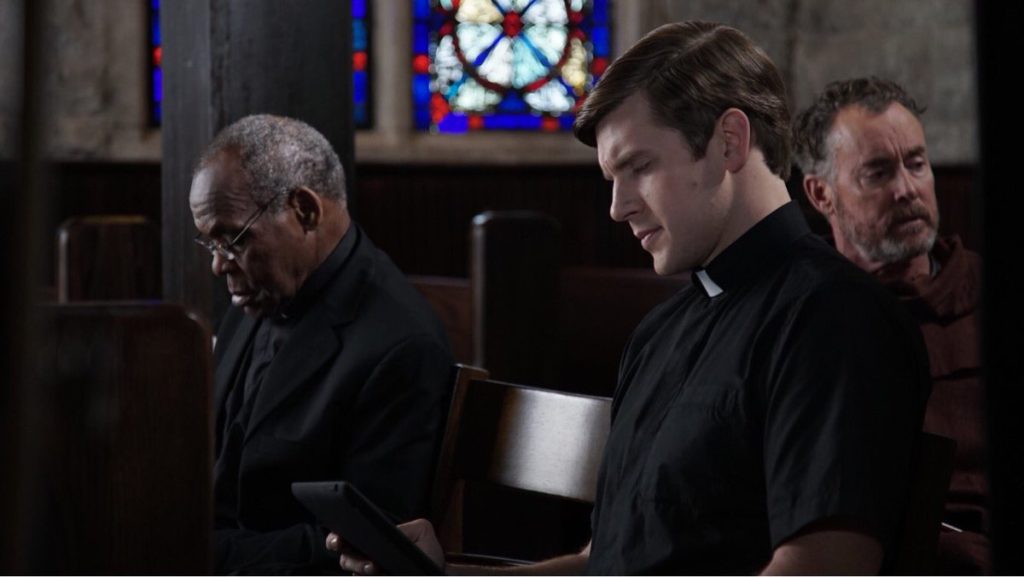 NEW YORK (CNS) — A self-identified romantic comedy built around a priest’s struggle with his vocation is bound to be doubtful fare for viewers of faith. And so it proves with “The Good Catholic” (Broad Green).

While free of sensationalism, writer-director Paul Shoulberg’s awkward film displays a secular, though not disrespectful, outlook on its subject matter while also betraying a lack of familiarity with clerical life that renders it unconvincing.

One aspect of modern Catholicism the movie does get roughly right is the sad fact that, as he sits in the confessional on a Friday evening, earnest young clergyman Father Daniel (Zachary Spicer) has plenty of time to say his rosary because no one shows up on the other side of the screen. Even when someone does eventually appear, it turns out to be a religiously indifferent young lady with an agenda of her own.

Jane (Wrenn Schmidt), revealed in later scenes to be a vaguely bohemian coffee house singer, starts things off by abruptly announcing that she is terminally ill. But she hasn’t come seeking absolution in preparation for death. Instead, to Father Daniel’s understandable confusion, she solicits funeral arrangement advice from him, e.g., how can she avoid having her mother choose the outfit in which she’ll be buried?

Thus begins a friendship made tense by mutual attraction — a relationship that eventually forces Father Daniel, who was already undergoing a crisis of faith even before he met Jane, to reassess his commitment to the priesthood. (The reports of Jane’s impending death soon turn out to have been greatly exaggerated; chalk it up to her supposedly endearing quirkiness.)

Having set himself the task of depicting the inner workings of a parish, Shoulberg fails to deliver on even the most basic details. Father Daniel’s church, for instance, is clearly not Catholic. To guess from its layout, it’s more likely an Episcopal or Lutheran sanctuary.

Father Ollie is pleased that the “Sunday school” kids have asked him to speak to them, apparently unaware that Catholics don’t use that term. Even more jarringly, he later jokes about why people come to church, and cites the “free communion wafers” on offer as his own motivation.

Father Daniel’s background story casts doubt on the legitimacy of his call in the first place. He passively acquiesced, so the dialogue suggests, in his recently deceased dad’s wish to have a priest in the family. On that basis, some Catholic viewers may be accepting of — if hardly comfortable with — the plot’s predictable outcome.

The film contains religious themes requiring mature discernment, at least one rough and several crude and crass terms and an obscene gesture. The Catholic News Service classification is A-III — adults. The Motion Picture Association of America rating is PG-13 — parents strongly cautioned. Some material may be inappropriate for children under 13.

PREVIOUS: Stephen King’s creepy clown is far from kid-friendly in dark, violent ‘It’

NEXT: ‘Home Again’ may be good excuse to hit the road