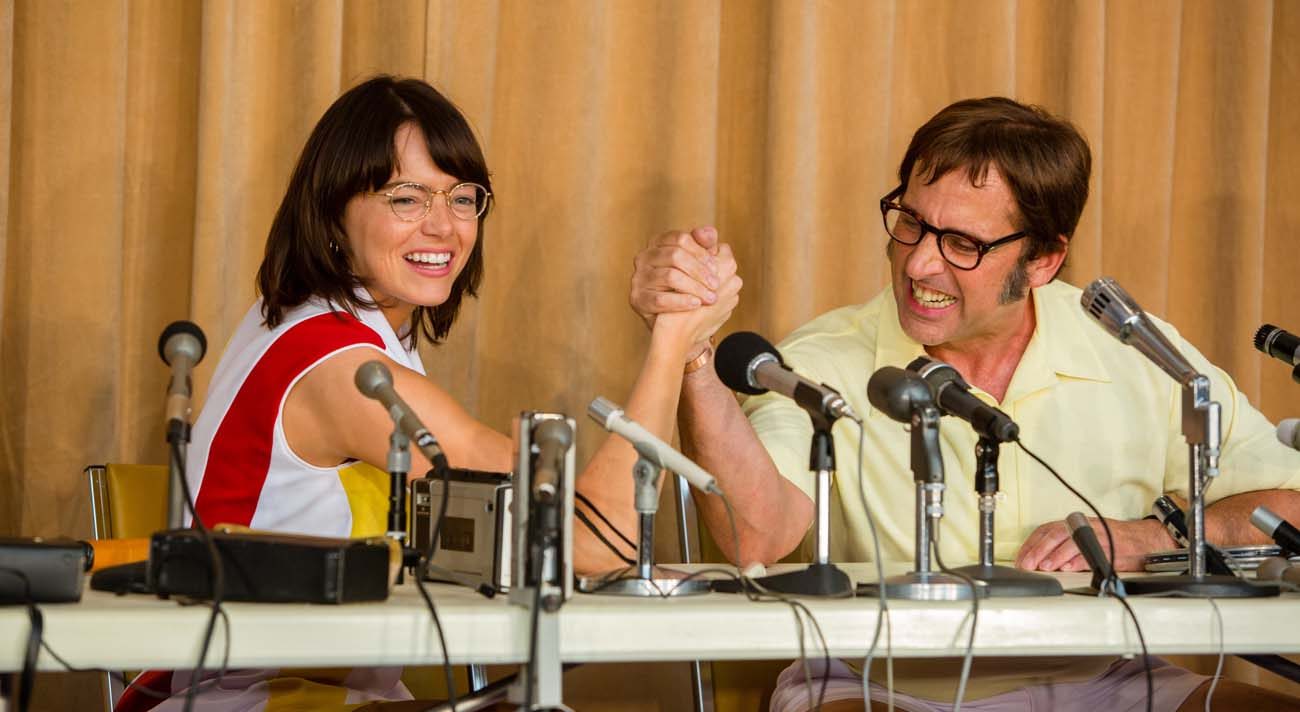 Emma Stone and Steve Carell star in a scene from the movie "Battle of the Sexes." (CNS/Twentieth Century Fox)

NEW YORK (CNS) — The early 1970s in all its revanchist sexism, double-knit-fabric garishness and choking cigarette smoke is the setting of the coming-of-age story that is “Battle of the Sexes” (Fox Searchlight).

That the coming of age arrives for Billie Jean King (Emma Stone) when, as a 29-year-old champion tennis player, she achieved her greatest fame by defeating 55-year-old Bobby Riggs (Steve Carell) in the gaudiest, most-hyped tennis exhibition match of all time in Houston’s Astrodome, makes this no less poignant.

This lightly fictionalized version of history is ultimately more about King than the past-his-prime Riggs, but the script by Simon Beaufoy, as directed by Jonathan Dayton and Valerie Faris, takes pains to show each character’s harsh isolation and crippling doubts leading up to the match.

King, married to the bland Larry (Austin Stowell), copes with her realization that she’s attracted to hairdresser Marilyn (Andrea Riseborough) despite the scandal and loss of income that would have meant then. Cut off from equal prize money by the all-male gatekeepers of the U.S. Lawn Tennis Association, she seeks equal pay for women on the small Virginia Slims tour. (A cigarette sponsoring tennis? Welcome to the ’70s!)

Riggs, trapped in a corporate job and a loveless marriage to wealthy socialite Priscilla (Elisabeth Shue) and unsuccessfully struggling with a gambling addiction, is desperately trying to make himself relevant in a sport in which he’d excelled decades before, but he has to settle for hustler stunts such as filling the tennis court with livestock.

He finally sees a lucrative opportunity — the chronic gambler’s vision of the ultimate payoff — by promoting himself as the ultimate male chauvinist pig who takes on women to “prove” male superiority in tennis and other matters.

Riggs isn’t entirely serious, but most of professional tennis, which has long spurned his clowning, is on his side, and he knows it all makes for good TV.

King’s other major rival is Australian Margaret Court (Jessica McNamee), the only player on the women’s tour with a child, and suspicious of King’s sexuality. “That’s what happens on an all-women’s team,” Court tells husband Barry (James Mackay). “Licentiousness, immorality, sin.”

Well, not in this movie, no. Stone makes King both conflicted and a little prim, and Larry, who knows the score and also Billie Jean’s ultimate fixation only on her game, eventually lectures Marilyn with, “I’m her husband — and we’re just both a phase.”

There is no gay propaganda here. King, who has been a lesbian icon for decades, is portrayed as being as conflicted over her sexuality as her tennis game, and this is presented in a straightforward and non-lurid manner.

Real life is never this neat, of course, but the plot necessarily churns toward the big showdown with all the formula and backstage cliches this requires.

Riggs first takes on Court, and manages to break her confidence as he defeats her before the match with King that drew 90 million TV viewers. King, however, is one tough cookie who polishes her skills while Riggs gulps vitamins and fails to train.

While the treatment of homosexuality is discreet, the inclusion of the subject, though historically accurate, will nonetheless diminish the picture’s appeal for faithful moviegoers period. It also requires a restrictive classification for what would otherwise be suitable fare for a general adult audience.

NEXT: ‘The Story of Us’ tells of universal themes, with moral stumbles