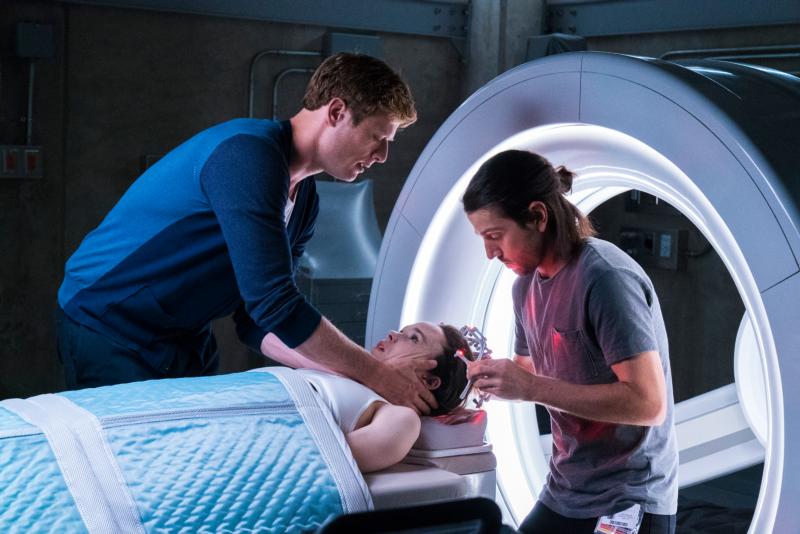 NEW YORK (CNS) — Far from heavenly, but not exactly hellish either, the tepid afterlife-focused thriller “Flatliners” (Columbia) is more like a visit to limbo.

Comparisons to a spell spent sitting in your doctor’s waiting room might be equally apt, since this sequel of sorts to the eponymous 1990 film once again involves a group of medical students.

A link to the original is provided by the presence of one of its stars, Kiefer Sutherland, aka Nelson Wright, now all grown up and teaching med school with an entirely new name, Dr. Barry Wolfson. Those under his tutelage include hard-driving, slightly troubled Courtney (Ellen Page) whose memories of a tragic car accident are shared with the audience by way of vague flashbacks.

Courtney has an interest in near-death experiences. To study the physiology of that situation, she persuades two of her peers, Jamie (James Norton) and Sophia (Kiersey Clemons), to stop her heart, then quickly revive her. While she’s deceased, they’ll scan her brain for any lingering activity.

Unsurprisingly, complications arise. These require the hurried intervention of Ray (Diego Luna), the wisest member of Courtney’s circle of friends who — probably for that very reason — was not in on the scheme originally. When Courtney does eventually return to the land of the living, she comes back equipped with enhanced skills, impressing even the easily dissatisfied Dr. Wolfson.

As a result, and despite Ray’s disapproval, others decide to give mortality a spin, including Jamie, Sophia and yet another of Courtney’s pals, Marlo (Nina Dobrev). But day-tripping to the great beyond turns out to have a serious downside which even Ray has not foreseen: The revivified soon begin to have eerie hallucinations, all of them in some way connected to dark secrets from the past.

Director Niels Arden Oplev’s horror-tinged drama has a basically sound moral outlook as far as forgiveness and honesty about past misdeeds are concerned. And at least one plot development can be read as somewhat pro-life.

A couple of liaisons among the future physicians, on the other hand, are not at all what the doctor ordered. That’s especially true of the affection-free encounter with Jamie by which Sophia signals her rebellion against the constraints of her controlling mother (Wendy Raquel Robinson). Lest either Mom or the audience miss the point, the unloving couple makes quite a racket.

While the ensemble’s experiments hardly constitute suicide, they are obviously irresponsible in the extreme, violating the moral obligation, under the Fifth Commandment, to nurture and preserve good health. The whole premise is so far removed from real life, however, that assessing its ethical standing seems irrelevant. It’s doubtful any viewers will want to try this at home.

The film contains fleeting gory violence, semi-graphic casual sex, partial nudity, mature themes including abortion, about a half-dozen uses of profanity and at least one rough and several crude terms. The Catholic News Service classification is L — limited adult audience, films whose problematic content many adults would find troubling. The Motion Picture Association of America rating is PG-13 — parents strongly cautioned. Some material may be inappropriate for children under 13.

PREVIOUS: On TV or at the movies, the water’s fine to dive into ‘Swim Team’

NEXT: ‘Battle of the Sexes’ shows the ’70s in a smoke-hazy light