‘The Story of Us’ tells of universal themes, with moral stumbles 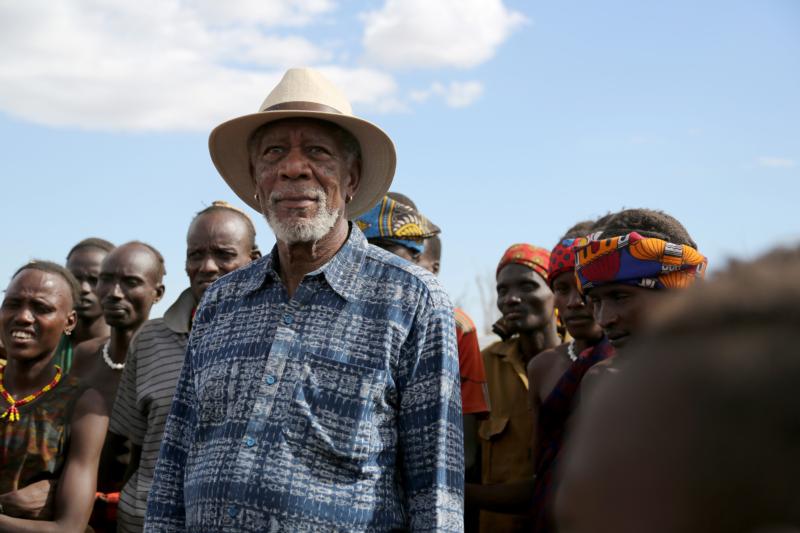 Morgan Freeman is pictured with villagers during the Ethiopian Peace Ceremony in Omo Valley in a scene from the documentary series “The Story of Us.” The series debuts on cable’s National Geographic Channel Oct. 11, 9-10 p.m. EDT. (CNS photo/Maria Bohe, National Geographic)

A companion to National Geographic’s Emmy-nominated “The Story of God,” which finished its second season last January, “The Story of Us” explores universally human themes in vignettes.

The celebrated actor Morgan Freeman’s Revelations Entertainment, which also produced “The Story of God,” produces this series as well. And as he has done in the first series, Freeman becomes the viewers’ guide and an actor in his global journey to discover “the ties that bind us, the common humanity inside us,” which is the “story of us.”

Looking more youthful than his 80 years, yet reflecting the hard-earned wisdom, which comes from living that long, Freeman comes across as someone’s hip grandfather. Open to new ideas and experiences, Freeman appears sincerely curious about his story’s subjects. And of course, the consummate, venerable actor helps viewers identify more closely with the profiled persons’ experiences and humanity.

As an African-American, moreover, Freeman embodies the multiculturalism the series embraces, and his attitudes reflect the show’s progressive humanism. He travels to Guatemala, Bolivia and Ethiopia, among other locales, to interview his subjects, who illuminate the series’ themes and amplify its philosophy.

The first three episodes examine humanity’s desire for freedom, its quest for peace and the power of love. Other episodes will explore our political and cultural divisions, how we can share power more equitably and the spirit of people who work to change the world.

The snapshots Freeman presents will give viewers much to contemplate and with which to wrestle.

Consider Albert Woodfox’s story. Already serving time in Louisiana’s notorious Angola prison, the African- American was falsely convicted of a prison guard’s murder in 1972. Woodfox consequently spent 23 hours a day — every day, for 43 years — in a 6-foot-by-9-foot cell, the longest anyone in the United States has spent in solitary confinement.

Released in 2016, after his conviction was finally overturned, Woodfox tells Freeman, “It’s a living nightmare with one horror after another is the best way I can describe prison.” But he adds, “My mind and emotions were beyond the confinement of that cell.”

The friendship between Catholic Daniel Walsh and a Protestant woman (who’s afraid to reveal her identity) in Belfast, almost 20 years after the 1998 Good Friday peace accord ended “The Troubles” in Northern Ireland, demonstrates achieving peace doesn’t end when war does. But, as Freeman says, “as long as people are willing to cross the divide, there’s hope for peace.”

The above stories evoke and provoke as the filmmakers intend, and as good documentaries should. However, other aspects of “The Story of Us” are problematic. Transgender woman Victoria Khan’s story is a primary example. Viewers will feel compassion for the multiple tragedies she experienced in her Afghanistan childhood.

She endured the atrocities of that country’s protracted civil war, and witnessing her young sister being raped by an imam, she carried her sister to safety, only to escape again, after jihadists tried to compel her join their company.

But the 18 surgeries Victoria experienced to become a woman will trouble Catholic viewers. She insists she did it to become free, but Catholics understand, as a child of God, Victoria, like the rest of us, was born free. And Freeman’s affirmation of Victoria’s decision to change genders and repudiate God’s most fundamental gift will especially disturb Catholics.

Freeman’s misty-eyed celebration of 1967’s “Summer of Love” as the manifestation of the love toward which societies should aspire also is a morally dubious proposition. That putative summer, in reality, engendered promiscuity and infidelity, which significantly contributed to the American family’s unfortunate fragmentation.

There’s much to recommend and like about “The Story of Us,” but to appreciate its value adult viewers should carefully sift through some of its questionable arguments.

PREVIOUS: ‘Battle of the Sexes’ shows the ’70s in a smoke-hazy light

NEXT: Wilderness trek takes the usual route in ‘The Mountain Between Us’