Likable sitcom ‘Living Biblically’ on CBS needs to be funnier 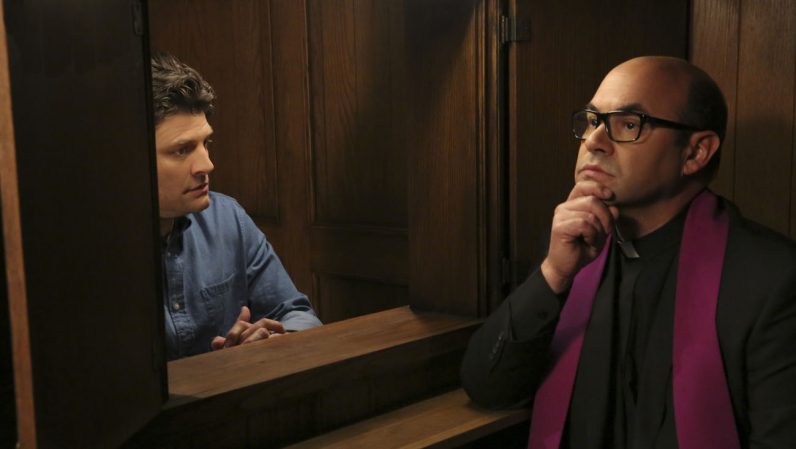 References to sexually transmitted diseases and a potential homosexual relationship are among the problematic elements that mar the distinct concept of this comedy.

After his best friend of 30 years, Ray, dies, Chip — as the series opens — visits his parish priest, Father Gene (Ian Gomez), in the confessional. A self-identified lapsed Catholic, Chip tells Father Gene: “I’m a good man. And I want to be great.” That’s why he has decided to live “100 percent by the Bible. To the letter.”

Father Gene particularly attempts to steer Chip away from interpreting the Bible too literally. The priest urges Chip to follow scriptural teachings in a more general way, reminding his parishioner of something he tells his religious education students: that “Bible” is an acronym for Basic Instructions Before Leaving Earth.

As Chip feverishly attempts to manage each moment of his experiment as if it were a crisis, his editor, Ms. Meadows (Camryn Manheim, “The Practice”), concludes Chip’s story could sell more papers. So she invites him to write a regular column about his experience, which means more money for the expectant couple.

Because she hopes it means he will break out of the funk he has been in since Ray died, Leslie patiently indulges Chip’s endeavor, which he describes as a “soul cleanse, until the baby is born.” But when Chip’s scientist mother-in-law, Diana (JoBeth Williams), comes to visit, she resists Chip’s philosophy directly.

Chip attempts to reassure Diana: “I have found faith in something bigger than myself, and it’s making me a better person and husband.” But Diana responds: “Faith is what people turn to when they’ve given up on science.”

Later that evening, the couple rushes Diana to the hospital because she thinks she may have had a heart attack. Lesley asks Chip to pray. It’s a sincere, authentic prayer, and when Diana realizes she only has heartburn, she allows, at least, that Chip’s prayer didn’t hurt.

Despite Diana’s cynicism, “Living Biblically” refreshingly affirms the value of religious belief in people’s lives. “Prayer opens us up,” Father Gene says, “and brings his grace into our lives and helps us when we need it most.” This welcome attitude is, obviously, rarely expressed on a contemporary TV show, let alone a sitcom.

The series’ portrayal of the clergy is a mixed bag, however. Gomez’s portrayal of Father Gene is one of the show’s virtues.

Likable, accessible, with a healthy sense of humor, Father Gene nonetheless comes across with a sincere yet realistic appreciation of his faith, and not at all as a stock figure. But Krumholtz’s Rabbi Gil, to date, isn’t as well rounded as Father Gene — and functions largely to provide comic relief.

Some truly funny lines are sprinkled throughout the scripts. “I consider Chip Catholic,” Leslie says, “the same way I consider Olive Garden Italian.” When Chip asks Father Gene what the church thinks of marijuana, the priest says, “We don’t love it. That’s John 4:20.”

But these exceptional moments can’t overcome long stretches in the series, which are painfully, dreadfully unfunny. The show’s high-minded premise is finally at odds with its sitcom nature.

Viewers will want to root for this rare program about someone who wants to become a better person. But they should hope that the humor on “Living Biblically” improves, even as the series retains its originality.

PREVIOUS: With ‘Black Panther,’ racial empowerment is thoughtful and fun

NEXT: ‘Paul’ film producer: ‘Real important to tell the story of God’s mercy’