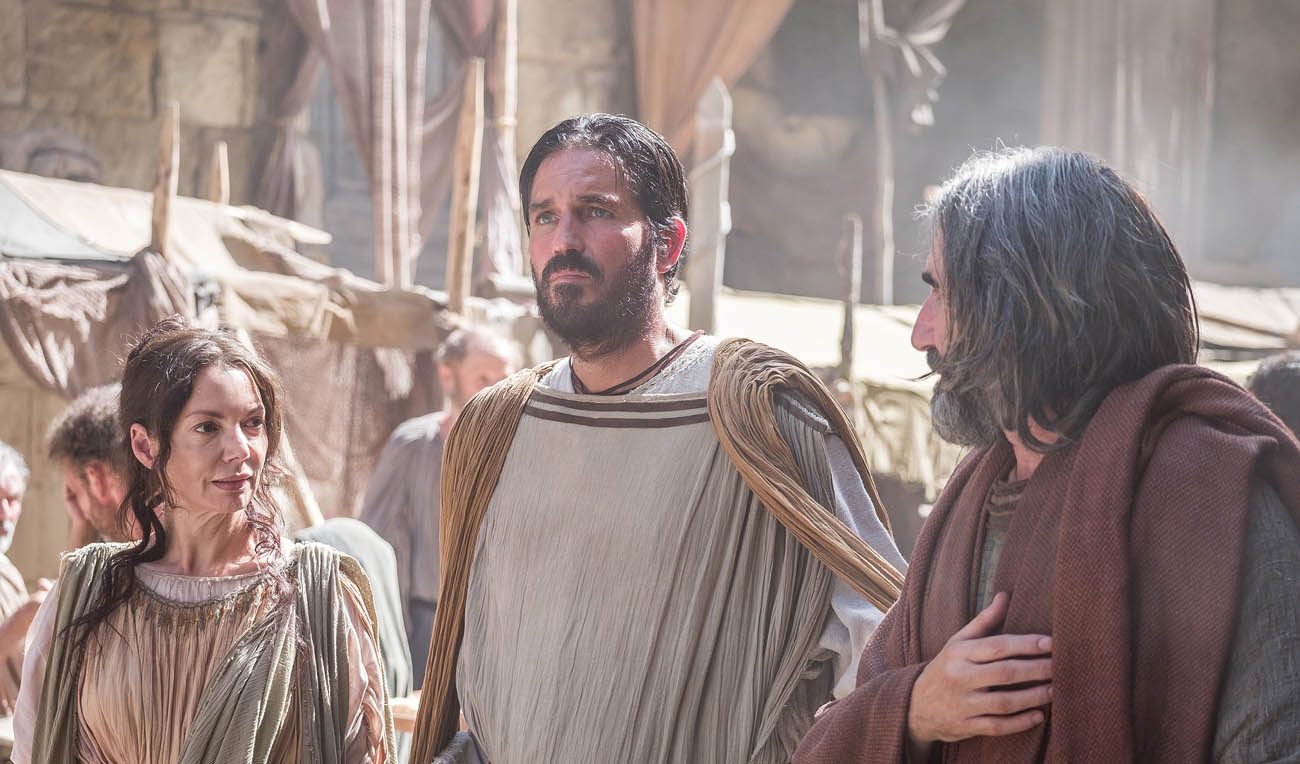 Joanne Whalley as Priscilla, Jim Caviezel as Luke and John Lynch as Aquila are seen in the film "Paul, Apostle of Christ." In an interview with Catholic News Service, Dominican Sister Laurie Brink, an associate professor of New Testament studies at Catholic Theological Union in Chicago, sorts out the plausible and the implausible in the movie, to be released nationwide March 23. (CNS photo/Sony Pictures)

WASHINGTON (CNS) — Don’t take everything you see in the new movie “Paul, Apostle of Christ” as, well, gospel. Even the filmmakers have said much of what is on screen is conjecture.

Compared to today’s information-saturated age, little is definitively known about St. Paul and St. Luke, the film’s two main characters. A bit more is known about the time of Roman Emperor Nero, under whose rule the movie is set.

Even the identity of those credited with writing more than half of the books of the New Testament is up for grabs, according to Dominican Sister Laurie Brink, an associate professor of New Testament studies at Catholic Theological Union in Chicago.

How much of Paul’s letters can be attributed to him “depends on who you ask,” Sister Brink told Catholic News Service in a March 7 telephone interview. “There are disputed ones and undisputed ones.”

In the undisputed category are Romans, 1 and 2 Corinthians, 1 Thessalonians, Galatians, Philippians and Philemon. The others, she said, are “variously dated much later than we know Paul lived,” although they originated “from a later Pauline community.” Scholars can make that distinction, Sister Brink said, based on vocabulary, sentence structure and the topics that are addressed.

As for the Gospel according to Luke and the Acts of the Apostles, both of which are attributed to St. Luke, “that’s a larger question,” she said. “Who was St. Luke? Tradition has the person named as Luke, and tradition suggests he was a companion of Paul, from a citation based on Colossians.” But beyond that, the trail grows murky.

“In order to understand the historical author of any of our texts, the only thing we have to go by is the texts themselves. What can we know about this person based on what they wrote?” said Sister Brink, adding that learning about a person based mainly on their writings is akin to “looking at it in a mirror.”

“The person who wrote Luke is very well-educated,” Sister Brink said. “He’s Greek, his diction is very good, his use of the language is very good. He improves on Mark’s Gospel, which he uses as his source. He seems to be familiar with the patron-client system.” Theophilus, who is mentioned in both Luke and Acts, was Luke’s patron.

“Paul, Apostle of Christ,” which is to be released in theaters nationwide March 23, has Luke visiting Paul in a prison in Rome. “That makes good cinematography, but since we don’t know the identity of Luke — we just know that tradition has named him that. We don’t see that (prison visit) in the text,” Sister Brink said.

Paul is jailed in the movie after having been accused of setting the blaze that destroyed a good chunk of Rome.

“The fire in Rome, according to Tacitus, a Roman historian, was likely started by the minions of Nero, who had his eye set on a particular piece of property,” Sister Brink said. “But everybody already had all that property. The only way to get that was to burn the property, accuse the Christians, make them scapegoats, and acquire the property.”

Another fire-related element in the film is solid fact: Christians were burned alive to bring light to the dark city. “Yes, that is true!” Sister Brink told CNS. “They were crucified and they were set on fire. They were like lamplights on the side of the road. Now, this is according to Tacitus, and Tacitus didn’t like Nero.”

A small, beleaguered Christian community is shown hiding in an otherwise-deserted Roman compound in “Paul, Apostle of Christ.” One thing of which moviegoers can be sure, Sister Brink said, is that they didn’t live in the catacombs.

But by this point in history, one plot point in the film rings true: “The Our Father would have been known to this community,” according to Sister Brink.

Some scenes in the film mimic events elsewhere in the Bible.

Luke’s healing of the Roman prison warden’s daughter, while not miraculous, is reminiscent of Jesus’ healing of Roman centurion Jairus’ daughter. The warden and Paul, by this point a condemned prisoner, have an extended chat in the warden’s courtyard; by the end of Acts, Sister Brink said, “Paul is under house arrest. He is staying in some rental property, and there is a soldier guarding him.”

“They didn’t have prisons” as we know them today, she noted. Also, a band of younger, agitated Christians stages a raid on the prison to free Paul, but he refuses to leave; in the New Testament, an earthquake wrecks Paul’s jail, but he declined to escape.

Sister Brink, who had not seen the film at the time of the interview, said, “Some of this (drama) is probably coming from ‘The Acts of Paul and Thecla’ and ‘The Martyrdom of Paul.’ They are not canonical texts but they are great reads. They’re kind of like early Christian novels.”

Still, she gave the filmmakers credit. “Even if it’s not biblically or historically accurate, it gives people an opportunity to think about Paul, to know about Paul,” Sister Brink said. “For too long, Catholics have not paid any attention to Paul. Catholics have been Jesus-focused, and that’s good, but the apostle Paul is a pretty significant figure in our faith history. So good on them for trying.”

NEXT: Faith shines through as priest recounts grim captivity in Iraq