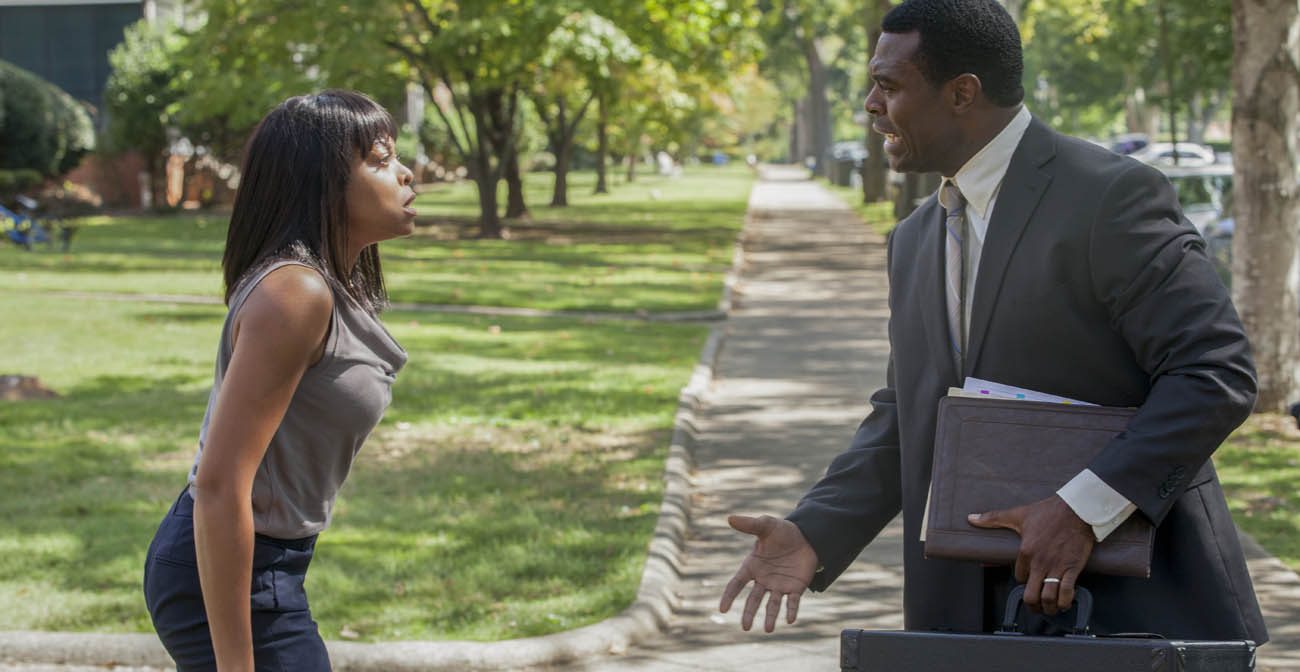 Taraji P. Henson and Lyriq Bent star in a scene from the movie "Acrimony." (CNS photo/Lionsgate)

NEW YORK (CNS) — Writer-director Tyler Perry pulls out all the stops in the lurid drama “Acrimony” (Lionsgate). Since his treatment of sexuality is as unbridled as all the other aspects of his film, this initially wild, ultimately over-the-top tale has a small appropriate audience.

The theme of the movie is a familiar one, namely, that hell hath no fury like a woman scorned or, in this case, one who thinks she’s been. Were it otherwise, Melinda (Ajiona Alexus in youth, Taraji P. Henson in maturity) would not be recounting her life story from a couch in the office of a psychologist to whose care she has been forcibly entrusted by a judge.

Melinda’s psyche, as flashbacks soon reveal, is an unstable mix of self-destructiveness and blind rage. Both come into play in her relationship with her college beau and eventual husband, Robert (first played by Antonio Madison, later by Lyriq Bent).

An inventor and apparent ne’er-do-well, Robert is too obsessed with a newfangled type of battery he has developed — and spends years trying to perfect — to hold down a job. But at least he’s learned his lesson where fidelity is concerned after Melinda, while still his girlfriend, caught him cheating in the RV he called home as a bachelor and reacted by ramming her car into it at full speed and capsizing the motor home.

Married Melinda manages to hold her wrath in check as Robert runs through the sizable inheritance she received from her mother, then endangers the family home she was also allotted in Mom’s will. But the end of her patience and a change in Robert’s fortunes coincide in a way that unleashes her mean streak once again, sending her on a revengeful rampage.

“Acrimony” plays on the divide between perception and reality: As the inclusion of Nina Simone’s rendition of “Don’t Let Me Be Misunderstood” on the soundtrack suggests, Robert — who is almost as devoted to his collection of Simone’s LPs as he is to his battery — may not be the heartless con man Melinda portrays him to be.

But Perry consistently emphasizes passion-driven spectacle over genuine insight or believability. In the end, it’s all about the thrill of watching that trailer tip over and witnessing similar, even more extreme acts of desperation.

Thick-skinned adult viewers in search of a “Mommie Dearest”-style guilty pleasure may enjoy watching Melinda gear up for a fresh tantrum. All others should keep their distance.

NEXT: Movie review: Ready Player One