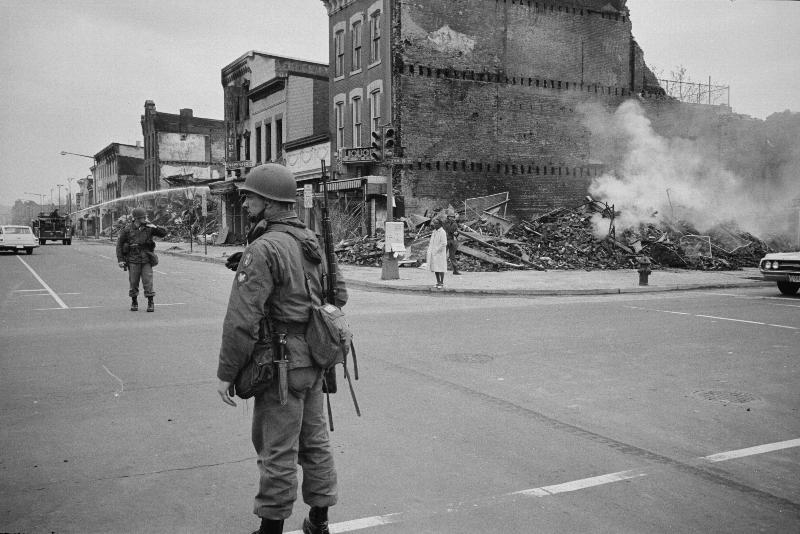 A soldier stands guard at 7th and N streets in the Northwest section of Washington in this April 8, 1968, photograph courtesy of the Library of Congress. The photo shows the ruins of buildings destroyed during the riots that followed the assassination of the Rev. Martin Luther King Jr. (CNS photo/Reuters, via Library of Congress)

NEW YORK (CNS) — Tom Hanks is among the executive producers of the sharp, involving and edifying docuseries “1968: The Year That Changed America.” The four-hour CNN production debuts over two evenings: Sunday, May 27, and Monday, May 28, 9-11 p.m. EDT each night.

Hanks and his fellow producers Mark Herzog and Gary Goetzman rely on rare archival film footage and extensive commentary from journalists, historians and eyewitnesses to create a richly textured, comprehensive survey of the political and cultural forces that shaped one of America’s most tumultuous years.

Each episode opens with a 1968 hit song. Taken together they set the tone for the series as a whole: Simon and Garfunkel’s “The Sound of Silence,” the Beatles’ “Revolution,” the Chambers Brothers’ “Time Has Come Today,” and “Sympathy for the Devil” by the Rolling Stones.

As the documentary opens, President Lyndon Johnson gives his State of the Union Address on Jan. 17. Smiling through the irony, he quotes fellow Texan and former Speaker of the House of Representatives Sam Rayburn as saying, “Congress always extends a very warm welcome to the president as he comes in.” Johnson seems to possess a foreboding sense of just how bad things will get for his administration.

As “1968” well explains, violent unrest at home and the long-running conflict in Vietnam — which appeared at the time to be, in the words of former Bobby Kennedy speechwriter Jeff Greenfield, “a war that never ends” — plagued Johnson as the year began. He would be up for re-election in November.

Initially considered a prohibitive favorite based on his incumbency, Johnson nonetheless faced challenges from within his own party. After U.S. Sen. Eugene McCarthy of Minnesota came in a close second in the New Hampshire primary and Kennedy, then a New York senator, joined the race, Johnson announced he was withdrawing from it on March 31.

The April assassination of the Rev. Martin Luther King Jr. and Kennedy’s slaying in June bookend the series’ second episode. Although this is well-traveled ground, the documentarians still manage to add to viewer’s already considerable understanding of these tragic events.

“I’ve finally made it my own,” author Charles Kaiser quotes Kennedy as saying just before he was gunned down, shortly after declaring victory in California’s Democratic primary. And Greenfield notes this irony: “trying to avoid the crowds took him through that kitchen,” where his assassin was waiting.

Similarly, the series will enhance viewers’ understanding of the events that compelled King to travel to Tennessee to work on what would become his final cause: the Memphis sanitation workers’ strike.

As Pulitzer Prize-winning King biographer Taylor Branch explains, in that era, African-American garbage men couldn’t seek shelter from the rain anywhere whites could see them. Because of this prohibition, two men, Echol Cole and Robert Walker, perished in a gruesome accident, crushed by the compactor of their own truck.

In a significant oversight, “1968” fails to mention these martyrs’ names.

A more vital problem concerns Hanks, who is too intrusive in his role as commentator. He seems not to realize that having played an astronaut or a soldier on screen doesn’t necessarily qualify you to assess the Apollo 8 mission or the Tet Offensive.

Despite these shortcomings, “1968” distinguishes itself in a contemporary field crowded with films about King, Kennedy and the Vietnam War. Emphasizing the nexus between culture and political and social movements is one way the program separates itself from other, similarly themed documentaries.

“1968” also surfaces some exceptionally rare footage, reinforcing for the audience the anguish the nation was experiencing that year. Thus, one Vietnam combatant, Navy Chief Warrant Officer Wayne Forbes, sings a protest song in which St. Peter reassures him, “I know you’ll go to heaven, you’ve served your time in hell.”

Revelatory moments such as these make the series a rewarding experience for adults. Despite some salty language — a portion of it appropriately bleeped out — and the depiction of war, poverty, racism and social disturbances, many parents may feel that the educational value of “1968” renders it acceptable for older teens as well.