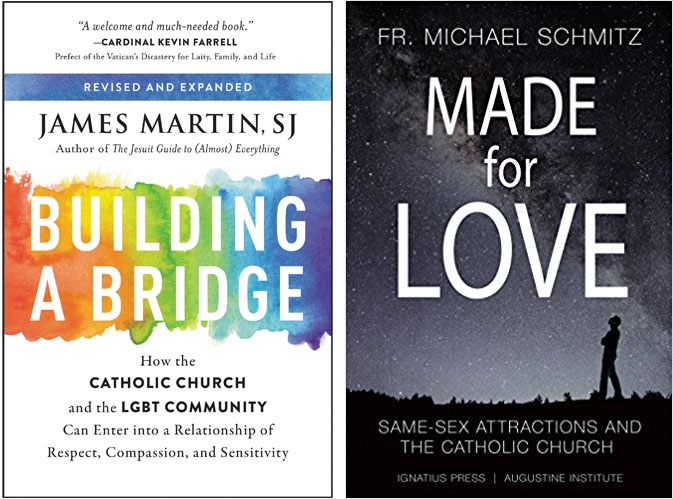 “Building a Bridge: How the Catholic Church and the LGBT Community Can Enter Into a Relationship of Respect, Compassion and Sensitivity”
by Father James Martin, SJ.
Harper Collins Publishers, (New York, revised edition, 2018).
190 pp., $14.99.

Two recent books by U.S. Catholic priests encourage a welcoming, respectful relationship between the church and gay and lesbian Catholics or the entire LGBT community.

I mention this point of commonality because these books differ in important ways — in their objectives and the parameters their authors establish for what are relatively brief works. But while the books are dissimilar, their similarities deserve mention.

“The message of Christ and the message of the Catholic Church (to a gay or lesbian member) is: You do belong here. This is your family,” Father Michael Schmitz writes in “Made for Love.”

Jesuit Father James Martin observes in “Building a Bridge” that the relationship between LGBT Catholics and the Catholic Church has been at times contentious and combative, and at times warm and welcoming.” But “much of the tension characterizing this complicated relationship results from a lack of communication and a good deal of mistrust.”

He comments that the virtue of respect calls for “treating LGBT Catholics as full members of the church by virtue of their baptism.”

In another point of apparent similarity, each author urges that respect be shown by and for everyone involved in conversations related to the Catholic Church and men and women within the LGBT community.

“For the church to exercise compassion, we need to listen. And when we listen, we will learn, we will be challenged, and we will be inspired,” Father Martin explains.

At the same time he asks, “What would it mean for the LGBT community to show respect to the church?” The church’s bishops, he says, “beyond what one might call ecclesial respect,” deserve “simple human respect.”

Some readers, I suspect, will view these as opposed, even competing books. Yet, it is hard not to notice the ground the authors share.

So I do not assume they must be set off against each other, nor do I presume they could not enter together into dialogue on the church and the LGBT community.

Father Martin is a well-known writer and lecturer, and is known to many for his frequent TV appearances as a commentator on today’s church. His book is an essay recommending that a bridge be built between the Catholic Church and the LGBT community.

Father Schmitz is the director of youth and young adult ministry in the Diocese of Duluth, Minnesota. He also serves as chaplain for the Newman Center at the University of Minnesota, Duluth.

The more he talks with people, he writes, “the clearer it becomes that many people in the church could do a better job of communicating her teachings with love.”

A sort of window into his book’s tone is provided when Father Schmitz writes: “We don’t want to say that wrong behaviors should be accepted as good or neutral. … On the other hand, we must be careful that in our rejection of wrong behaviors we don’t reject people, especially people who may already be marginalized.”

Father Martin’s book is a revised, expanded edition of one first published in 2017. He does not intend to offer an extended discussion of church “teachings on same-sex relationships and same-sex marriage.”

His book is neither “a treatise on moral theology” nor “a reflection on the sexual morality of LGBT people,” he explains. “I am not a moral theologian,” he points out. His book is “primarily about dialogue and prayer.”

Father Martin acknowledges that omitting “a long discussion on same-sex relations” was intentional, “because the Catholic Church’s stance on the matter is clear: Sexual relations between people of the same sex are impermissible.”

Yet, same-sex relations are “part and parcel” of life for the majority of LGBT Catholics. This teaching, theologically speaking, “has not been received by the LGBT Catholic community, to whom it was primarily directed,” he concludes.

His book, then, “is not an argument, not a debate, but an invitation to conversation and prayer, and then to ministry rooted in Jesus Christ.”

To trust in the bridge he proposes, Father Martin writes, “is to trust that eventually people will be able to cross back and forth easily, and that the (church’s) hierarchy and the LGBT community will be able to encounter one another, accompany one another and love one another.”

PREVIOUS: Survival against the odds becomes job 1 in ‘Adrift’