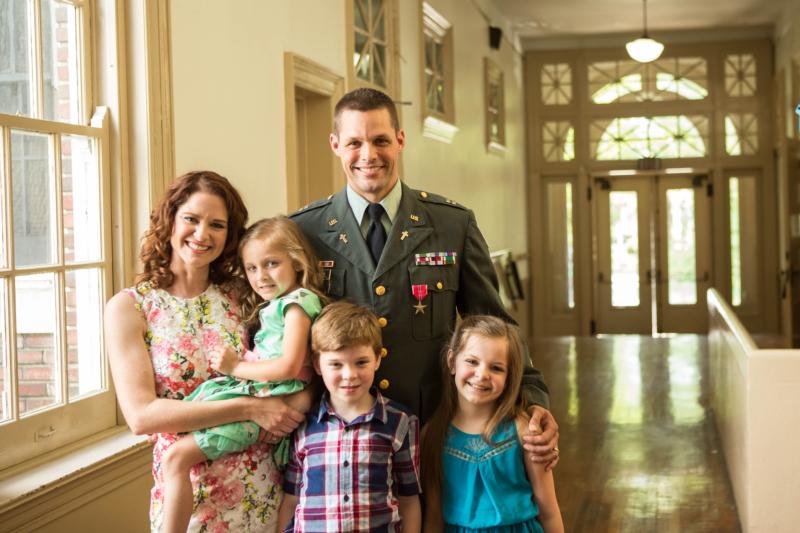 Army Chaplain Darren Turner poses in an undated photo with his wife, Heather, and their three children, Meribeth, Samuel and Ellie, after an awards ceremony for the film “Indivisible.” The film recounts Darren’s experiences as an Army chaplain during the Iraq War, how the pressures of that ministry led to the unraveling of his marriage and ultimately how that relationship was healed. (CNS photo/courtesy Provident Films LLC and The WTA Group, LLC)

SAN DIEGO (CNS) — Most people will never know firsthand what it’s like to see their real-life marital struggles played out on the big screen.

But Darren and Heather Turner do and, as Darren freely admits, “It is surreal, for sure.”

As he watched the new film “Indivisible,” which opens in theaters Oct. 26, he couldn’t help appraising the actors’ performances. At some points, he remembered things playing out a bit differently; at others, the re-enactment was astonishingly, perhaps uncomfortably, accurate.

Adding to the surrealism of it all was the fact that the events depicted onscreen all took place about a decade ago, and the couple and their relationship have changed dramatically since then.

“We’re different people (now); we’ve grown,” Darren Turner said in a telephone interview he and his wife had this summer with The Southern Cross, newspaper of the San Diego Diocese. “I definitely don’t want to repeat a lot of what you saw in the movie.”

“Indivisible” recounts Darren’s experiences as an Army chaplain during the Iraq War, how the pressures of that ministry led to the unraveling of his marriage, and ultimately how that relationship was healed as the couple began to cooperate with God’s grace.

Darren and Heather, both 45, have been married for 18 years and have three children. When they met, he was a campus minister at the University of Georgia. They got married, started a family and remained actively involved in ministry.

After the terror attacks of 9/11, they became aware of the many U.S. service members being separated from their families on long deployments, said Heather Turner. This weighed “heavy on our hearts” and filled them with a desire “to serve the people who were serving.”

Darren felt attracted to the idea of military chaplaincy, and Heather agreed that it seemed to be a good fit for a man she described as “a guy’s guy” who loved the outdoors and athletic activity and was “a bit rough around the edges.”

But the challenges of Darren’s new vocation were much greater than either he or Heather anticipated.

During a 15-month deployment, he saw many soldiers killed or seriously injured, and it began to wear on him.

As he ministered to them, he admitted, “In some ways, I neglected my own heart and my own soul.”

Meanwhile, his wife was raising their three young children, then between the ages of 10 months and 6 years old, on her own.

Heather said that just being a stay-at-home mom can be so exhausting that you “don’t have anything to give anymore” by the time your spouse comes home at the end of the day.

“That happened to us,” she explained, “just multiplied by 15 months.”

By the time Darren returned from Iraq, he had internalized a lot of anger. And he admits that he gave short shrift to the struggles that Heather had faced during his absence, believing that they paled in comparison to his own.

“We just kind of positioned ourselves in our own corners, like a boxing match,” Darren said.

The couple ultimately decided to separate.

Heather remembers it as “a very nasty and self-centered, angry separation” and, at the time, “did not see anything but divorce at the end of the road.”

It wasn’t until several months into the separation that they started on the path toward reconciliation.

Darren said that a milestone was reached when he and Heather were “broken by the cross of Jesus Christ” and were finally able to recognize one another as spouses rather than enemies.

He was “disgusted” by how he had failed to forgive his wife as Jesus had forgiven him.

“Who was I to withhold that from her?” he said, recalling the challenging question that led to his breakthrough. “That broke me and I was able to approach Heather very differently.”

For Heather, reconciliation became possible after she recognized the folly of clinging to “a marriage that I had designed in my head,” rather than accepting whatever God wanted for her. She found herself preferring an unhappy marriage, if that was truly God’s will, to the continued stubborn pursuit of her own plans.

“It turned out that the Lord’s plan was better and it didn’t force me to be in a miserable marriage the rest of my life,” Heather said with a laugh.

These days, Darren is still on active duty. But while he loves his job, he recognizes the danger of allowing it to displace his family as his top priority. The painful experience depicted in “Indivisible” taught him some hard lessons, and he now has safeguards in place.

“I make sure that Heather has permission to call me out,” said Darren, who also has friends ready to hold him accountable for any lapses.

“I’ve learned a lot,” he said. “I don’t want to go down those same roads, and I’ve got people who will speak truth to me.”