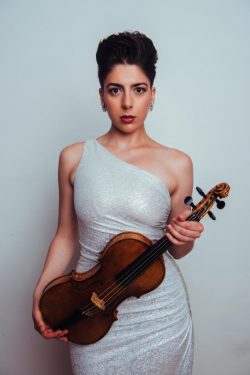 But she’s coming home to New Jersey — her hometown parish in particular — to record her first album.

The recording will take place at St. Rose of Lima Church in suburban Haddon Heights, where her mother still is involved in the parish music program.

Youssefian, 26, attended the parish school, sang in the parish children and teen choirs, and listened to the Spice Girls with her friends. She holds degrees from Oberlin Conservatory, Rice University and The Julliard School, and she makes her living as a traveling soloist, performing Bach, Haydn and Vivaldi.

She told the Catholic Star Herald, newspaper of the Diocese of Camden, that her specialty is “historical performance,” often working with musicians playing historical instruments.

Because of that, Youssefian easily can be viewed as the image of sophistication and high art. And she is given to saying things such as, “I can’t recommend Johann Sebastian Bach’s cantatas enough.”

In her spare time, she reads escapist fiction and listens to the Rolling Stones and the Beastie Boys.

Moreover, those who have seen her on stage describe a magnetic and exuberant performer. One admirer has referred to her as a baroque Lady Gaga.

Pre-performance excitement is always overcome by “a feeling of pure joy,” she said in an email interview.

Once a performance concludes, she said, “the joy is compounded with a feeling of gratefulness to my colleagues and audience for the support and love they give back to me.”

“The most rewarding part of the job for me,” she added, “is when someone comes up after a concert and says, ‘I used to think classical music was boring, but you changed my mind!'”

Youssefian grew up in an atmosphere of music and faith. Her mother is a pianist, her brother is a violinist and guitarist, and her father is a drummer and guitarist.

“My mother, Ellen Youssefian, has been involved in the music program at St. Rose Church since I was a baby, and she got me and my brother involved very young,” Youssefian said.

She started playing the violin at the age of 4 and eventually learned to improvise while playing hymns during church services.

“My favorite memories of Saint Rose are centered around my time in the choir, sharing beautiful music with my friends and the church community. Music has its own language and its own ability to touch people,” she said.

“My mom always told me and my brother that our music was a gift to be shared with the community, and I continue to remember that even in the craziness of the professional world,” she added. “I definitely consider my music as an expression of my spirituality; it has always felt like something bigger than me. I’m thankful every day that I’ve been given a gift that can bring so much joy to those who experience it.”

As a student at Oberlin Conservatory, Youssefian became interested in historical performance.

“The approach to the music and the sound the historical instruments produce is so alive, way more relative to singing and speech,” she explained. “The historical repertoire also gave us some of the most beautiful sacred music you will ever hear.”

The album she will record beginning Feb. 25 is titled “Brilliance Indeniable: Virtuoso Violin in the Court of Louis XV.” It will feature never-before-recorded works for violin and chamber ensemble by the French composer Louis-Gabriel Guillemain, a virtuoso violinist in 18th-century Paris.

Youssefian will be joined by friends Stephen Goist on violin, Matt Zucker on cello and Michael Sponseller on harpsichord.

The violinist chose to record the album in St. Rose of Lima Church for personal and professional reasons. She calls the church “the home of my musical upbringing.” Just as importantly, the church has excellent acoustics, which she considers better than a studio.

“The type of music we will be recording is for historical instruments, which sound especially beautiful in the resonance of a church,” she said.

Youssefian also will perform music from the album she is recording during a concert at the church Feb. 28.

Peters is managing editor of the Catholic Star Herald, newspaper of the Diocese of Camden.

PREVIOUS: Murky plot not as clear as ‘Glass’

NEXT: Hope speaks through best, worst of life in ‘If Beale Street Could Talk’