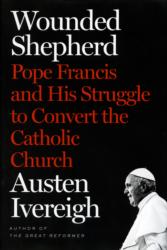 ROME (CNS) — Following up on “The Great Reformer,” his biography of Pope Francis, Austen Ivereigh is convinced that conversion is “the deepest reform” and is a process Pope Francis is trying to facilitate.

Ivereigh’s latest book is “Wounded Shepherd: Pope Francis and His Struggle to Convert the Catholic Church,” scheduled for release in the United States Nov. 5 by Henry Holt and Company.

Discussing the title with reporters in Rome Oct. 23, Ivereigh clarified both what he means by “wounded shepherd” and what he believes Pope Francis sees as his role in the conversion process.

The title was chosen at the end of 2018, which Ivereigh described as “the annus horribilis” (horrible year) of Pope Francis’ pontificate mostly because of the clerical sexual abuse crisis and the mishandling and cover-up of allegations that were revealed in Chile and the United States with the case of Theodore E. McCarrick, the former cardinal.

The publisher wanted a title that reflected “the fact that he was being attacked.” Ivereigh said he agreed to the title, not because of some political battle at play, but because Pope Francis has spoken several times about the church and its ministers recognizing their woundedness, seeking forgiveness and taking a step toward conversion.

The subtitle, he said, is an acknowledgment that “conversion” is the theme of the book and refines the title of his earlier biography because “I’ve come to learn that the deepest reform is really conversion.”

Pope Francis is “a very Jesuit pope leading the church on the Spiritual Exercises (of St. Ignatius),” Ivereigh said. “Of course, it is not the pope converting the church, as I make clear in the book. A spiritual director isn’t the one who changes the person who is on retreat. The spiritual director provides the space, the guidance, points out the obstacles and temptations. It’s God and the Holy Spirit who produce the change.”

Ivereigh met with the pope for 45 minutes in June 2018, he said; it was not an interview, but a conversation that helped in the writing of the book.

“It’s completely my take on this pontificate,” he said, although he did speak to many people “close to the pope.”

The book, he said, uses several events and issues to illustrate how the pope is trying to help all Catholics and the church as an institution come closer to Christ and to living in a Gospel style.

“Wounded Shepherd” begins with a biographical chapter, framed by Pope Francis’ visit to his family in Turin, Italy, in 2015. Then it turns to issues: the 2017 controversy within the Knights of Malta; efforts to reform Vatican finances; the ongoing reform of the Roman Curia; the clerical sexual abuse crisis; evangelization; ecology; his vision for Latin America; the synods on the family in 2014 and 2015; and the message of mercy and pushback to it.

“Synodality” — the process of listening to all voices, discussing and even arguing about issues, praying about them and allowing consensus to form — may be Pope Francis’ greatest contribution to the Catholic Church, Ivereigh said.

But mercy is “the heart of the pontificate, the heart of the Gospel of Jesus Christ according to Pope Francis,” the author said, and that is why he used the chapter to close the book.

Mercy also is “where the opposition (to Pope Francis) is at its most aggressive and vicious,” he said. “He is a pope who has provoked intense opposition, just as Jesus did.”

Those who criticize Pope Francis do so from a variety of positions, he said, but “it’s quite striking” to study the stories about the Pharisees’ opposition to Jesus in the Gospels and notice the connections and, especially, how afraid they are of Jesus.

“There are people, I think, who so badly misread the pope because of what is going on inside them,” he said. “I think Pope Francis has deeply threatened people who consider themselves good and consider themselves the guardians of Catholic doctrine.”

For the Pharisees, and perhaps for many of Pope Francis’ critics, he said, the sticking point may be that “Jesus proclaims the universality of God’s love, that religion cannot be arrogated to become an identity which is then used against people and as a way of defining me against you and, therefore, he effectively takes away their power. Or at least they feel that way.”

NEXT: ‘Countdown’ doesn’t quite beat the clock