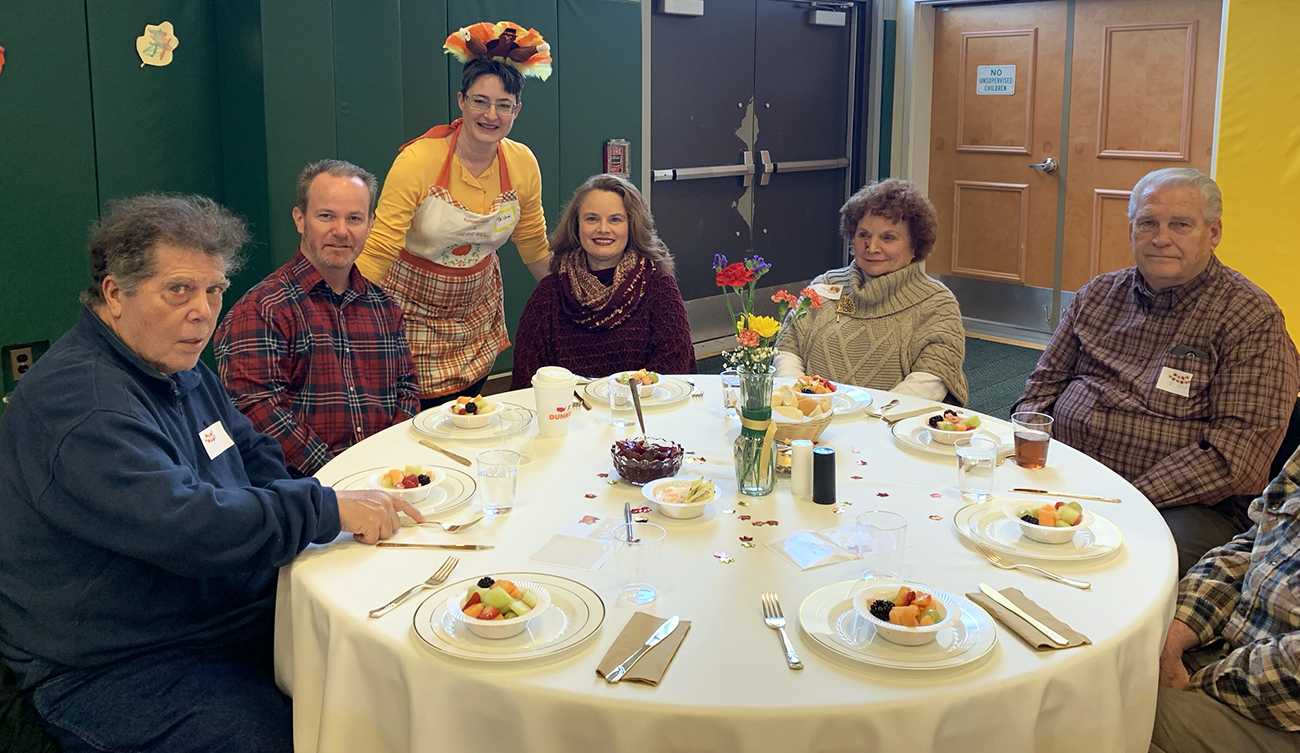 Trisha Lamb (standing) of Nativity of Our Lord Parish in Warminster greets diners at a community Thanksgiving dinner, Nov. 28. Now in its second year, the gathering served more than 100 participants, while supplying additional meals to outreaches supporting homebound seniors and homeless men. (Photo by Gina Christian)

Faithful throughout the Archdiocese marked Thanksgiving with prayer, praise and a number of outreaches.

Residents at several Archdiocesan senior housing centers got a head start on the holiday with luncheon celebrations. Some 25 gathered on Nov. 21 at St. Francis Villa in the city’s East Kensington section for a diverse array of potluck-style dishes, followed by raffles and fall-themed recreational activities.

The following day, approximately 40 residents of Nativity B.V.M. Place in Philadelphia’s Port Richmond neighborhood were treated to a Thanksgiving dinner donated by Honey’s Angels, a local outreach that provides food assistance during the holidays to a number of area social service agencies, schools and churches. The diners were served by staff from archdiocesan Catholic Housing and Community Services (CHCS), which operates five affordable senior residences as part of its continuum of care for older adults.

On the evening before the holiday, more than 25 faithful gathered at St. Joan of Arc Church (now part of Holy Innocents Parish) in Philadelphia’s Harrowgate neighborhood to reflect on their blessings. During the prayer service, which was conducted in both English and Spanish, attendees shared with one another specific reasons for their gratitude, as Sister of St. Joseph Linda Lukiewski passed around a microphone.

“Tonight, you give the homily,” said Sister Linda, St. Joan of Arc’s evangelization and Hispanic minister.

The gathering was a prelude to the following day’s Mass at Holy Innocents Parish, which was celebrated in English, Spanish and Vietnamese. 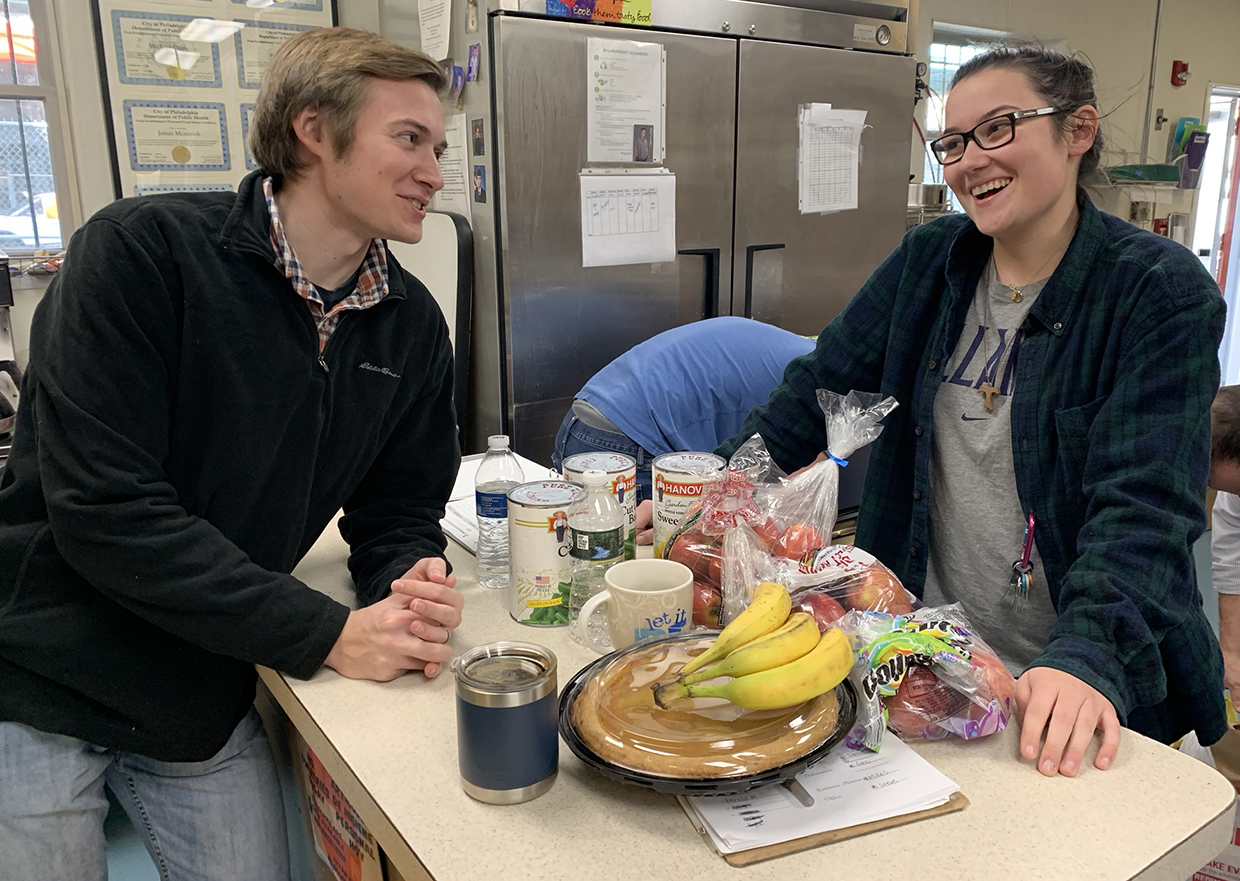 During its Thanksgiving Day liturgy, St. William Parish in the city’s Lawncrest section collected an estimated 100 bags of nonperishable food, as well as cash donations, for delivery to St. Francis Inn. The Kensington-based outreach has served hundreds of daily meals to those in need since 1979 – well before Franciscan volunteer minister MaryKate Winter was born.

“A lot of our guests have been here longer than I’ve been alive,” said Winter, who joined St. Francis staff and fellow volunteers in serving a restaurant-style Thanksgiving meal to approximately 225 diners.

“This is open to anyone; you don’t have to prove any need,” said Winter. “You come through our door, we’ll give you a meal.”

A few miles south of St. Francis, some 60 veterans in South Philadelphia enjoyed a professionally catered Thanksgiving dinner organized in part by members of area parishes at Toll Man Joe’s, a sports bar and restaurant.

Bill Mulligan of St. Gabriel Parish in Philadelphia said he launched the event six years ago after speaking to veterans at a homeless shelter. 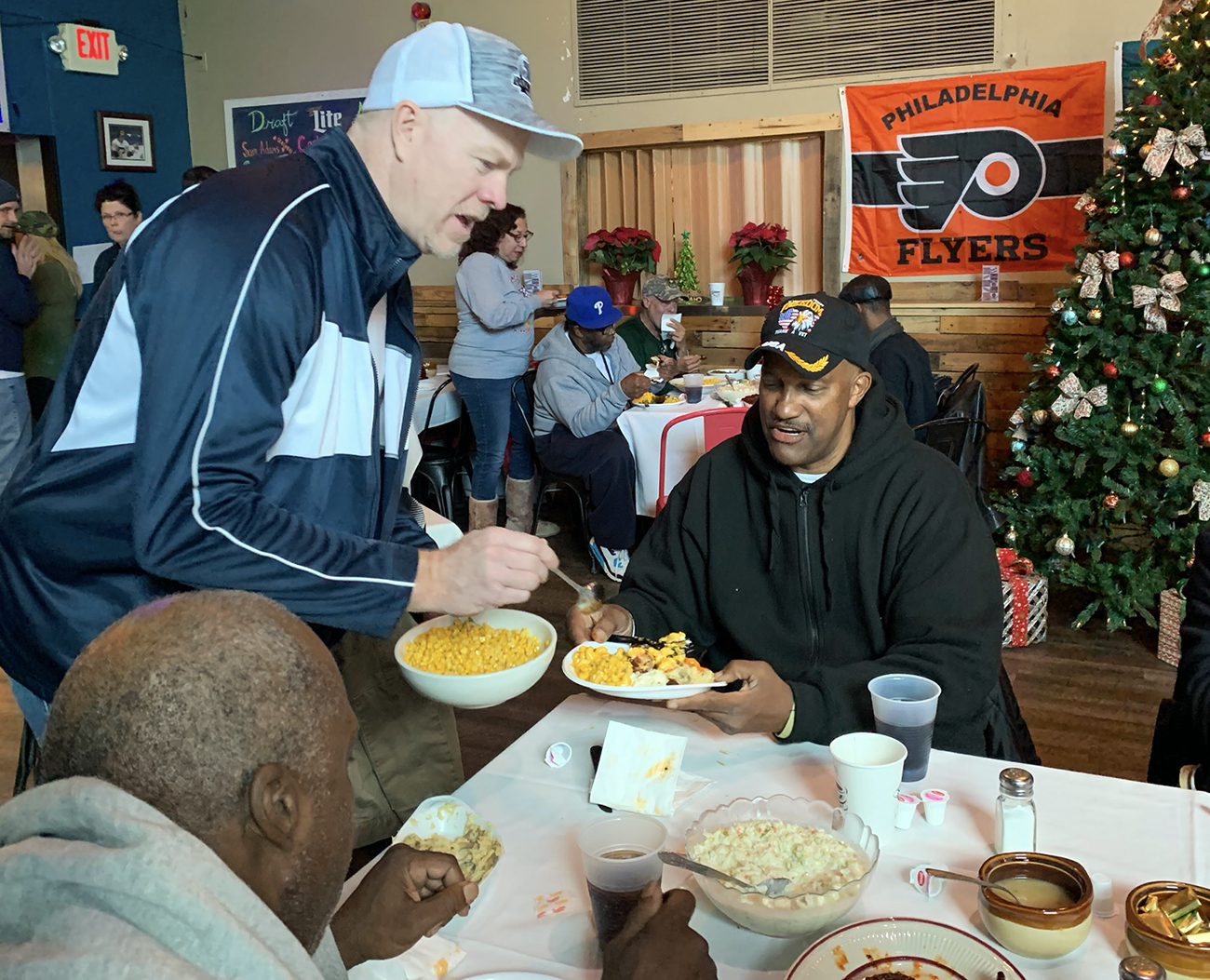 “I walked out of there and said, ‘I’ll help them the rest of my life,’” said Mulligan, who rallied fellow Mummers in the Shooting Stars Fancy Brigade for the effort. At present, 38 Mummers clubs and a number of area business partner with the annual Franny McIntyre Mummers for Veterans drive, which Mullligan said has raised over $500,000 since its inception.

Father Douglas McKay of Our House Ministries in Philadelphia blessed the veterans’ meal, noting that “our vets pay the ultimate price for our freedom.”

Citing a Chinese proverb, Father McKay said that “when you drink the water, don’t forget who dug the well,” and urged those present to recall and honor the sacrifices made by the nation’s troops.

City Councilman Mark Squilla, a member of Our Lady of Mount Carmel Parish, said that the dinner was an example of the Catholic faith in action.

“I was taught by the Sisters of Mercy how to give back, and how important it is to be of service,” said Squilla, who added that assisting others inspires an ongoing cycle of giving.

“It makes you feel good, and you want to do more,” he said.

The same sentiment was in evidence at Nativity of Our Lord Parish in Warminster, where volunteers hosted a community Thanksgiving dinner for those who might otherwise have spent the holiday alone.

Now in its second year, the dinner – at which more than 100 were served – was suggested by parishioner Trisha Lamb, an activities director at an area senior center.

“It’s for anybody who wasn’t able to go anywhere or visit relatives, or who didn’t have ability to make dinner in their home,” said Lamb. “We thought, ‘Cook it and they will come.’”

Fellow organizer Cathy Fry ensured that leftovers from the dinner were delivered to Aid for Friends, which provides food to homebound seniors, and St. John’s Hospice, a CSS outreach for homeless men in Philadelphia.

“We’re just getting the word out that Thanksgiving is about sharing and being with people,” said Lamb, while Mulligan simply said, “I can’t thank God enough. I wouldn’t be here without God.”