Nun paints icon of Mary, Undoer of Knots to offer hope amid pandemic 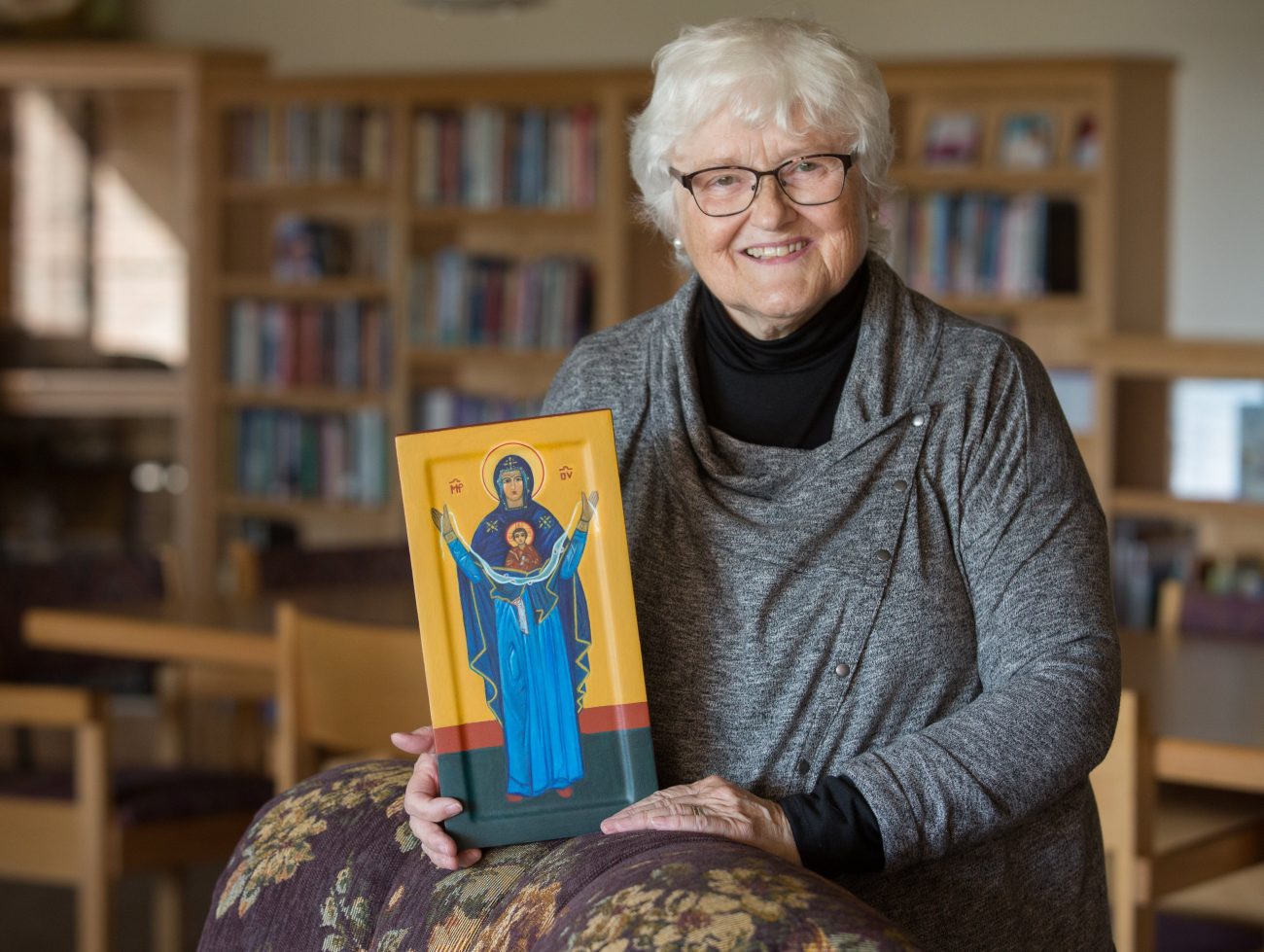 ST. PAUL, Minn. (CNS) — In a year when a pandemic has entangled lives across the globe, Presentation Sister Carrie Link painted an icon that may help Catholics straighten them out.

The icon — and a devotion — is called Mary, Undoer of Knots.

People needn’t be alone in untangling life’s “knots,” she said. “We lean into the heart of Mary, our Blessed Mother, who, through her intercession with her son, loosens them and gives us hope.”

Pope Francis is among its fans. When the pope was a student in Germany, Sister Carrie said he was taken by a 17th-century painter, Johann Melchior Schmidtner, and one painting in particular. It recalls an image that St. Irenaeus described — showing Mary untying knots.

Sister Carrie, 79, is semiretired but works at two parishes. She leads formation for the Rite of Christian Initiation of Adults at St. Henry in Monticello, Minnesota, and, one day a week, oversees liturgy at Our Lady of the Lake in Mound, Minnesota. She spends much of her free time painting.

Sister Carrie studied and practiced various forms of art for many years — from classical realism to still life and portrait work, using various media. She was introduced to the prayer and art of iconography in 1995.

She learned of this icon prototype in a class conducted by iconographer Debra Korluka at the Basilica of Mary in Minneapolis this past March, and then commenced making her own. Working on it as she had time, she finished it in June.

“It’s like a rich gold mine when you talk about iconography,” Sister Carrie said, noting her appreciation for “the history, how (the icons) came to be stories, how each person is drawn to them in different ways and which aspect of a particular icon seems to speak to them, how people like to sit in their presence.”

Working on Mary, Undoer of Knots gave Sister Carrie hope and confidence that Mary will untie the knots that bind humanity and bring people to freedom and harmony.

“Writing” is the proper way to describe what the iconographer does, Sister Carrie said, but acknowledged that those unfamiliar with the term are used to works of art being “painted.” One reason writing is used is because icons have been described as Scripture in visual form. Sister Carrie creates icons in the acrylic method, she said.

Our Lady, Undoer of Knots is about the 10th icon Sister Carrie has made. She has kept some and parted with others.

Brent Aitchison, a parishioner at St. Henry, bought the icon from Sister Carrie as a present for his wife, Lanette, on her 60th birthday in September. Lanette was taken by complete surprise when she opened her gift.

As someone who has experienced, from a young age, very difficult situations with family members and the heartbreak of infertility, Lanette knows about the need for healing. She also knows to turn to Mary’s intercession in times of need.

The Aitchisons have a statue of Mary on their deck, overlooking a koi pond. “Often, when someone is struggling, we invite the person to sit by our pond,” Lanette said. “Mary has special healing powers.”

The Aitchisons are narrowing options for the best place for the icon to adorn their home and inspire. One thing they know for sure is that it is meant to be shared.

“It would be selfish not to share it with other people,” Lanette said. “You never know when something like that is going to speak to somebody. I want her to be shared and be out where people can see her.”

Lanette said she wants to share the icon because Mary is so generous and has given up so much.

“I’m getting emotional thinking about what she did because she gave up her son. I want to give her up so other people can enjoy her,” she said.

Lanette got to know Sister Carrie in 2014 when she started the RCIA process to become Catholic. “She forever, ever, ever touched my life,” Lanette said. “She is definitely a spiritual mentor for me.”

Not one to “retire herself” or her brush, Sister Carrie presently is painting Andrei Rublev’s icon of the Holy Trinity.

Umberger is on the staff of The Catholic Spirit, newspaper of the Archdiocese of St. Paul and Minneapolis.

PREVIOUS: In ‘Star Wars: Squadrons’ game, light is right over dark side

NEXT: ‘Fishbowl’ a slow swim to nowhere