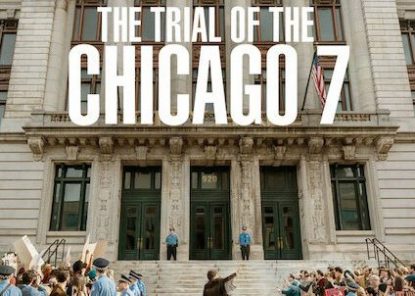 This is the movie poster for “The Trial of the Chicago 7” streaming on Netflix. The Catholic News Service classification is A-III — adults. The Motion Picture Association rating is R — restricted. Under 17 requires accompanying parent or adult guardian. (CNS photo/Netflix)

NEW YORK (CNS) — As demonstrated by the popularity of his long-running TV series “The West Wing,” Aaron Sorkin has a knack for making politics interesting.

Nearly a decade-and-a-half after that show went dark, he brings his talents to bear as the writer and director of the fact-based drama “The Trial of the Chicago 7” (Netflix).

The result is a sharp-witted, taut piece of entertainment, though one suitable only for grown-ups.

Those with long memories will recall the year 1968 as both historically pivotal and tragic. Among the many things that went awry in those 12 months was the Democratic National Convention in Chicago around which turmoil swirled.

As the party prepared to nominate Hubert Humphrey — who, as Lyndon Johnson’s vice president, seemed destined to prolong the Vietnam War should he prevail — left-wing activists such as Abbie Hoffman (Sacha Baron Cohen) and Tom Hayden (Eddie Redmayne) gathered in the Windy City determined to make their dissenting voices heard.

What followed were violent clashes that some blamed on young protesters, but others characterized as a police riot inspired by the heavy-handed approach to law and order adopted by Mayor Richard J. Daley. In the end, Republican Richard Nixon narrowly defeated Humphrey, an event Sorkin’s screenplay presents as setting the stage for the story it tells.

Defending all but Seale in the courtroom of bizarrely biased Judge Julius Hoffman (Frank Langella) is adroit attorney William Kunstler (Mark Rylance). Between the presiding jurist’s penchant for handing out citations for contempt and the accused Hoffman’s fondness for wisecracks and practical jokes, Kunstler has his work cut out for him.

Sorkin skillfully evokes the tensions of a troubled era that has unfortunate parallels to our own unsettled times and performances are uniformly impressive. But some nonlethal mayhem and consistently vulgar dialogue mark this gripping recreation as off-limits even to those mature teens who might otherwise find it an educational and easy-to-absorb retrospective.

The film contains violent civic clashes with some gore, a nongraphic sexual assault, drug use, fleeting irreverence, about a dozen uses of profanity, a couple of milder oaths as well as pervasive rough and occasional crude language. The Catholic News Service classification is A-III — adults. The Motion Picture Association rating is R — restricted. Under 17 requires accompanying parent or adult guardian.

NEXT: In ‘Star Wars: Squadrons’ game, light is right over dark side