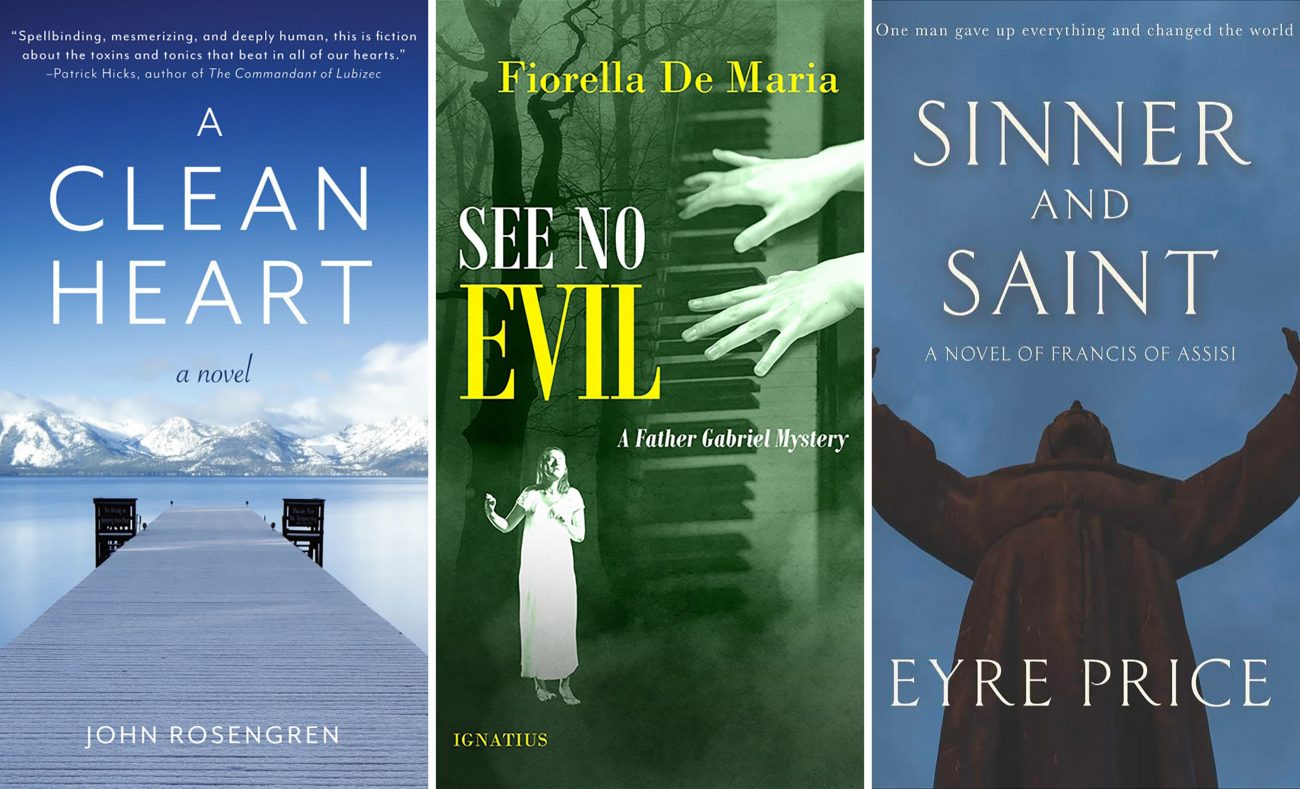 These are the covers of "A Clean Heart" by John Rosengren; "See No Evil: A Father Gabriel Mystery" by Fiorella De Maria; and "Sinner and Saint: A Novel of Francis of Assisi" by Eyre Price. The books are reviewed by Nancy L. Roberts. (CNS composite/courtesy Mango Publishing, Ignatius Press, Blank Slate Books)

This trio of novels with Catholic themes offers plenty of engaging wintertime reading.

In “A Clean Heart,” John Rosengren creates memorable characters such as Carter Kirchner, a substance abuse counselor at a drug treatment center for teenagers. Besides the usual challenges of helping his young clients navigate the road to sobriety, he also must deal with the heavy drinking of his boss, Sister Mary Xavier, which threatens both her well-being and the center’s. Then his mother is suddenly hospitalized with advanced cirrhosis, the result of her long-standing alcoholism.

As Carter faces the potentially fatal consequences of her addiction, he finds himself trying to come to terms with his dysfunctional family. Both his father and his brother have long denied that his mother’s drinking is problematic. And she has always resented Carter’s decision years ago to pass up a promising hockey career so that he could enter treatment for his own substance abuse.

Rosengren knows how to limn a character in just a few words. Of Mindy, Carter’s clueless co-worker, he writes: “Her perpetual expression was that of someone suddenly asking herself if she had remembered to turn off the iron.” And Sister Mary Xavier’s eyes are “dark-blue beams that gripped you in their gaze and would not let go until they had finished their business with you.”

“A Clean Heart” moves easily back and forth between the present and scenes from Carter’s childhood. The fast-paced narrative offers many insights about recovery and the problems that both the residents and the staff face in a treatment center.

Rosengren himself went through addiction treatment when he was 17 and also has worked in teen treatment centers, and his authentic knowledge illuminates every page.

“See No Evil” is the third novel in Fiorella De Maria’s Father Gabriel mystery series. Here, the intrepid Benedictine detective finds himself in the middle of a country house murder mystery.

It’s Christmastime, and he has gone, reluctantly, to a wealthy local family’s festive party. There he has to meet the unpleasant Victor Gladstone, a former reporter who abhors clerics and is burdened with being the sole witness to a wartime massacre.

When Gladstone is found dead the next morning, it appears at first to be an accident — but then Father Gabriel starts to wonder who among the guests might have wished him mortal harm.

Set in Europe in the years immediately following World War II, a rich period for moral introspection, the book’s strength is its nuanced consideration of moral culpability. How guilty are we when we are involved indirectly in behavior that is immoral? That’s a question that De Maria asks us to consider when she presents us with the example of property stolen from the Nazis and its subsequent sale. Along the way, De Maria rewards us with captivating descriptions of the landscape and lifestyles of postwar England, along with dialogue faithful to the time period.

De Maria, an Anglo-Maltese writer who lives in Surrey, England, has published six other books, including the two earlier Father Gabriel titles, “The Sleeping Witness” and “The Vanishing Woman.”

Perhaps not surprisingly, Father Gabriel’s character may evoke for some readers aspects of the beloved Father Brown created by G.K. Chesterton. Both are fairly simple, uncomplicated personalities who seem to glimpse truths about human nature that escape others who are caught up in the distractions of modern life. These insights prove remarkably useful in solving crimes and in helping others find their moral way.

With each of her Father Gabriel mysteries, De Maria deepens the title character’s persona, and we can only look forward to the next in the series.

“Sinner and Saint” takes on a big subject, the life of St. Francis of Assisi, about whom so much has been written. Yet, Eyre Price manages to give us a fresh take on the life of the revered saint. He eschews hagiography to give us a realistic, meaningful portrayal of the saint in all of his strengths and struggles.

We see the young Francis in conflict with his wealthy merchant father, as a hard-fighting soldier and then a prisoner of war, and as a young man struggling to find his own way of simplicity and service to others.

Also well detailed is the story of his common efforts with St. Clare to help the poor, and of his lifelong commitment to the sanctity of the natural world and the environment. Indeed, he was to become the patron saint of ecology, as St. John Paul II named him.

Price’s depiction of Francis is always compelling. His dramatization of the saint’s story is hard to put down, with dialogue that propels the narrative so well that you almost want to finish the book in one sitting.

Price, who has published three other novels, writes that he took “some factual liberties with what passes for the established history of Francis’ life and times.” His purpose in making these “embellishments” was to capture “more truly the nature of Francis’ spirit — or at least, what his spirit represents to me.”

And that is, “an (extra) ordinary man whose life of trials and tribulations remains ever relevant and whose courageous example continues to offer us a whispered, but persuasive answer to many of the questions that plague us today.”

Roberts is a journalism professor at the State University of New York at Albany who has written/co-edited two books about Dorothy Day and the Catholic Worker.

PREVIOUS: Morals and methods of police work tied up in ‘The Little Things’

NEXT: Compelling ‘Judas and the Black Messiah’ calls for much discernment