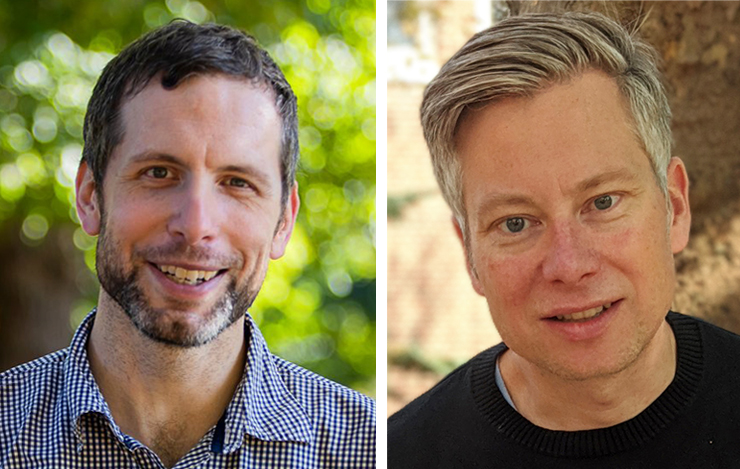 Joshua Hren (left), a fiction writer and publisher of Wiseblood Books, and James Matthew Wilson, a poet and outgoing associate professor of humanities at Villanova University near Philadelphia, are the co-founders of a new online master’s degree program in writing Catholic fiction and poetry at the University of St. Thomas in Houston. (CNS photo/courtesy Mike Mastromatteo)

(CNS) — The creation of a new master’s of fine arts degree program in creative writing at the University of St. Thomas in Houston marks a breakthrough in a resurgence of Catholic literary arts, said its founders.

The entirely online two-year, 30-credit program is being described as a significant step for the Catholic Church in North America.

“Our aim is to serve and inspire the ongoing revival of Catholic letters in our time,” said co-founder James Matthew Wilson, outgoing professor of humanities at Villanova University near Philadelphia.

Wilson will serve as head of the poetry section of the new program, while Joshua Hren, a writer and publisher of Wiseblood Books, takes on the creative writing side.

Wilson, a longtime poet with four published collections to his credit, said the quality and quantity of Catholic literary output has been meager over the past several decades, but that a revival could be in the making.

“We have great ambitions that merit attention, as this is not a time of grand schemes and projects in the church,” Wilson said, “and yet that is just what we hope to initiate — something big.”

Impetus for the fine arts program comes from concerns of Catholic academics, most notably Dana Gioia of the University of Southern California, that Catholic arts and letters in North America are in rough shape.

In his 2014 booklet, “The Catholic Writer Today,” Gioia lamented that although Catholics comprise the largest religious and cultural group in the U.S., Catholicism “enjoys almost no positive presence in the American fine arts.”

Program co-founder Hren brings experience as a writer and president of a Catholic publishing house to the project.

“We need well-made stories that make the truth about human life intelligible, tangible, definite for readers,” Hren told Catholic News Service. “We need stories that reach into our moment through a contemporary idiom but bring to bear the weight of the Catholic literary tradition to bear on these new creations.”

The new MFA at the University of St. Thomas “is a home for artists who seek to advance in such a Christic vision,” Hren said.

Jessica Hooten Wilson, instructor of humanities and classical education at the Catholic-run University of Dallas and one of the visiting scholars at the University of St. Thomas creative writing program, said the initiative should support promulgation of the Catholic literary traditions.

“The Catholic imagination is as old as the church, yet in the 20th and 21st century, Catholic writers have contributed the richest fare of great storytelling and beautiful poetry to our tradition,” Hooten Wilson said. “To join the program is to become part of that larger story and participate in a larger calling that your own success, while still being trained in how to excel as an individual writer.”

Randy Boyagoda, principal of St. Michael’s College of the University of Toronto — and author of Catholic novels and biographies — also is among visiting faculty. He told CNS the establishment of the program suggests a reawakening of Catholic arts and letters across North America.

“There is a small community of Catholic artists and writers who feel the need to promote this kind of initiative, so it’s gratifying to see it taking off like this,” Boyagoda said.

“The program is unique in offering a unified course of study that prepares students for lives as writers and teachers, editors and publishers, whose grasp of the western and Catholic intellectual tradition reaches from Plato, Virgil, and Dante,” co-founder James Matthew Wilson said, adding that despite its Catholic emphasis, it is open to applicants from all faith traditions.

The University of St. Thomas plans to launch a national campaign to promote the program, which is part of the university’s aim to renew Catholic higher education and reverse the cultural decline of the country.

The university was founded by the Basilian order in 1947, and today has over 3,000 full-time students.

Mastromatteo is a writer and editor in Toronto.

NEXT: Latest ‘Crash Bandicoot’ video game is a timely hoot