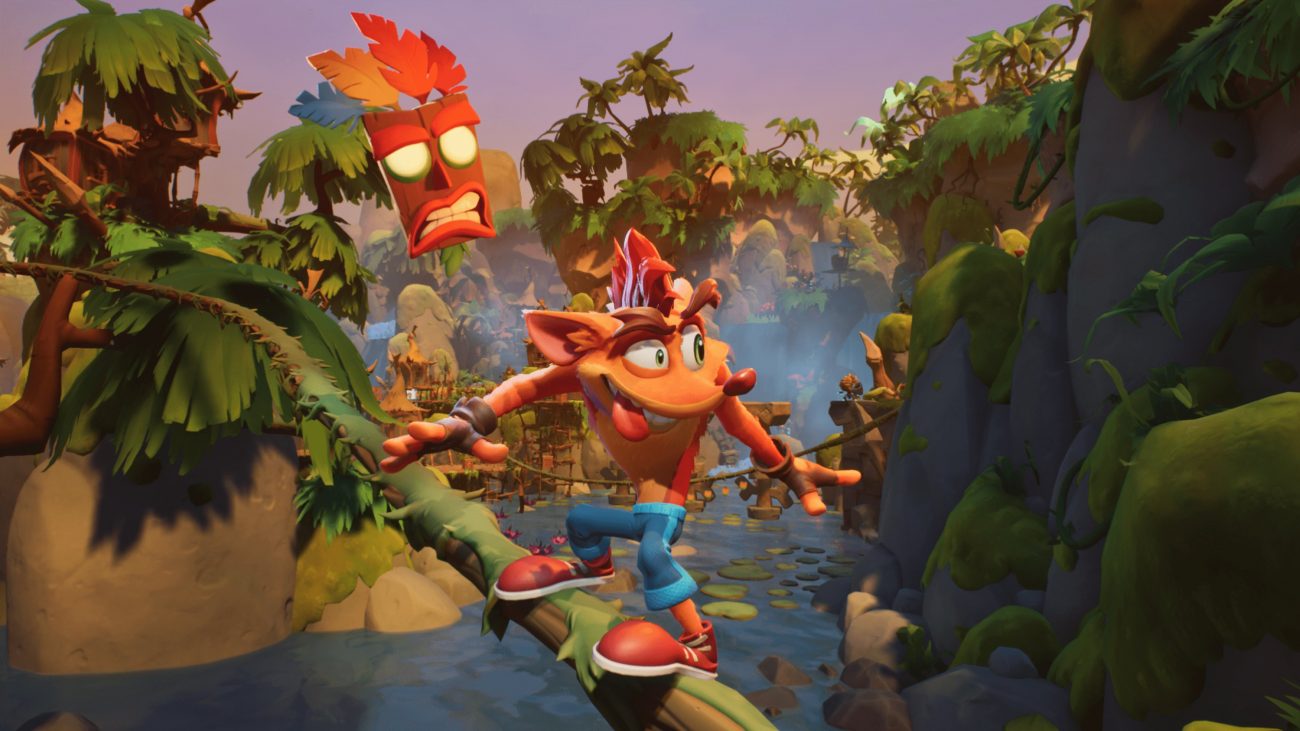 This is a scene from the video game "Crash Bandicoot 4: It's About Time." The Catholic News Service classification is A-II -- adults and adolescents. The Entertainment Software Ratings Board rating is E-10 -- for ages 10 and up. (CNS photo/Activision)

NEW YORK (CNS) — The whole fabric of space and chronology having been ripped open by villains, the stakes are high in “Crash Bandicoot 4: It’s About Time” (Activision).

Though the mayhem involved in the game’s showdowns is mild, a couple of vulgar expressions prevent endorsement of it for little kids.

The character of the title has been around for quite a while, having made his debut in 1996. Bandicoots, for the uninitiated, are marsupial animals endemic to Australia. Crash, however, was genetically modified and subjected to experiments by the heinous Dr. Neo Cortex before making good his escape.

The end of a previous entry in the franchise, 1998’s “Crash Bandicoot: Warped” (Sony), found Dr. Cortex and his two partners in crime, Nefarious Tropy and Uka Uka, locked away in a prison outside of time. Now Cortex and Tropy have managed to free themselves and are making a bid for domination of the entire multiverse.

To thwart them, Crash and his sister Coco must locate four magical beings known as the Quantum Masks. As they rush to do so, players can choose between Retro or Modern rules, with the former posing the greater challenge.

This classic platform game sees Crash racing and spinning his way across the landscape gathering up so-called Wumpa fruit and other items to navigate each level. Different tiers of rewards are available depending on how well he collects these items.

The combat style is essentially harmless. Crash jumps and kicks his opponents, while his enemies use exaggerated weapons or explode dynamite in a manner reminiscent of Wile E. Coyote’s futile attacks on the Road Runner. When either good guys or adversaries are defeated, they simply disappear in a puff of smoke.

Beyond the standard framework of good versus evil, this lighthearted title doesn’t bear much moral analysis. In addition to controlling Crash or Coco, gamers may play as negative characters. The latter are more zany than scary, however. “Pass N. Play” mode, in which up to four players can complete the main campaign together, helps promote teamwork and cooperation.

Smooth, detailed graphics, a vivid world environment and rewarding mechanics add up to technical excellence. Entertaining and accessible, Crash’s latest adventures will likely satisfy both his longstanding fans and newcomers to his story.

The game contains cartoonish violence, at least two crass terms and references to alcohol use. The Catholic News Service classification is A-II — adults and adolescents. The Entertainment Software Ratings Board rating is E-10 — for ages 10 and up.