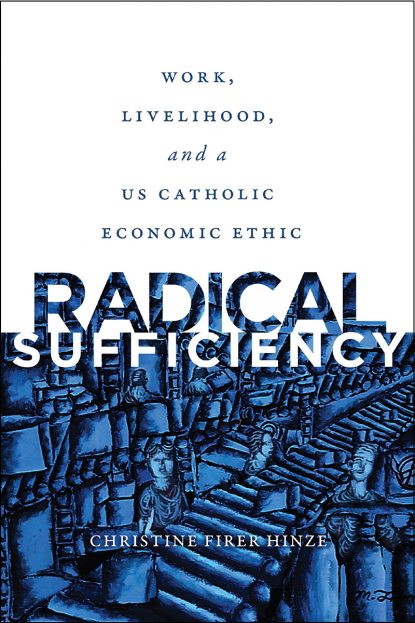 This is the cover of the book “Radical Sufficiency: Work, Livelihood, and a U.S. Catholic Economic Ethic,” by Christine Firer Hinze. The book is reviewed by Daniel S. Mulhall. (CNS photo/courtesy Georgetown University Press)

In the early 1900s, the American Catholic moral theologian, Father John Ryan, developed an agenda for labor justice “that entailed neither violent revolution nor overthrow of the market system.”

Influenced by the church’s recently expressed social justice teaching found in Pope Leo XIII’s encyclical “Rerum Novarum,” Father Ryan’s agenda would help to shape many of the economic policies of Franklin Roosevelt’s New Deal that brought the country out of the Great Depression. Father Ryan felt that his agenda was “sufficiently radical.”

Christine Firer Hinze, professor of theological studies and chair of the theology department at Fordham University, builds upon the work of Father Ryan, along with a plethora of other sources, to create a new “agenda committed to ensuring dignified work and a good livelihood to every family and household without exception,” and does so in such a way that it respects the earth and its environment.

In the book’s first two chapters, the author provides an overview of Father Ryan’s thinking, how it was shaped by Catholic social teaching and where it was lacking. She notes that while Father Ryan promoted a living family wage, he thought primarily of white males. Women were relegated to the role of homemaker, and people of color were excluded from his thinking.

Hinze notes that since Father Ryan’s death in 1945, Catholic social teaching has continued to develop, creating a “contemporary economic ethic” that incorporates “critical analysis of power, ideologies and structures,” and acknowledges and addresses social conflict, while siding “with the poor and vulnerable.”

This ethic is “radical in its inclusivity,” committed to “radically comprehensive analysis,” and “practically transformative,” she writes.

In chapters 3 through 6, the author provides an impressive array of research examining the issues surrounding how gender, race and class and inequality affects people’s ability to make an honest living. Hinze’s research shows how the current economic system is heavily weighted toward the benefit of white males. As in Father Ryan’s day, white women and people of color get an unequal share of the economic larder.

In the final chapter, Hinze presents suggestions for things that can practically be done to radically shift the economic axis and narrative so that all workers are treated equally. She notes, “A radical sufficiency economic paradigm … makes its central focus and concern the work, livelihood and economic well-being of flesh and blood people and families, no one excluded.”

An economy’s performance can best be evaluated, Hinze writes, by “the extent to which all people and families can participate in it, accessing a dignified livelihood through work that is honest, contributive and adequately remunerative and supported.”

While the economic vision presented here does represent a radical shift from current economic practice, no plan of action is presented. The author acknowledges that the book is not meant to be a plan to accomplish this agenda but “has aimed to inform, illumine and encourage” the action needed to bring about that change.

The book would have made a lot more sense throughout if this intended outcome statement had appeared in the first few pages instead of the last.

Although this is a scholarly, thoroughly researched work, it is not a heavy read. The writing is clear and concise, the information very thought-provoking. It will serve as a valuable resource in the coming years for anyone concerned with the Catholic take on the American economic system.

PREVIOUS: The head scratching ethics of ‘Lucy, the Human Chimp’

NEXT: Rom com ‘Finding You’ finds way to the heart, through Ireland