Short book sets out church’s role in Middle Ages, warts and all 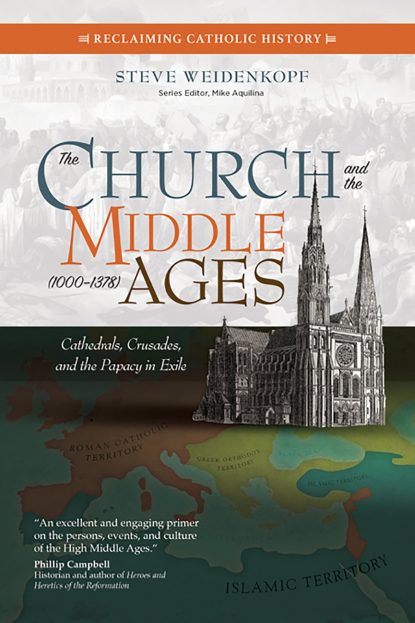 This is the book cover of “The Church and the Middle Ages (1000-1378): Cathedrals, Crusades and the Papacy in Exile,” by Steve Weidenkopf. The book is reviewed by Daniel S. Mulhall. (CNS photo/courtesy Ave Maria Press)

There are many ways to write about history. Some authors present a chronological progression of events while others offer the “great man” approach in which they tell how specific actors shaped the world.

Some wish to tell a coherent story, to show that because of this string of events a climactic outcome was destined to occur, while others present just the facts allowing the reader to make her or his own decisions about the significance of events.

Steve Weidenkopf in “The Church and the Middle Ages” presents a mostly chronological look at the Catholic Church’s role in shaping the years between 1000 and 1378, through the lens of the men and women who played key roles. Because the major emphasis is on the role of the church, the focus is primarily on Western European events.

Although he has written a short book, Weidenkopf covers a great many important events, including a brief overview of life and worldview of people living during the period covered, the reform of the papacy, the Great Schism between the Eastern and Western branches of Catholicism, the Crusades and the Inquisition.

As books have been written on each of these topics separately, telling their combined stories well in under 200 pages is a challenge that the author meets, often very well.

This book is part of the publisher’s Reclaiming Catholic History series, which aims to “bring church history to life, debunking the myths one era at a time,” according to its introduction.

Thus, Weidenkopf includes a “You Be the Judge” feature in each chapter that seeks to clarify the motive for various events. Also included in each chapter is a longer feature on one person who played a significant role. As one might expect from a series that seeks to correct the record, there is a pro-church bias in how events are portrayed. The Inquisition is even portrayed in a positive light and justified.

A danger in covering so much ground in so few pages is that some topics get little attention or comments are left unexplained.

For example, while the creation of the great Catholic universities is mentioned, little is said about the almost explosive development of thought that occurs during this period that led to the amazing flourishing that was the Renaissance. Another example appears on page 60 when the author writes about “a grueling four-month death march” without explanation.

This is an amazing period in the history of the world in which the Catholic Church played a major part. The foundations of the modern world were laid during this period, so to understand what is happening today it is vital to understand what happened then, warts and all.

For those seeking an introduction to the history of the medieval period, this book provides an “engaging primer,” as the front-cover blurb asserts.

PREVIOUS: ‘The truth’ on UFOs is out there, on Showtime

NEXT: Long film on the ‘Queen of Soul’ earns viewers’ ‘Respect’