‘The truth’ on UFOs is out there, on Showtime 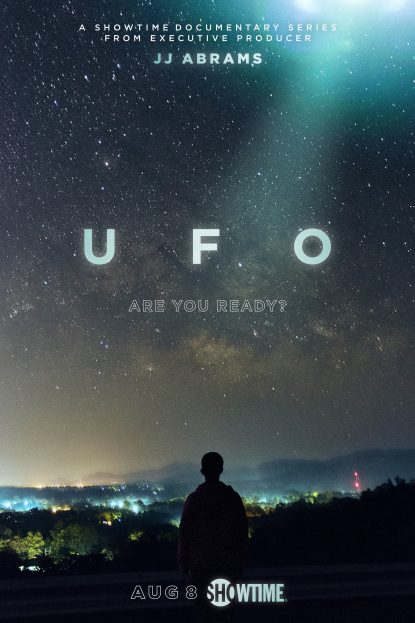 This is a promotional poster for the television show “UFO,” premiering on Showtime Aug. 8, 2021. (CNS photo/courtesy Showtime)

NEW YORK (CNS) — “The truth is out there.” Even those who never saw the popular 1990s Fox science-fiction drama “The X-Files” are familiar with its famous catchphrase.

The four-part docuseries “UFO” makes the point that the search for evidence of extraterrestrial life has, for too long, been a pursuit shrouded in secrecy and dismissed as eccentric.

Co-produced by J.J. Abrams’ Bad Robot production company and Zipper Bros. Films, the show premieres Sunday, Aug. 8, 9-10 p.m. EDT on the Showtime pay-cable channel. It will air in that time slot each Sunday through Aug. 29.

Mark Monroe and Paul Crowder direct the program, which opens with archival footage of the Apollo 17 crew walking on the moon Dec. 17, 1972. One astronaut is heard asking: “What are those things going over? It just came flying over the top of our heads.”

Back in the early ’70s, the filmmakers suggest, if even as respected a figure as a NASA astronaut had claimed to have seen a UFO, he would have been ridiculed. Today, a very different atmosphere prevails.

According to the narrative, two seminal events contributed to this change. The first was the CIA’s January 2016 declassification of all its UFO reports — information that investigative journalist John Greenewald then warehoused at his website, The Black Vault.

The second was the publication of a New York Times article in December of the following year. It revealed the existence of the Pentagon’s semi-clandestine Advanced Aerospace Threat Identification Program.

Begun in 2007 under the sponsorship of Sen. Harry Reid, D-Nev., then the Senate majority leader, the AATIP’s mission was to track UFOs and identify any danger they might pose. In the wake of the Times expose, the AATIP’s enigmatic director, Luis Elizondo, resigned, citing a lack of adequate resources for the program.

Appearing on CNN soon after, Elizondo observed that, in his opinion, there is “compelling evidence we may not be alone.”

Using extensive testimony and commentary from eyewitnesses and journalists, as well as reenactments, the filmmakers highlight some of the more notorious incidents that seem to point to the reality of UFOs.

These include the so-called the Phoenix Lights episode. On the night of March 13, 1997, many Arizonans reported seeing an object in the sky with “five lights in a triangular pattern,” as an anonymous caller from Luke Air Force Base described it the next day.

He also said two F-15 fighter planes had been launched. After that, he continued, “All hell broke loose, and the base was locked down.”

The basic topic would likely be an alarming one for small fry, who would also be upset by references to the mysterious mutilation of animals. Parents of older kids may have to weigh the show’s potential educational value against the presence of some vulgar language in the first two episodes reviewed. But the series is certainly acceptable for most adults.

The show’s breathless opening does little to ground viewers in its subject matter. They may wish for the presence of a narrator who might have slowed down the pace and offered more context.

But the program becomes increasingly intriguing as it continues. Thus, by the time it turns to recounting eerie events at Utah’s 480-acre Skinwalker Ranch, “UFO” will likely have hooked much of its audience.

NEXT: Short book sets out church’s role in Middle Ages, warts and all