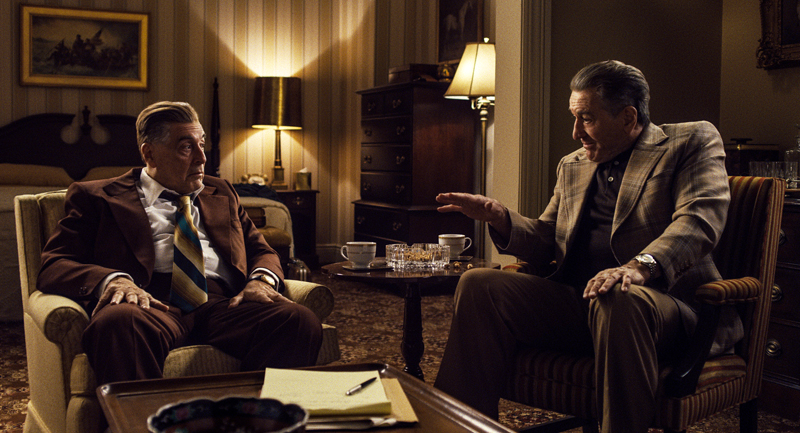 Al Pacino and Robert De Niro star in a scene from the movie “The Irishman.” The Catholic News Service classification is L — limited adult audience, films whose problematic content many adults would find troubling. The Motion Picture Association of America rating is R — restricted. Under 17 requires accompanying parent or adult guardian. (CNS photo/Netlfix)

NEW YORK (CNS) — The disappearance of union boss Jimmy Hoffa, who vanished without a trace in 1975, has never been explained. But that doesn’t deter director Martin Scorsese from solving the mystery in “The Irishman” (Netflix), an epic historical drama.

Scorsese and screenwriter Steve Zaillain work off of Charles Brandt’s 2004 nonfiction book, “I Heard You Paint Houses,” based on the life of Frank Sheeran (1920-2003), a labor union official and erstwhile gangster whom Hoffa befriended. “Painting houses” is mob parlance for murder; the “paint” that mobsters use is the blood that splatters when a victim is pumped with bullets.

Scorsese is in familiar territory here, having canvassed this dark underworld in films such as “Goodfellas,” “Casino” and “The Departed.” But the tone of “The Irishman” is quieter, even hushed. It’s more of a detailed character study than a relentless shoot’em-up (the body count is still high, but the camera does not linger long on the victims).

Herein is a major problem for viewers of faith. “The Irishman” chronicles the intersecting lives of three very bad men, each devoid of conscience and possessing zero remorse for their evil actions. Loving families surround each, and the impression of “normalcy” as they go about their “business” leaves a bitter taste.

Nonetheless, with Scorsese at the helm, “The Irishman” is an acting tour de force with stunning cinematography (although, at 210 minutes, the film is an endurance test). The story is narrated by an elderly, ailing Sheeran (Robert De Niro) and largely told in flashback, requiring sophisticated computer technology to “de-age” the actors to appear to be their younger selves.

After service in World War II, Sheeran is a truck driver in Pennsylvania in the 1950s, delivering sides of beef to restaurants. Before long he’s making deals and taking bribes, attracting the attention of powerful men.

One of these is Russell Bufalino (Joe Pesci), the local crime boss. Bufalino takes a shine to Sheeran, and offers him hit jobs.

Working for the mob comes naturally to Sheeran. “It was like the Army,” he says. “You followed orders. You did the right thing. You got rewarded.” We learn that Sheeran was also trigger-happy with prisoners during the war.

Bursting on the scene is Hoffa (Al Pacino), the ebullient president of the International Brotherhood of Teamsters union, whose members, like Sheeran, drive trucks. Hoffa has an instant rapport with Sheeran, who becomes his bodyguard and confidant.

Before long both Hoffa and Bufalino are competing for Sheeran’s attention and loyalty. In the meantime, there’s a new president — another so-called “Irishman,” John F. Kennedy — and his assassination leads to whispers about a conspiracy involving both the mob and the unions.

“The Irishman” meanders towards a shocking betrayal which suggests what happened to Hoffa. It then concludes on a surprising note.

An unnamed Catholic priest (Jonathan Morris, who in 2019 asked for dispensation from the clerical state) visits Sheeran, now near death in a Catholic nursing home. Viewers may be expecting a full confession from Sheeran of his crimes — and reconciliation with God.

The cleric (aware, like most, of Sheeran’s controversial past), invites Sheeran to express remorse for his past actions and the suffering of his victims’ families. Sheeran twice refuses.

“I think we can be sorry,” the clergyman persists. “We can be sorry, even when we don’t feel sorry. For us to say, to make a decision of the will, ‘God, I am sorry. God, forgive me.'”

While it is not clear if this conversation takes place within the context of confession, if the priest’s implication is that an insincere apology can be a path toward absolution, that’s just plain wrong.

The Catechism of the Catholic Church is crystal clear: “Among the penitent’s acts, contrition occupies first place. Contrition is ‘sorrow of the soul and detestation for the sin committed, together with the resolution not to sin again'” (1451).

Dissembling and relativism have no place here. Why Scorsese bothered to include this scene is puzzling, especially as Sheeran, once again, turns down the opportunity to come clean.

NEXT: In ‘Arise,’ gamers move through times of old man’s life